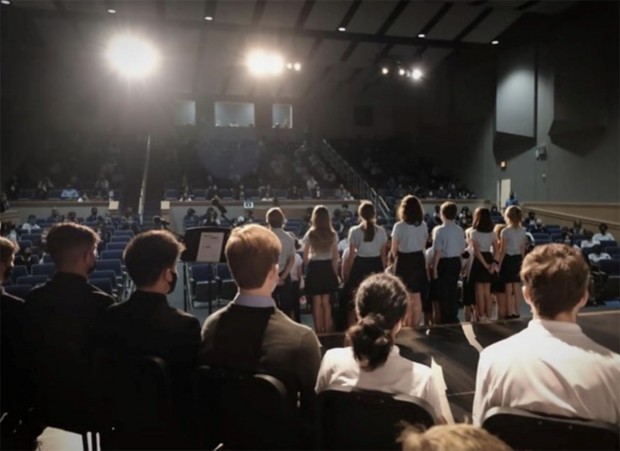 BISH students in the Remembrance Day assembly, during the primary student’s choir performance. Forefront are a few of the student presenters.

Nov. 11, 1918 at 11 a.m. is a moment in history when the world laid down its arms and tried to start anew. Now, on this same date each year, we spend time to remember those that were lost and those who were never found. We may not have known them or their history, but  we thank all the brave soldiers that gave their lives protecting our country. That is why every year on the 11th of November at 11 a.m. we play the trumpet and have two minutes of silence.

Additionally, we wear red poppies from the last Friday in October to Nov. 11 because of the red poppies that now spread over the battlefield that now serves as graves. Red poppies are also the symbol of remembrance; however, it is not the only poppy the world will be wearing this year. Many will be wearing white, black, and purple poppies. White symbolises the support for peace, black specifically focuses on commemorating African and Caribbean soldiers, and purple is for commemorating animals that were lost during the war.

We also remember the lost by all joining in on a two-minute silence at 11 a.m. on the day. This moment of silence is observed all around the world as the time to reflect and remember.

At BIS Houston, we do take part in the poppy wearing and the two-minute silence. We also meet for a very special assembly. This year, BIS Houston’s assembly included 2 choir performances, one from the secondary and the primary choir; a special violin piece played by a secondary student; a reading of the poem Flanders Fields by John McCrae; and students presented information on why we commemorate Remembrance Day each year. Overall, it was an extremely sentimental assembly, and I am sure it touched the hearts of many of the students at BIS Houston.