The return of a 71-year-old tradition: the Kinkaid-St. John’s game 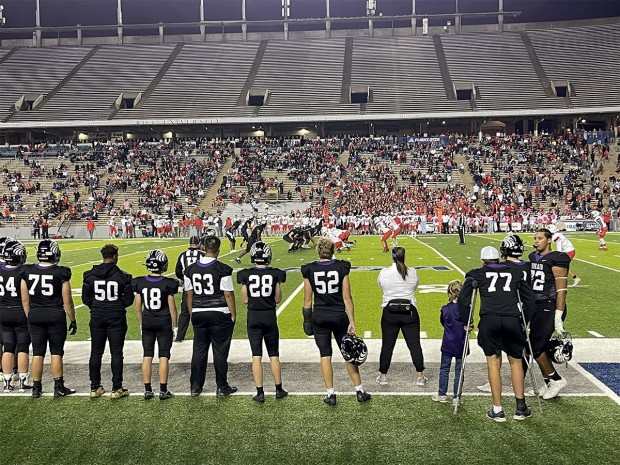 The sound of the vuvuzela rose in harmony with the excited shouts of spectators and cheerleaders alike on the night of Oct. 29. The Kinkaid Falcon football team stood proudly on the west sideline, their opponents, the St. John’s Mavericks, adorned in white and red uniforms on the opposite side.

As the teams lined up for kickoff, Kinkaid Upper School history teacher Mr. Ted Curry’s voice rang out over the loudspeaker at Barnhart Stadium.

“Friday night, under the lights! Where would you rather be than right here, right now?” he said.

In a continuation to their winning streak, The Kinkaid Falcons won 34-24 against the St. John’s Mavericks.

Spirits were high at both ends of Rice Stadium, as the game returned to its traditional venue at full capacity for the first time since the pandemic began. The anticipation for the return to Rice, which was not a guarantee at the beginning of the 2021-22 school year, was evident among the Kinkaid athletic community.

“I think the community experience that is generated with us playing at Rice was definitely the biggest thing that we missed last year,” said Mr. David Holm, director of athletics at Kinkaid. “It goes without saying that our return to Rice provides even more hope that we are moving in the right direction and towards a type of normalcy for some of our most favorite traditions.”

Players were excited as well.

“It feels awesome,” said Alex Gottegen, captain of the Kinkaid varsity football team. “Rice Stadium is such a big part of the St. John’s versus Kinkaid rivalry. Being able to compete there one last time is going to be super special for us seniors.”

The game was a close one, with spectators’ eyes glued to the field, even abandoning their Dippin’ Dots and Papa John’s. And rightly so! With a 7-1 record (3-1 in the Southwestern Preparatory Conference, the same as the Falcons), the Mavericks have one of the best football teams they have had in the past decade. Though St. John’s had a slight lead at the beginning (6-0), strategic plays brought the scores to a close 24-27 soon after halftime, and to 34-24 at the end of the game.

The Falcons won on Nov. 6 against the Episcopal School of Dallas, the team which gave both the Falcons and the Mavericks their one and only SPC loss, for the SPC championship. For the Mavericks, the season is over.