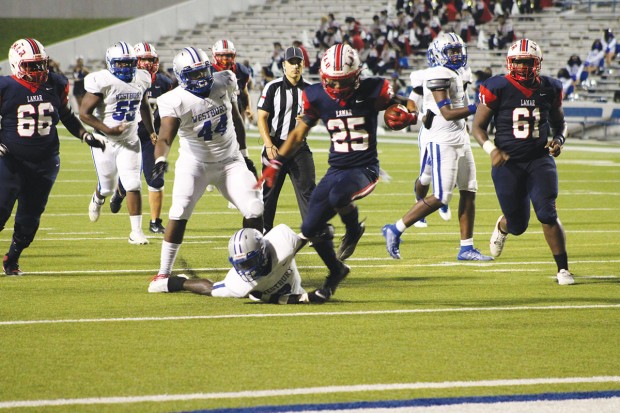 TEXANS TRIUMPH Lamar Texans running back Jeremiah Russell high steps his way in for a touchdown in the Texans’ district win over Westbury. Lamar went on to capture its 11th district championship in the last 12 years.

With their 19-7 victory over the Heights Bulldogs, the Lamar Texans reclaimed the district 18-6A football championship while marking the Texans’ 11th district title in the last 12 years.

“We had the district championship circled as a big-time goal, and our kids played really great. It’s extremely special to come back and win the title,” said Texans head coach Mike Lindsey.

The victory avenged last year’s loss to the Heights Bulldogs, which, at the time, had ended the Texans’ remarkable 72-game district winning streak.

“We’ve gone through a lot of adversity to come back and win this year’s district championship,” said Lindsey. “Our program was shut down back in August for a couple of weeks due to Covid, which forced us to miss both of our pre-season scrimmages. Plus, we had several injuries, including the loss of two of our top seniors to season-ending injuries. Our team has rallied around each other, and the culture and atmosphere here at Lamar is really strong.”

Offensively, the Texans were led by a strong season from running back Kenneth Kennedy. “Kenneth has come on to play his best ball when it mattered most,” said Lindsey. In addition, Lindsey had high praise for offensive tackle Orion Irving, who made a smooth transition from defensive line to offense this season. On defense, Lindsey credited senior safety Kobe Jones with an outstanding season. A three-year starter, Jones was a finalist for the Touchdown Club of Houston’s Defensive Player of the Year award. 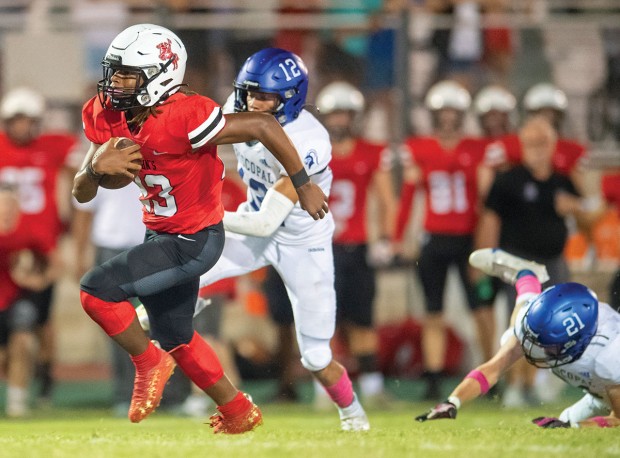 Despite a 34-24 defeat to the Kinkaid Falcons in the regular-season finale, the St. John’s Mavericks put forth their winningest season in recent history. The Mavericks went 7-2 on the year, highlighted by a thrilling 24-20 victory over the rival Episcopal Knights, marking the first win for St. John’s over Episcopal since the 2011 football season.

“It was one of those games our guys had circled long before the season. To beat your rivals at home for the first time in a decade is pretty special,” said Mavericks head coach Kevin Veltri. “It was a great atmosphere, on a fun and exciting night for our entire community.”

“It’s definitely fantastic,” said Mavericks senior Stephan Gustafson. “It’s taken a long time to get over that hump, and it was definitely a team effort. We’re all especially proud of this win.”

It was an especially proud season from start to finish for a resurgent St. John’s football program. “We’re all really close, and it took an effort to bring this team together,” said Gustafson. “We started having Zoom calls last November, and then workouts began in December. We had team outings and even went to a waterpark together last May. We really are a brotherhood.” 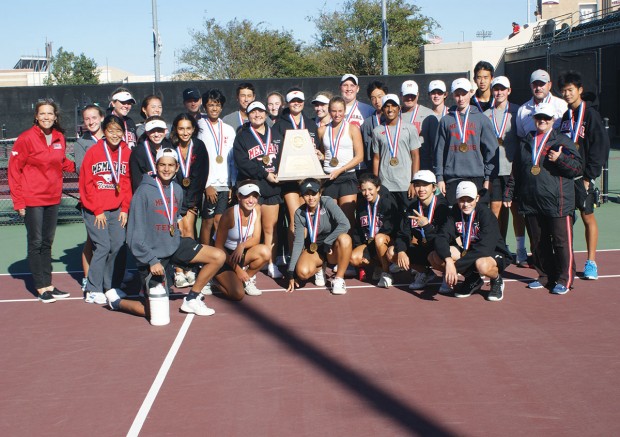 The Memorial Mustangs continue to make their mark as one of the state’s powerhouse tennis programs, having advanced to the 6A state tennis tournament for an amazing 13th consecutive year. This year’s team ultimately fell to Lake Travis in the state semifinals but not before winning yet another regional championship to advance to the state final four. The Mustangs previously won state championships in 2017 and 2019.

“I’m extremely proud of this team,” said Mustangs tennis coach Budd Booth. “Like every year, our team has a target on its back since we’re always one of the state’s top teams. Even so, these kids elevate their game when it matters the most. They do what is needed to be successful, including three-hour practices daily, weight training, nutrition, and just about whatever it takes to be a great athlete. To advance to state for 13 straight years is pretty amazing.”

To get to the state tournament this year, the Mustangs put forth a simply dominating 10-1 victory over a highly regarded Clements Rangers team in the 6A regional finals. Among those leading the way were senior girls captain Hallie Jeffers and senior boys captain Eric Kuo. Both Jeffers and Kuo have signed to play collegiate tennis at Washington University in St. Louis.