The Story Behind Charlie’s Altuve Pumpkin 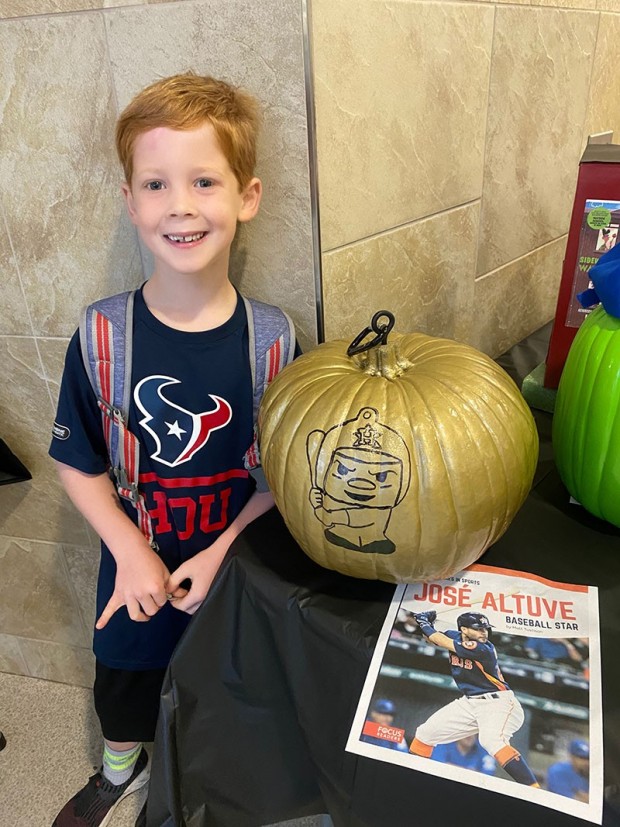 Charlie Luberger is a huge Astros fan and created a Jose Altuve pumpkin for the Wilchester Elementary's Storybook Pumpkin Contest.

When first grader Charlie Luberger was brainstorming what to create for Wilchester Elementary’s Storybook Pumpkin Contest, he knew he wanted to focus on his all-time favorite subject: the Astros. Students were encouraged to decorate a pumpkin representing their favorite literary character, so Charlie read Biggest Names in Sports: Jose Altuve, Baseball Star by Matt Tustison and depicted Jose on his pumpkin.

Reading and learning more about Altuve made Charlie look up to his favorite baseball player even more. Charlie decided he couldn’t just make a regular Altuve pumpkin. He wanted to make him into a Squeezymate – the latest trend in his friend circle. SqueezyMates are collectible, slow-rising foam figures that feature the names, numbers, and likeness of professional football players. Charlie and his friends love to learn all the stats about the players and trade them amongst each other. The rarest ones are gold, so there was no question that Altuve would be a golden Squeezymate. After finding the perfect pumpkin (which took multiple trips to the store), Charlie and dad Chase worked together on their golden masterpiece.

Charlie has been playing baseball for a few years and has been falling more and more in love with the sport. This spring, he played on SBMSA’s Red Sox team so during the ALCS series, he felt conflicted because he really liked playing on the Red Sox team and wanted to wear his jersey. His dad explained the importance of representing the home team; ultimately, Charlie was thrilled the Astros won the ALCS and progressed to the World Series. 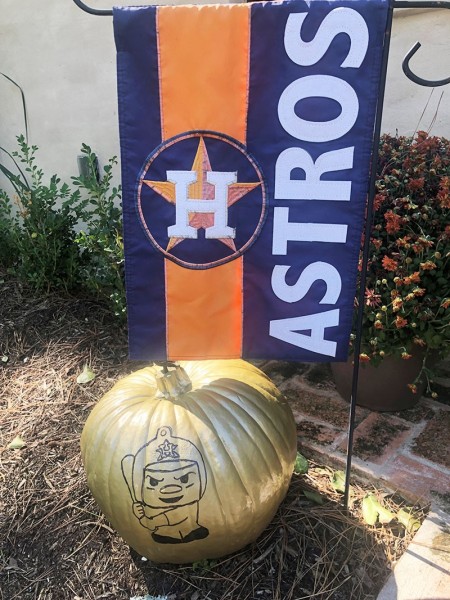 The Luberger family were out of town over Halloween weekend, so a friend put the Altuve pumpkin in their front yard to bring good luck to the Astros

Charlie, along with brothers Oliver and Sullivan, and parents Chase and Caitlyn, have been closely following the Astros’ journey this season and hope the special pumpkin will be a good-luck charm to the Astros. The Luberger family were out of town over Halloween weekend, so a friend put the Altuve pumpkin in their front yard to bring the Astros golden vibes.

Storybook Pumpkin voting has taken place but results haven’t been shared yet. Regardless of the contest results, Charlie is focused on another outcome: The World Series. Here’s to hoping his golden pumpkin continues to bring our ’Stros good luck!