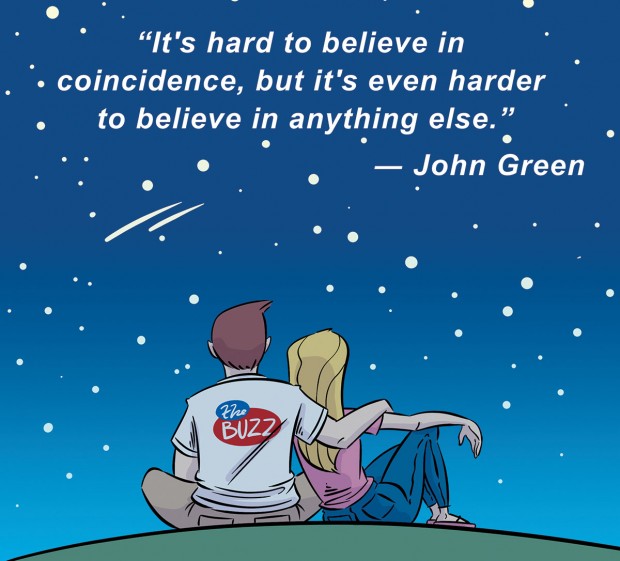 HAPPY CHANCES The young-adult novelist John Green weighs in. Coincidence, synchronicity, divine guidance…. However you define them, serendipities are all around us. (Illustration: behance.net/runamokstudios)

There’s an episode of Seinfeld where Elaine, Jerry Seinfeld’s fictional best friend played by Julia Louis-Dreyfus, debates: Are there small coincidences and big coincidences? Are there degrees of coincidences? What is a coincidence anyway?

And then there are those of us who believe those synchronicities are signs from God – or angels or the Universe – sending us messages and guiding us.

Whatever we believe, whether we see coincidences, synchronicities, or signs from God, when we watch for chance events, big or small, they are everywhere. The key is watching, and noticing.

Melanie Herz Promecene wrote Grit & Magic: A Mother’s Story of Modern Adoption, and in it details the numerous “God winks,” too numerous and incredible to ignore, that led her to her son, after years of wanting to become a mother. “I wrote the book with the intention of sharing these synchronicities with my son, so he would one day understand that we were meant to be together,” Melanie says. “We are all interconnected, though we may not realize the intricacies. If we are actively present, we can find signs all around us. Some more obvious than others, but just as significant.”

Another friend was recently prepping for a talk she was giving to a group of women on behalf of the nonprofit organization she founded. She was struggling to write the talk, trying to determine how to meaningfully intertwine the stories of her career path, mental health, and the importance of perspective. As she wrote the speech, a photo from several years ago of her and Brené Brown, her inspiration, kept popping up on her phone. “She is my ultimate for speaking,” the friend said. “I just don’t think that is a coincidence.”

For some of us, these little events imbue our lives with meaning. For others, they are random happenings, unrelated, maybe interesting, but nothing more. Is it a sign from God? Or is it a mere coincidence?

Dr. Bernard Beitman, visiting professor at the University of Virginia and former chair of the Department of Psychiatry at the University of Missouri-Columbia, has spent his career researching coincidences and says about a third of us notice them regularly. In his book Connecting with Coincidence: The New Science for Using Synchronicity and Serendipity in Your Life, he says that there are personality characteristics and situations – if a person is religious or spiritual, or if they are actively seeking meaning in life – that make us more likely to experience coincidences. “These characteristics … have proven to be so consistent that I realized we actually do – and can – make our own coincidences,” Beitman says.

“I know there’s something more going on than we pay attention to,” he tells The Atlantic’s Julie Beck. “Random is not enough of an explanation for me.”

Laura Lynne Jackson is the author of the New York Times bestsellers The Light Between Us: Stories from Heaven, Lessons for the Living and Signs: The Secret Language of the Universe, both of which share uncanny, unexplained stories that, for many, confirm something bigger going on, and, for others, at least prompt the question: What is going on?

In a podcast interview with Goop, Jackson says, “Your life isn’t just about your life. It’s about how you’re interconnected with other people, how you’ve affected other people. Every action and every thought we have matters. It all contributes to this collective energy we have going on in the world.”

Starting the year sifting for meaning amid chaos seems especially appropriate this year. We might vow to shift our thinking to pronoia, the idea that, opposite to paranoia, all the little connections are conspiring to help us. By thinking in terms of pronoia, we train our brains to seek out what you might call happy coincidences.

Fun, at the very least, and potentially inspiring and affirming of something bigger, connecting us all.

The sociologist and prolific author Martha Beck asks (and I paraphrase): Should we stay open to the possibility of magic? How do we do that without flinging reason aside?

Just as a start, maybe the answer is to pause, briefly but consistently, and notice the connections. By looking up from our to-do lists and paying attention, we can bring a little bit of magic into our everyday.