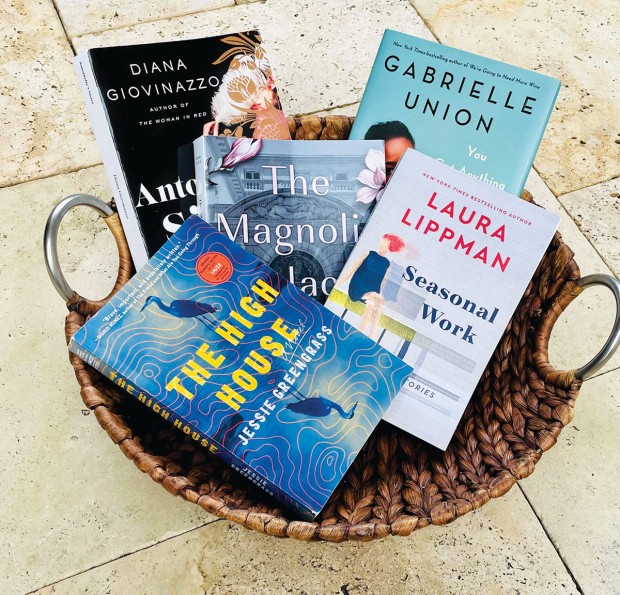 WHAT TO READ This month's picks include a fabulous short story collection, a cautionary climate tale of fiction, an engaging memoir, and two historical-fiction books, one set at the Frick Collection and the other about the infamous Queen Charlotte of Naples.

Antoinette’s Sister by Diana Giovinazzo – While everyone is familiar with Marie Antoinette, her sister, Queen Charlotte of Naples, is much less renowned. The daughter of the formidable Habsburg ruler Empress Maria Theresa of Austria, Maria Carolina Charlotte is groomed from birth to extend her family’s power and influence through marriage. When older sister Josepha dies, Charlotte is forced to marry King Ferdinand IV of Naples, a simple and easily influenced individual, and she finds herself thrust into the role of Queen of Naples amid power struggles, economic turmoil, and political uprisings. Antoinette’s Sister brings Queen Charlotte and Naples vividly to life as well as portraying the Habsburg family’s influence and domination in the political arena during this time period, creating a fascinating and compelling read.

The High House by Jessie Greengrass – The High House, a new addition to the expanding genre of climate fiction, is an unsettling, character-driven story.  Francesca, a famous environmental scientist/activist, is preparing for the widespread disaster that will be coming due to climate change. Frustrated by a world that refuses to act, she begins to secretly prepare a house she inherited in the country for her son Pauly and stepdaughter Caro to retreat to once the rising tides arrive. When a cataclysmic disaster wipes out portions of the country, Pauly and Caro head to the High House to escape and meet the two caretakers, Sally and Grandy, individuals Francesca hired to look out for her children. The two pairs learn to live together in the wake of tragedy, dwindling supplies, and an uncertain future. The High House is a quietly powerful novel that will stay with me for a long time.

The Magnolia Palace by Fiona Davis – Fiona Davis sets each of her historical-fiction novels in an iconic New York City building, and her latest takes place at the Gilded Age home of industrialist Henry Frick. Using a dual-timeline format, Davis toggles between 1919, when the Frick family still lives there, and 1966, when the home has become the magnificent Frick Collection, a museum still in operation today. In the later timeline, a Vogue photo shoot is occurring, and when one of the models is fired along with a museum curator, they stumble across a hidden message that leads them on a hunt that uncovers the truth about a murder that occurred at the Frick years earlier. The Magnolia Palace starts slowly but then gains momentum as Davis weaves the Frick family members into the story and provides interesting details and stories about the odd family who created one of New York City’s finest museums.

Seasonal Work: Stories by Laura Lippman – In Seasonal Work, Laura Lippman has crafted a collection of outstanding short stories divided into four sections, with each portion containing three stories focusing on a central theme. Unlike most short-story collections that include at least one or two misses, this compilation contains 12 strong stories full of surprises, contemporary issues, and occasionally humor. Fans of the author’s Tess Monaghan series will be pleased to see Tess’s presence in a couple of the stories, including the titular and clever tale “Seasonal Work,” which kicks off the book. Another standout is “Snowflake Time,” which pokes harmless fun at Goodreads reviewers and its protagonist, a cranky news anchor turned cozy mystery writer. You do not want to miss out on this entertaining and imaginative collection of short stories.

You Got Anything Stronger? by Gabrielle Union –  In her second memoir, actress Gabrielle Union provides a deeply personal glimpse into her life and that of her family. She opens with her years-long and painful struggle with infertility and her feelings of failure that resulted. Eventually diagnosed with adenomyosis, she and husband Dwyane, after much deliberation, ultimately decide to use a surrogate, a process made more complicated by their prominence. As the book progresses, she discusses intimate and sometimes heartbreaking details of her life, including her sexual assault at age 19, navigating her role as a stepmom, the transition of daughter Zaya, and what community and its strength look like in Hollywood when women of color come together. These stories are balanced by some funny tales as well, including her bowel issues at a strip club and her failed audition for a Matrix sequel. Her ability to infuse her personality into every aspect of this memoir makes it a standout. I listened to this as an audiobook; Union narrates her story, and I highly recommend that format.