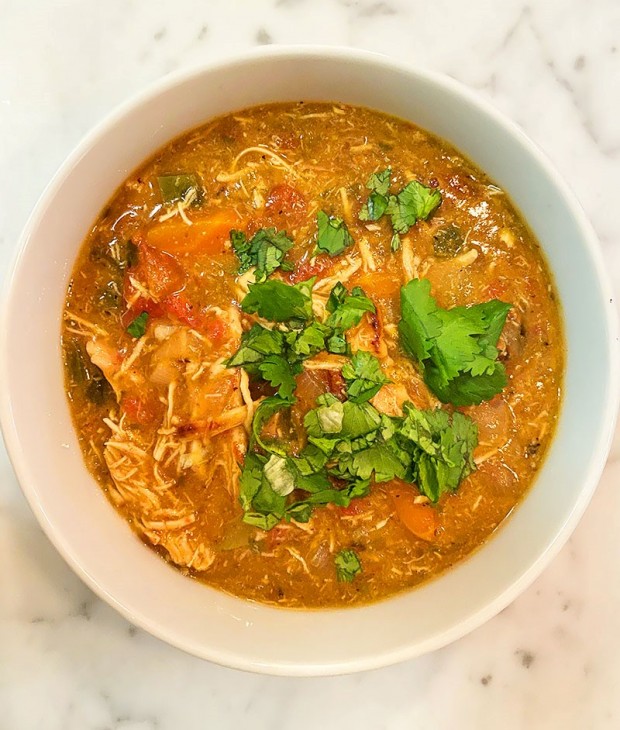 Julie Price’s Family Favorite Tortilla Soup is sure to become one of your family's favorites, too.

It’s the first full weekend of 2022, and it looks like things might get a little chilly. Perfect timing for some soup.

A few years ago, Julie Price shared her family’s favorite Tortilla Soup, a recipe she adapted from the old Rotisserie for Beef & Bird Restaurant. Julie is a great cook, and, not surprisingly, her recipe has now become one of my family’s favorites. Even the daughter who says she isn’t crazy about soup in general requests Julie’s Tortilla Soup.

We have adapted Julie’s original recipe a little bit. I like to cook the chicken with onion, peppers, and cilantro and then shred it, while Julie cuts her chicken in small cubes to be cooked in the soup. She uses celery in her soup, we have omitted it only because we aren’t fans. However you decide to make this recipe your own, you will be happy to have it in your repertoire!

Heat butter and oil in a large soup pot. Sauté the onions, jalapeño, garlic, and carrots for about 5 minutes, until the vegetables are soft. Stir in the cumin, chili powder, lemon pepper, salt, and hot sauce. Add the flour, and stir until no clumps of flour remain. Add the tomatoes and chicken, then stir in the chicken broth. Simmer for 1 hour. Using a hand-held blender, puree about ¼ of the soup (if you don’t have a hand-held blender, you can ladle ¼ of the soup into a blender, puree, and return to the pot). Ladle into bowls and top with crushed tortilla chips, cheddar cheese, and cilantro.

Place all the ingredients in a large, heavy pot and stir. Bring to a boil, partially cover, then simmer on low until the chicken begins to fall apart, about 1 ½ hours. Remove the chicken to a small bowl. Using two forks, shred the chicken. You can discard the broth and vegetables that remain, or you can strain the broth and use it as a soup base.