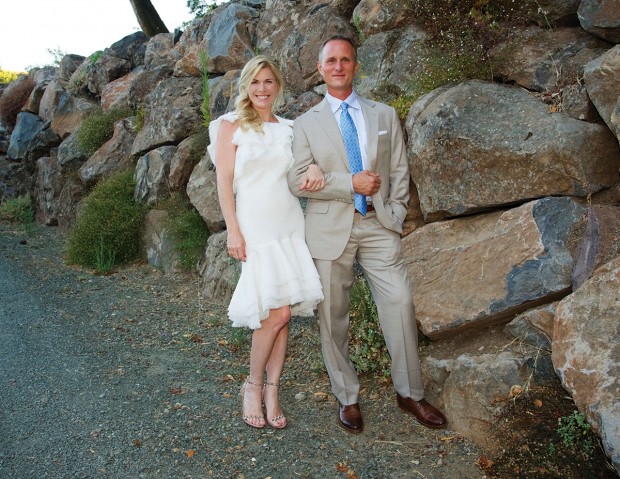 These Buzz-neighborhood sweethearts all said, “I do,” to each other. But not just once. To keep the love alive, they renewed their vows – some, multiple times.

On their 20th anniversary, Bradley Sinor told his wife, Sherry, he was taking her out for a special surprise. 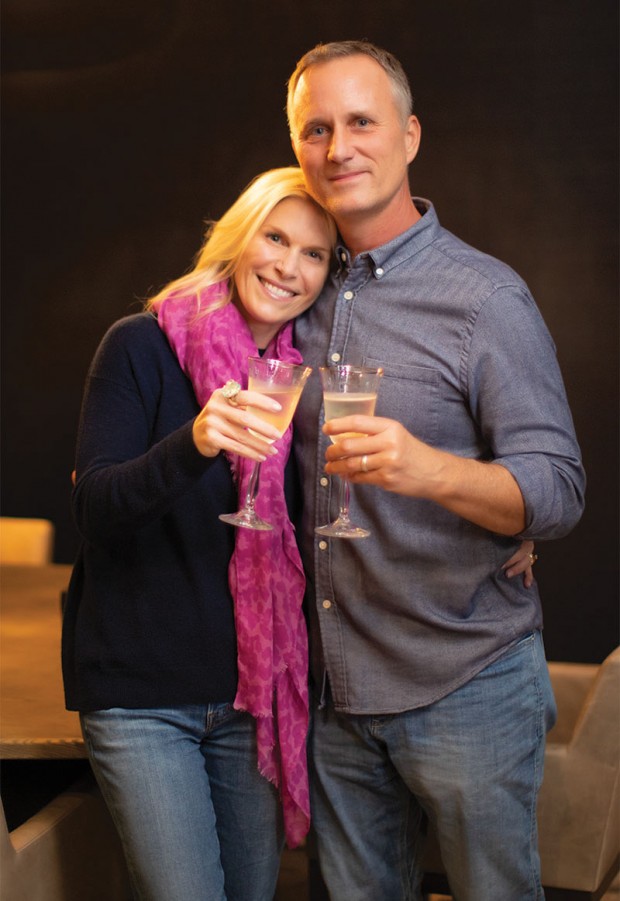 “We ended up at a department store, with a huge walk-in dressing area lined with white dresses and shoes,” Sherry said. “I was speechless. Bradley handed me a glass of bubbles and a card that asked if I would marry him again. I said, ‘Yes! Of course!’ Then he left. The sales lady appeared and said, ‘Let's find you a dress!’"

The surprises continued, with the couple flying to Napa and staying at a villa. The next day Sherry got ready upstairs with a hair and makeup glam squad. Bradley waited at the bottom of the steps. And unbeknown to Sherry, there was also a minister and photographer there.

“I think a vow renewal can be grand or small, but it's the message that matters,” Sherry said. “We are thrown curveballs throughout life. Renewing your vows brings it back to the beginning, to the two of you, and says, ‘I'd do this again with you.’” 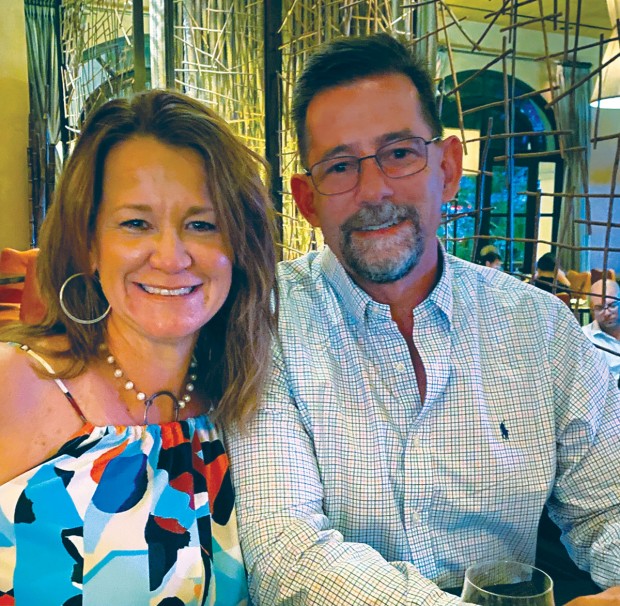 Whether with Elvis in Vegas or on dinner dates around Houston, Suzanne and John Shelby have kept smiling since 1994.

For their 10th anniversary in 2004, John and Suzanne Shelby “Viva, Viva, Las Vegas-ed” to renew their wedding vows with an Elvis-impersonator minister at the Little White Chapel on the strip. Joining in the ceremony were both sets of parents, Vic and Cherry Corman and Carolyn and Herman Shelby, who were both celebrating their 40th anniversaries,

“Elvis serenaded us with Love Me Tender and Blue Suede Shoes,” said Suzanne. “We had the giggles the whole time.” 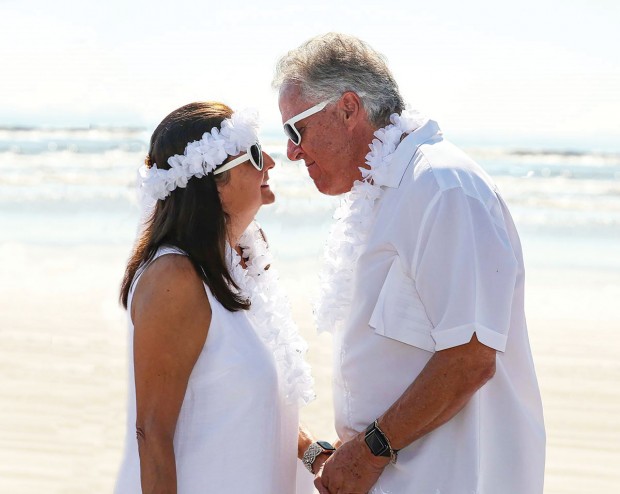 Melinda and Michael Wilhelm were a giggling bride and groom during their Surfside Beach group vow renewal with friends. (Photo: D. George Taylor)

Michael and Melinda Wilhelm love renewing their wedding vows. Unique ceremonies over the years have included a private vow exchange at the Waterwall by the Houston Galleria, a Hawaiian ceremony on Kalapaki Beach, and a group renewal on an Italian cruise.

“It was a beautiful ceremony with about 20 other couples,” Melinda said. “Everything was in Italian, but the priest spoke English and translated at the most important times.”

One of the lovebirds’ unique vow renewals happened in the fall of 2020. With sand between their toes and the Gulf of Mexico as their backdrop, Michael and Melinda and 19 other giddy couples renewed their vows on Surfside Beach.

“Everyone was excited to be outside after being cooped up with Covid since March,” Melinda said. “Before we knew it, our vow renewal turned into a White Party, with everyone wearing white. We invited all the couples to participate. I think over 20 couples ended up renewing their vows." 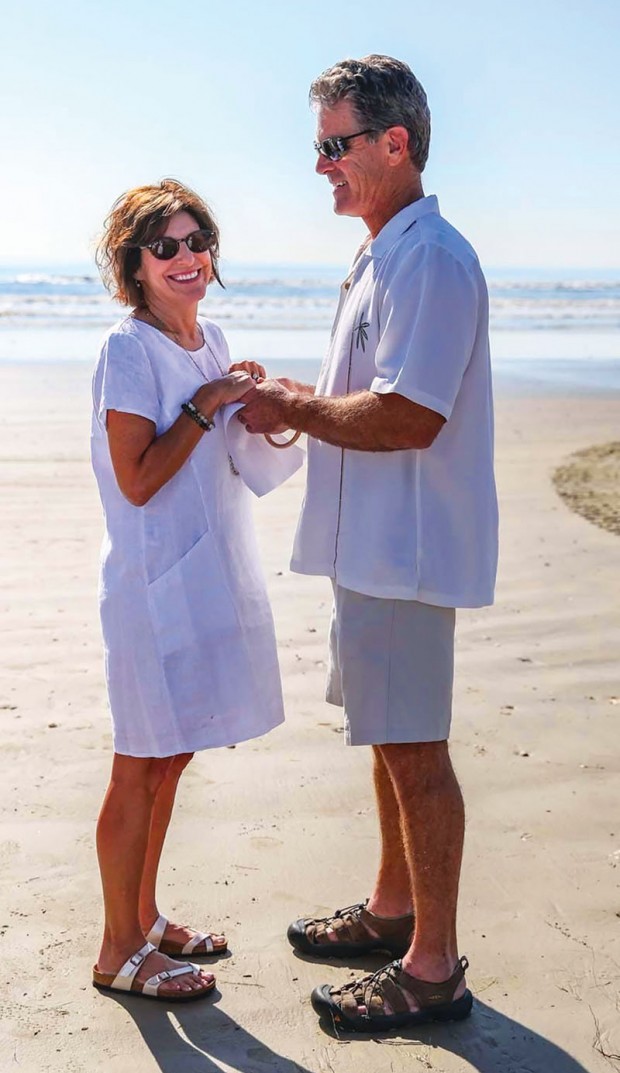 With 19 other couples, Alma and Tim Connor wore all white and joined in. (Photo: D. George Taylor)

Alma and Tim Connor were thrilled to be there. “The beachfront celebration was lovely, and the minister’s blessing made it extra special,” said Alma. “Whether you’ve been married a few years – or many years – renewing your vows is a reminder that, just like the ocean we stood in front of, our years together will ebb and flow like the tide and weather any storm that may come through.”

This past fall, Melinda and Michael renewed something else close to their hearts – their love for the Houston Astros. The couple attended all six World Series games in Houston and Atlanta. They were dressed so crazy and yelled so loudly that Fox Sports Net featured them numerous times on the national broadcast. Melinda was quite the star after Houston won Game 5 to stay in the series. 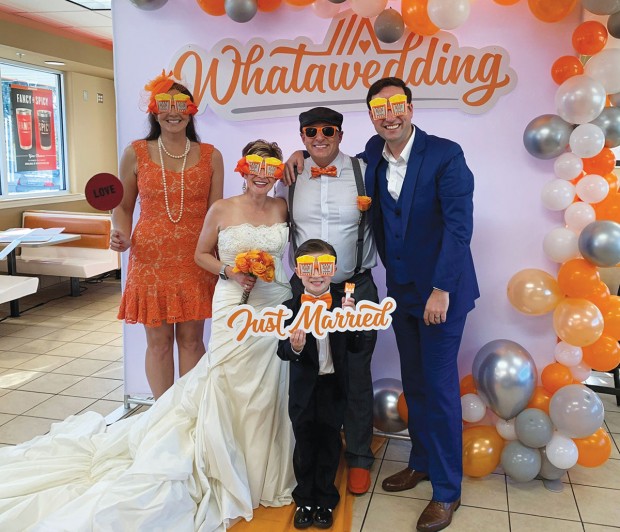 Polly and Lance Looper dressed up in their finest orange accessories (including french fry glasses) to renew their vows at Whataburger on Feb. 14, 2020. Their son, Trace, and their neighbors, Melissa and Andy Krenz, joined the fast-food fun, part of a Valentine's Day contest.

Polly and Lance Looper met on Match.com in 2005 and started dating long distance, as Polly lived near Green Bay, Wisconsin, and Lance was in Houston. They married in 2010, and Polly moved to Texas.

The Loopers hoped to do something fun for their 10-year anniversary, but they hadn’t made any plans. Polly entered a Whataburger Valentine’s Day vow-renewal contest. As hamburger fate would have it, her entry was randomly picked.

“Our family tends to do things big, and this was no different,” Polly shared. “It was fun finding orange accessories and having our son, Trace, with us. We had an absolute blast! Although [it was] a fun, cheeky way to renew, we were also renewed in our faith and our marriage. No doubt that has helped us endure and stay focused on what is important – our family.”