A winter escape to paradise 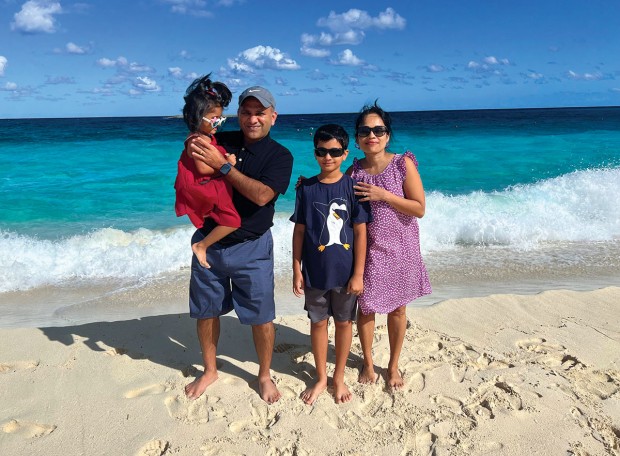 TOGETHERNESS The Sadare family takes a moment to strike a pose at Paradise Island Beach, Nassau, Bahamas. From left: little Myra in the arms of her father, Jay; Vivaan; and Supriya Sadare.

It had been a long year and a half for Supriya and Jay Sadare, as it was for so many. Supriya, a software engineer, and Jay, a global production line manager, had been working at home since the beginning of the pandemic. And while it was lovely to spend more time with the kids – 10-year-old Vivaan and 3-year-old Myra – it was tough to get the work done.

When they could, just to relieve the stress, they’d do a little Texas family getaway to somewhere drivable – San Antonio, Austin, Dallas, Rockport – but flying was out of the question. It was strange for them because international travel had been such a part of their lives – both were born and raised in India, and also Jay traveled a lot for his job until relatively recently. But like most people, they bunkered down and stayed in.

“The kids were really anxious; ‘Mommy, can we go to the beach?’” Supriya recalled. “We want to have some peace and relaxation, but we also wanted to have some adventures, so we were looking for a place with a mix of both.” 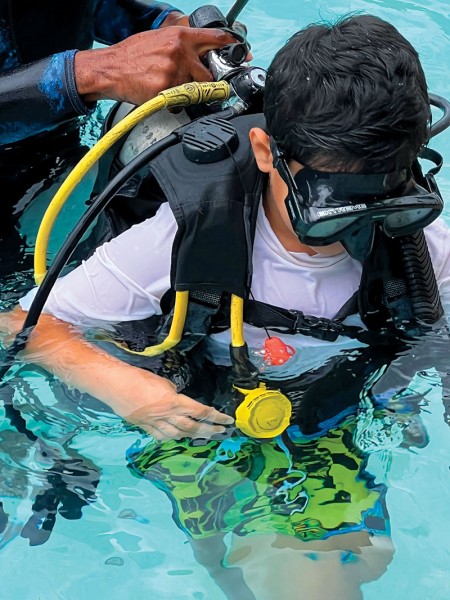 Vivaan in his scuba gear.

By the time winter break rolled around, they were more than ready to break out and see a different landscape. And it needed to have a beach.

They thought about Asia, Europe, and Mexico, but one destination stood out – for its proximity, convenience, comfort, and, most of all, safety protocols. That was the Bahamas.

“What we found out was that they opened the country in July 2021, but after a spike, they closed the country down again in September,” said Supriya. “They decided to do a better job, and when they opened back up, they did.”

The Bahamas’ efforts were rewarded when the CDC lowered its travel advisory from a Level 3 to a Level 2 before the holidays (and, as it turned out, back up again after – for the latest, see travel.state.gov). The virus was still making the rounds on the island, however, and travelers were urged to exercise caution.

The Sadares did so – to the extent of packing the extras that might be needed if one or more of them were to become infected, in which case they’d have to quarantine on the island. They bought travel insurance that would cover that and were careful to get open tickets in case their dates needed to change.

“We packed with the mindset that we might get stuck,” said Supriya. “We basically prepared for having Covid: We took medicines, extra masks, extra books; we both took our laptops so we could continue working, and watch the beautiful view from our room.” 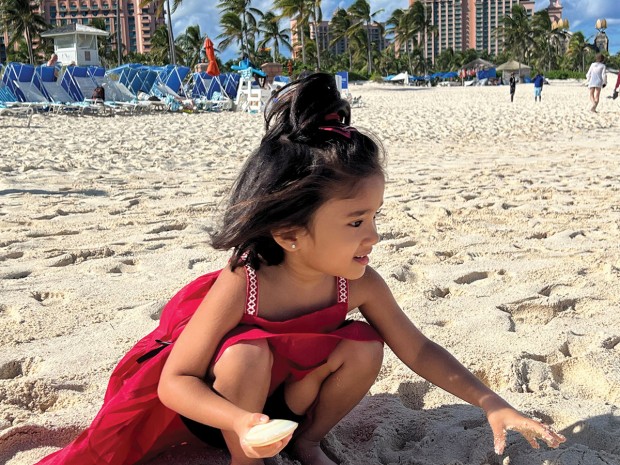 Myra, with a big seashell, searches for more on Cabbage Beach.

They ended up choosing the Atlantis Resort on Paradise Island in Nassau. Travel day dawned cold and cloudy, and they bundled up before heading for IAH, five suitcases and two kids in tow, for the three-hour flight to Nassau.

“The kids were super excited and happy. They couldn’t wait,” said Supriya. They arrived in the Bahamas around 1 p.m. and quickly ditched their jackets in the bright sunny climate.

They were surprised at the long lines to get through immigration, but they were greeted by local Bahamian musicians in straw hats and flowing traditional island clothing. Travelers would stop to dance with the musicians and have their pictures taken with them.

The time passed quickly, and soon they were on their way to their hotel with a chatty cab driver, who oriented them with an introduction to Bahamian politics, society, and culture and a peek at the prime minister’s office. The year 2020 was tough for local people, he told them, with 6,000 laid off during that time from their work in tourism. After a year of scraping by, people were happy that tourism was back.

With a full week ahead of them for adventures, they had plenty to choose from. Supriya and Vivaan, the family’s adrenaline junkies, headed off the first day on a jet ski while Jay stayed back at the pool with Myra. 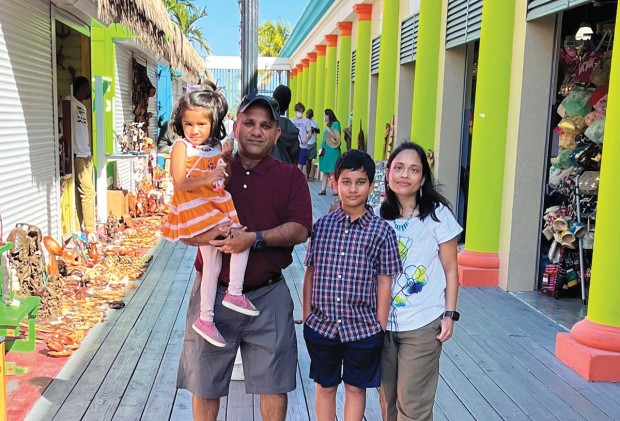 The family at the Straw Market in Nassau.

The pair booked their tour, got in line, and waited. Finally a friendly staff member gave them a nod. Supriya climbed aboard, with Vivaan behind her.

“Now, boss lady, you remember, this is just a motorbike of the sea. You turn with your handle and raise or let go of the gas, that’s all.” Supriya nodded and beamed – and they were on their way.

Supriya took her time getting the hang of navigating the waves. But Viv was urging her on from the back: “Mom, you can hit the gas a little more, you know.”

That was her cue, and soon they were flying over the waves far from shore. The exhilaration stays with Supriya still as she recalls the experience, and likewise, as she talks about the extreme water slides in the water park – the Jungle Slide, Serpent Slide, and the scariest one of all, The Abyss.

The next day she and Vivaan went for scuba lessons. Viv took to it like a fish to water, but Supriya ended up a bit overwhelmed by the complexity of it all and triggered by claustrophobia.

“I panicked a couple of times while replacing my regulator in the pool session, gulped in a huge mouthful of water, and shot straight to the surface, feeling like I could cough up a lung,” wrote Supriya in a detailed account of their trip. 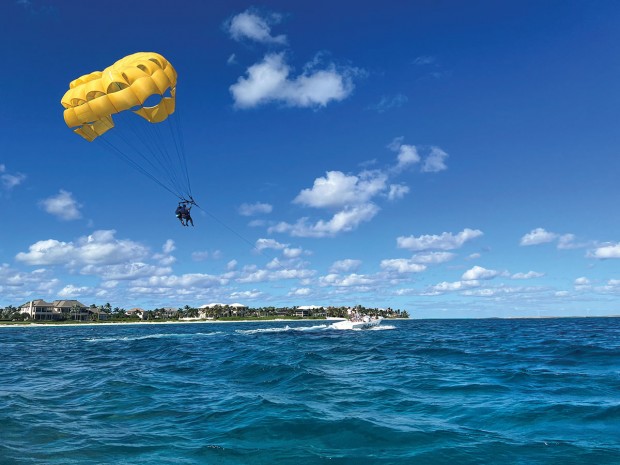 Given the time limitations, she ended up choosing a simpler option: She signed the two up for a Snuba tour – a hybrid between snorkeling and scuba diving in which the diver submerges up to 20 feet with a face mask connected by a hose to an air supply at the surface.

Breathing underwater below the crystalline waves while observing the marine life in their own natural habitat was thrilling.

The next day the water was rough, but the sky was calm and clear, so they tried their hand at parasailing – the closest either of them has ever been to flying.

“At about 600 feet in the air, it was 10 minutes of merely heaven,” wrote Supriya. “The beach, water, sky, people, landmarks, trees – words are not enough to describe the amazing view we saw at every angle.”

Meanwhile, Jay and Myra were having their own kind of fun. Unfortunately, the rough waters made it unsafe to take a little one aboard the boat, so they stayed back and enjoyed Nassau’s white sand beach and turquoise waters. Myra loved running along the beach, splashing in the shallow water, making sandcastles, and collecting shells.

“When a few brazen seagulls started getting too close, Myra waved at them, told them ‘Bye-bye, seagull,’” wrote Supriya. “When that did not work, it escalated: ‘Bad seagull, Go timeout.’”

Sea, sun, sky, and adventures in nature were the biggest focus of the trip. But the family also made time to soak up the local culture with a trip to Nassau’s downtown Straw Market, turning the chore of going into town for the required Covid tests into an unforgettable foray into Bahamian life.

The plaiting, braiding, and weaving of straw was once used for fish traps and utilitarian baskets throughout the islands. Since the 1940s with the arrival of the tourism industry, the craft has blossomed into an art form, woven into a wide variety of hats, bags, mats, and other accessories. Along with other traditional items such as dolls, conch shell jewelry, and wood carvings, the Straw Market provides a venue for local artisans.

It was tough to choose from so many beautiful options – especially since, as they learned too late, the market vendors did not accept credit cards, only cash. 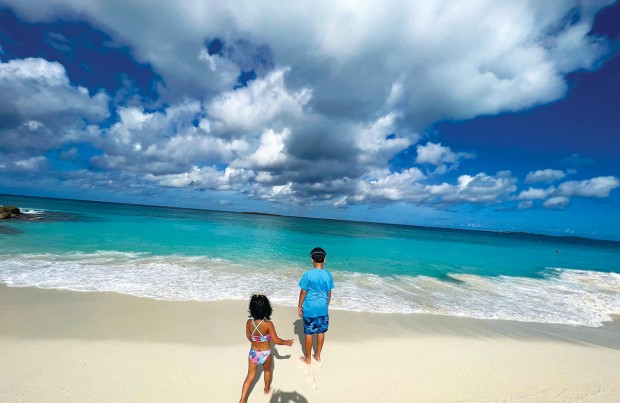 Myra and Vivaan watch the crystalline waves roll in at Nassau Beach.

In the end, Supriya bought a healing necklace handcrafted from Bahamian beach stones; Myra chose two brightly colored Bahamian dresses. Vivaan wanted a handcrafted lionfish and scorpion, with his name carved on the items. And together they chose a traditional wooden sculpture of a Bahama mama and papa, like the ones they had seen around the island. They dined at an authentic lunch spot called Fish Fry, where they were able to sample dishes prepared from the firm white flesh of the local shellfish known as conch (pronounced “conk”), the national food of the Bahamas. Surprisingly, the kids loved it, and conch fritters became a new favorite; conch with pineapple on pizza and the traditional “switcha” (Bahamian lemonade) were other culinary highlights.

All too soon it was time to make their way home – fortunately, without having to worry about Covid quarantine, as they had all tested negative. They heard about a family who had tested positive at the resort, though, so they left their extra bag of Texas comfort food with the concierge to gift to them.

The memories will stay with them always. So will the lessons learned. One was their enjoyment of the local people, with their gentle and gracious ways. Another was the chance to test their skills and learn new ones.

Supriya enjoyed watching the way Vivaan picked up on the historical and social context. He asked questions every chance he got, such as with the cab driver, who mentioned the relatively recent independence from the British in 1973. Vivaan made the connection with the 150 years of British rule in India and made some quick calculations. “So they were 350 years in the Bahamas and 150 years in India,” he mused.

“That’s a question he would have only asked if he was traveling,” noted Supriya. But beyond the facts, there was the lived experience of being there.

“Travel teaches a lot of things that school doesn’t teach,” Supriya reflected. “It’s not how you look or what you do, but who you are inside as a person.”

Travel restrictions are changing frequently because of the Covid pandemic. Check travel.state.gov for updates.

9:30 am to 3:00 pm
Location:
Cultural Center Our Texas
END_OF_DOCUMENT_TOKEN_TO_BE_REPLACED