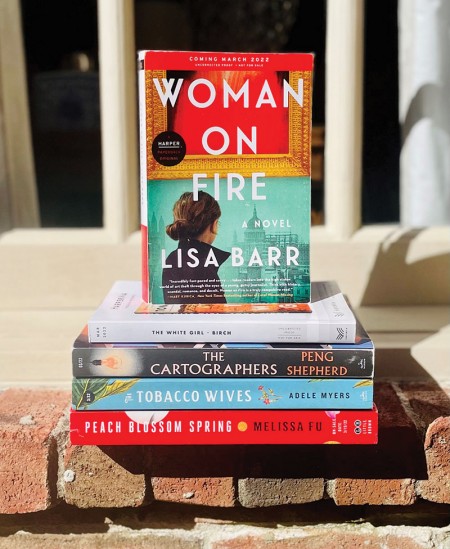 WHAT TO READ This month’s picks include a thriller set in the high stakes art world, a creative story about maps, and three historical-fiction titles, one set in Australia, one in China, and the other in North Carolina.

The Cartographers by Peng Shepherd – When Nell Young’s estranged father, a renowned cartographer, is found dead in the New York public library where he works, she discovers that he was clutching the same gas station map that caused their falling out years before. Curious about the importance of the map and its potential link to her father’s death, Nell conducts research and discovers that the map is exceedingly rare, and in fact, it is the only one left of its kind because an unknown collector has destroyed every one but the one her father owned. Baffled by this bizarre discovery, Nell sets out to uncover the secrets behind the map. This unique and creative tale is a page turner with an intelligent and engaging plot; I highly recommend it.

Peach Blossom Spring by Melissa Fu – This multi-generational tale begins in 1938 China when Meilin and her 4-year-old son Renshu must flee the rapidly approaching Japanese Imperial Army. The one solace amid the hardship is their beautifully illustrated scroll containing ancient fables; this manuscript provides them hope as they are forced to move from place to place across China, then to Taiwan, and eventually to the United States. Spanning decades and continents,  this gorgeous historical-fiction saga reveals that one’s past is never quite forgotten and that physically leaving a place does not erase the mental scars.

The Tobacco Wives by Adele Myers – Myers’ debut historical-fiction novel follows a young seamstress who unearths terrible secrets that a local tobacco company is hiding from its consumers and its employees. A recent arrival to 1946 Bright Leaf, North Carolina, Maddie Sykes is enthralled by the wives of the tobacco executives who run the town and lead seemingly perfect lives. But when Maddie uncovers some dark truths about the tobacco company’s products, she must decide if unveiling the harm being done by the company is worth upending the lives of the tobacco women and the rest of the townspeople who depend on the company for their livelihood. Myers’ detailed descriptions of working in a cigarette factory, combined with the hindsight of understanding the harm caused by tobacco and tobacco executives, make this a compelling and sometimes haunting read.

The White Girl by Tony Birch – The White Girl is set in the 1960s rural Australian town of Deane, a fictional representation of a typical small town in Australia. Odette Brown and her fair-skinned granddaughter Sissy live in the Aboriginal section of the town, Quarrytown, and are subject to the restrictions placed on them by the welfare authorities. When a new policeman arrives, Odette realizes that Sissy is in danger of being taken from her with absolutely no recourse on Odette’s part because during this time period Aboriginal people could not be Australian citizens or make basic decisions for themselves, such as when and where to travel or what job they will hold. While Birch does a thorough job explaining what it was like to live as an Aboriginal person then and the hardships they endured, he weaves these heartbreaking details into a beautiful tale of family and the lengths people will go to in order to protect each other. I loved Odette, and her strength and perseverance against all odds will stay with me for a long time.

Woman on Fire by Lisa Barr – After fledgling reporter Jules Roth talks her way into a job with Dan Mansfield, Chicago’s preeminent investigative reporter, he assigns her to a top-secret story, locating “Woman on Fire,” a valuable painting purloined by the Nazis during World War II. But Jules doesn’t have much time because the man Dan is helping find the painting is dying. In Europe, heiress and art collector Margaux de Laurent hunts for the same painting and will stop at nothing to find it. As Jules gets drawn into the dangerous and seductive art world of the uber-wealthy, she uncovers secrets and betrayals while becoming intrigued with the mesmerizing painting (and its subject) at the center of the drama. Using realistic twists and turns, combined with a stellar plot and an intriguing cast of characters, Barr has created a thriller that kept me on the edge of my seat.

10:00 am to 4:00 pm
Location:
The Heritage Society
END_OF_DOCUMENT_TOKEN_TO_BE_REPLACED