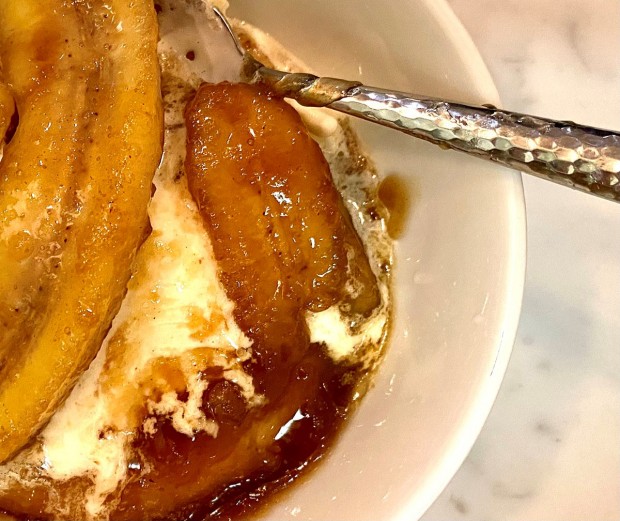 Emeril’s Bananas Foster is delicious and simple - butter, sugar, cinnamon, bananas, and a little alcohol that you burn off.

Fat Tuesday is coming right up (March 1), and we are going big this year! We have been partying in Galveston, celebrating with parades and balls, muffulettas and Zapp’s. And maybe too many vodka-sodas. We will worry about our detox next week after Fat Tuesday – stay tuned.

For now, we continue the Mardi Gras debauchery with Bananas Foster, the old-school, quintessential New Orleans dessert. Said to have been imagined at Brennan’s restaurant, Bananas Foster is traditionally a tableside presentation of bananas warmed in a flaming rum-caramel sauce. It looks like something you shouldn’t try at home. But hold on, because Bananas Foster is not only one of the yummiest desserts you can make at home, it’s also one of the easiest. Promise.

I’m using Emeril Lagasse’s recipe for Bananas Foster. He was just starting out with his eponymous Emeril’s restaurant in New Orleans when I was a college student there, back in the ’90s. We adored everything about that restaurant, and everything they served was the kind of food you keep eating even after you’re stuffed, because it’s that good. (We will talk about the Banana Cream Pie and Chocolate Peanut Butter Pie on another day.)

That said, Emeril’s Bananas Foster is as delicious as any. It’s also super simple. Butter, sugar, cinnamon, bananas, and a little alcohol that you burn off. Don’t let the flame intimidate you – it’s a quick and contained burn. Just in case, though, keep a lid handy to snuff out any runaway fire. Or, if you really want to stay on the tame side, just let the rum cook off with a little extra time bubbling in the skillet.

In your largest skillet, melt the butter over medium heat. Add the brown sugar and cinnamon and cook, stirring, until the sugar dissolves, about 2 minutes. Stir in the banana liqueur, then add the bananas, and cook on both sides until the bananas start to soften and brown, about 3 minutes. Carefully add the rum and shake the pan back and forth to warm the rum and flame the pan. (Or, off the heat, carefully ignite the pan with a match.) Shake the pan back and forth, basting the bananas, until the flame dies.