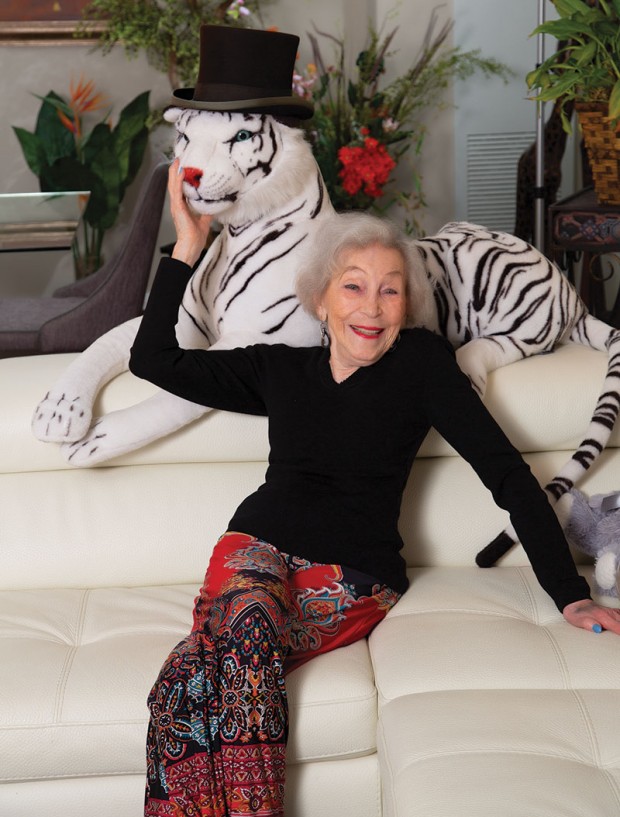 The first time I spoke to Naomi Friedman, I was calling her later than I had said I would.

“That’s okay,” she said. “That means you’ve been having a good day.”

Naomi Friedman turned 100 years old on Jan. 5. She knows a thing or two about how to make days good.

When we sat down for lunch in the dining room of Brookdale Galleria a few days later, Naomi said, “You want some champagne? What the hell, let’s get some champagne.”

“To great happiness and a great future,” Naomi toasted.

On a cold, gray, damp winter day, Naomi was radiant in a fuchsia pantsuit. Her newly manicured nails were periwinkle blue.

“It’s the Pantone color of the year,” explained Naomi. 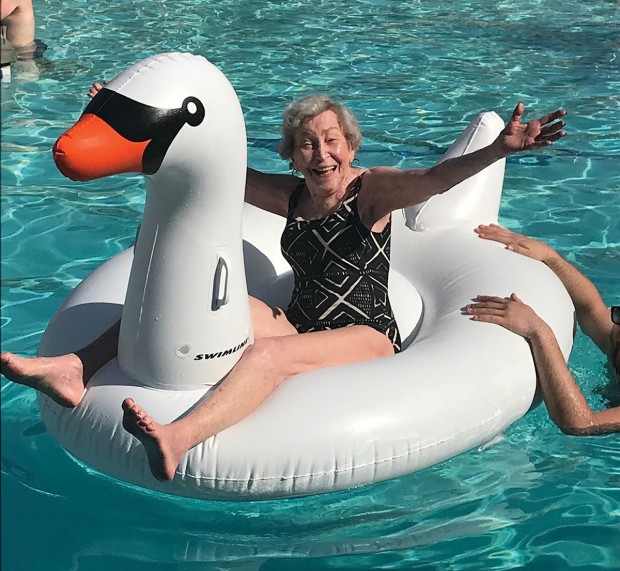 THE WATER’S FINE Naomi Friedman jumps in whenever she gets the chance.

Naomi is president of her senior community's resident council. “I am a very forceful president because I don’t believe in wasting my time,” she says. She is in the midst of a campaign to make sure her neighbors keep their emergency information on their refrigerators in their apartments. She recently put her foot down when the staff contemplated removing the dining room’s latte machine. “What are they going to do, throw me out?” she says. The machine stayed.

And she comes up with the most insider-foodie and trendy restaurants to go to on outings. Two of the latest were Himalaya (Anthony Bourdain featured it) and Better Luck Tomorrow in the Heights.

About five years ago, Naomi called one of her three grandchildren, Michael Koshkin, a filmmaker living in Brooklyn, and left a message saying she had an idea for a film, about her kazoo band.

“Basically, the first thing I said to her was, ‘You’re in a kazoo band?’” says Michael.

Or more officially, “a kazoo ensemble.”

Tracy Ahrens, director of resident programs and the manager/roadie for the ensemble, says the original idea was to form a choir, but when they decided they sounded horrible, they switched to kazoos.

“They rehearse every week; they laugh and giggle,” says Tracy. “They’re totally in on the joke. We are terrible.”

In the film, the ensemble members, wearing matching black t-shirts and zebra-patterned scarves, go to a nursery school to perform. One little boy picks his nose while he watches, rapt. A little girl mouths the head of her Barbie doll. Another boy starts crying at the start of a song, cracking the ensemble up.

“When we could go out to schools and parks, when they’d see the children, they’d light up and look 20 years younger,” says Tracy.

The short film, narrated by Naomi, is bittersweet.

In it, she says, “You know, I see these little people and think, goodness me, they’re going to be where I am someday, but they don’t know it yet. You just hope they have a safe journey.”

Naomi was born in 1922 in Jersey City, New Jersey. She graduated from high school at 16. “My father looked at me and said, ‘You don't know how to do anything, so you go to college.’” She smiles. “What a penalty.”

She went to Florida State University because her parents were “snowbirds,” spending their winters in Florida. “Can you believe, when I went to college, it cost $100 per semester for room, board, and tuition? I was one of the lucky few who got a fantastic education.” She majored in food nutrition with a minor in chemistry.

She started graduate school at Columbia University in New York but didn’t finish. “I didn’t have the money. I didn’t know you could borrow the money. When you are 20 years old – I was 19 at the time – what do you know?” she said.

Instead, she did a year-long internship at a hospital and become a dietician.

In the meantime, she met her first husband, Bernard Koshkin, who was in medical school. The young couple lived in New Orleans during his residency, then lived in Peru for two years while her husband worked as a doctor for British Petroleum. The government of Peru offered to build him a hospital in Lima if he stayed and practiced medicine, but the couple wanted their two young sons, Ben and Roger, to grow up in the United States, so her husband started a medical practice with a friend from medical school in Beaumont.

But her husband died suddenly, at age 58, of a heart attack.

And her youngest son, Roger, died at the age of 27.

Fifteen years after her husband’s death, she met her second husband, Jack Friedman, on a blind date. He was the CEO of a publicly traded company, Friedman Industries, that he had founded. “He was a real country boy, though, and would not live in the city,” says Naomi. “We lived in Longview, Texas.” Here, she mischievously puts her hand to her brow as if she’s trying to look off into the distance. “But it was a fairly good experience for about 18 or 19 years.”

He died, soon after they decided to retire to Houston where both had family and while she was undergoing treatment for cancer.

She has had cancer twice in her life.

After “Ode to Joy” was finished, Naomi went with grandson Michael to film festivals in Scotland, Oregon, and Marfa, Texas. A photo from one of these trips shows Naomi on a floatie in a swimming pool.

What is her secret? “I enjoy what is,” she says. Also, she says, “As I tell everyone, know yourself first and become your own best friend. Once you do that, you can conquer anything.”

Being honest with yourself, including about your mistakes, allows you to be honest with and relate to other people, she says. “The more you laugh about the mistakes that you made and the dumb things that you did, the better off you are,” she says.

Tracy calls Naomi her inspiration. “She gets up, puts her feet on the floor, and gets going. Though she’s faced a lot of challenges, she’s fearless. She’s willing to try new things, and though she’s very sophisticated and worldly, she’s not afraid to be silly.”

Multiple people told me I had to see Naomi’s apartment, calling it “fabulous” and “a treat.”

“There’s nothing fancy about it,” she protested, opening the door. “It’s just a lived-in, fun apartment.”

With a color scheme of white, black, and red, the apartment features a life-sized stuffed-animal white tiger, bought on a trip to Germany. The tiger wears Jack’s top hat. There’s a family of slender, six-foot-tall wooden giraffes and a rainforest grouping of orchids.

“If you see something that you love, and you can afford it, buy it right then,” advises Naomi.

When she was pregnant with her first son, she taught herself to sew. “Because we were so poor,” she explains. Boy, did she teach herself to sew. One day, Jack was in the Neiman Marcus men’s department when one of the salespeople told him his jacket was “magnificent” and asked where he could buy one. “I don’t think you can,” answered Jack. “My wife made it.”

A photograph of a 51-year-old Naomi hangs in her apartment. In it, she is wearing an off-the-shoulder black evening gown that, yes, she made. In her craft room, which she calls her “slop room,” though it is definitely not sloppy, she has a closet full of clothes – suits, dresses – that she’s made herself and drawers full of colorful sweaters she’s made with whimsical pictures knitted into them.

When friends celebrated Earth Day one year, they made a 10-foot-tall figure, calling her Trashy Trudie, out of recycled materials. Naomi made her a skirt out of newspaper, pleated, like something you’d see at the Met Ball, Tracy says.

When I am amazed at how she taught herself to sew so beautifully, Naomi says, “Nothing is complicated when you know how to do it. When you can do something, it’s easy.”