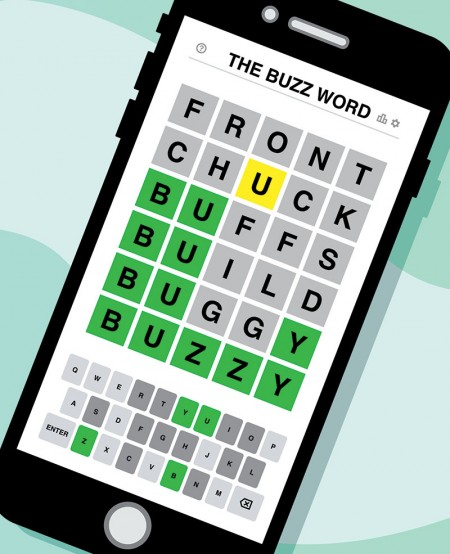 ARE YOU PLAYING?  Wordle’s word game of the day is all the buzz. (Illustration: behance.net/runamokstudios)

Are you playing Wordle yet? Either way, it’s likely you’ve heard of it. “I’m obsessed!” is the answer we received over and over when polling Buzz readers about the new game.

Part of the allure is Wordle’s simplicity: no ads, nothing to buy, nothing gathering data on you. That’s because Wordle started as a game Brooklyn software developer Josh Wardle (hence the name Wordle) created for his wife, who loves word games. First, he and his wife played. Then they shared it with family. Then, after it was released to the world in October, users of the game soared from 90 in November to 300,000 in January. According to The Conversation, players totaled 3 million as of mid-February.

Elizabeth Elliot, a mother of three who works at Pepper Lou Gifts in Memorial, plays with a strategy. “I pick a first word that has a lot of vowels,” she says. “Adieu, abide, piano, orate. The word I got on a whim [meaning she won on the first try] was ‘moist.’ You’ve got a couple of vowels there, and some frequently used consonants.”

Elizabeth began playing Wordle when she saw friends on Facebook posting screenshot shares of their scores. “It looked mysterious with those green and black blocks,” she says. “I spent about a day and a half looking for the app!”

But, Elizabeth points out, Wordle is not an app. To get it, go to www.nytimes.com/games/wordle and follow the easy instructions.

Charles Fletcher, director of client services at Danziger & De Llano, LLP, not only plays with a strategy, but he is one of the hardcore fans, staying up until midnight to play. “Midnight is when the new game comes out. Since it’s the same word for every player in the world, waiting until later means I could see a spoiler in social media somewhere,” he says. “I always start with the same word, later, and sometimes the same second word, odium or opium. Many times, I’ll put in my first and second word, and if it isn’t obvious after that, I go to sleep thinking about it and finish the game in the morning.”

Charles texts his dad in College Station and brother in San Antonio with scores. “We rarely get to see each other, so Wordle has been nice since we have been in communication daily since it started.”

Consultant Anne Tulek had played about 10 times when she told us, “I saw everybody playing, and I said, ‘I’m not doing that, I’m gonna get addicted.’ But then I saw one more post about it and said, ‘Okay, I’ll try.’ It’s so clever, and so constrained. You get six tries, and you get it or you don’t. You can only do it once a day, so you can’t go down the rabbit hole!”

Even still, people are self-proclaiming to be obsessed. Elyse Kalmans says she recently started playing and had a realization: “I sometimes am thinking of five-letter words to guess as I’m falling asleep!” Maybe she and Charles need to team up.

Barbara Catechis says Wordle has brought family in Houston, Round Rock, Denver, and Fayetteville, Ark., together. “I started playing with my sisters, sharing our scores and commenting on the ease or difficulties,” she says. “Weeks later, one of the with-it, internet-savvy nieces popped into a family group text to ask if her mother and aunts had heard of this thing called Wordle? Now we have a bigger family Wordle text group. We celebrate the [second-guess wins] and commiserate the all-too-often [six-guess wins]. It’s been a joy to play and a great touchstone for all of us.”

The New York Times bought Wordle in January for an amount in “the low seven figures.” Players were worried the purchase would preclude free play, but the Times promises to continue offering it at no cost, at least for now. Wardle, the creator, also stated he is working with the Times to ensure that players’ scores and streaks will remain.