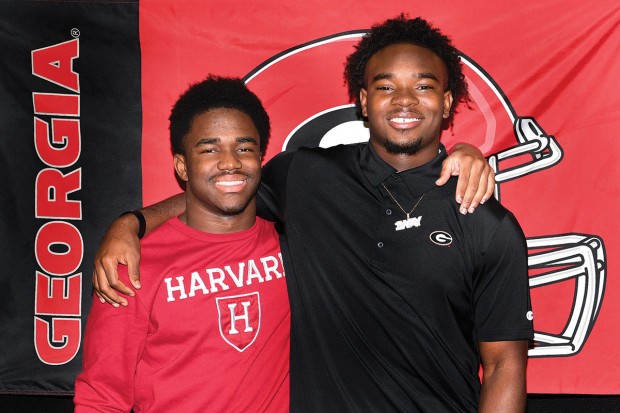 It was a dynamic duo of signees on National Signing Day for the Kinkaid Falcons football team, with Cameron Henry committing to Harvard University and Dillon Bell signing on with the University of Georgia.

“Sending one player to the defending national champion Georgia Bulldogs and another to the nation’s most prestigious academic institution is pretty exciting and a great measuring stick for our football team,” said Kinkaid head football coach Nathan Larned. “One of the knocks you’ll sometimes hear is that we can’t get kids to premier programs, but Dillon and Cameron are prime examples of why that just isn’t so.”

As the No. 1-ranked private school player in Texas, Bell has been the recipient of numerous honors during his career, including the Greater Houston Private School Offensive Player of the Year award. “Dillon had to work his tail off to get through a rigorous academic program like Kinkaid. He deserves every great thing that comes his way. Also, right after Georgia won the national championship last month, Bulldogs head coach Kirby Smart paid a visit to Dillon here on campus, so that was pretty exciting for everyone.”

As for Henry, the Harvard signee was an all-state kick returner this past season and the recipient of the Greater Houston Iron Man of the Year award for excelling at multiple positions on the football field. “Cameron is a hard-working and intelligent young man,” said Larned. “We’ve had a few other guys play football at Ivy League schools such as Dartmouth, Columbia, Cornell, and Penn, but I believe he’s our first Harvard kid. Cameron’s also really humble, which says a lot about his character.” 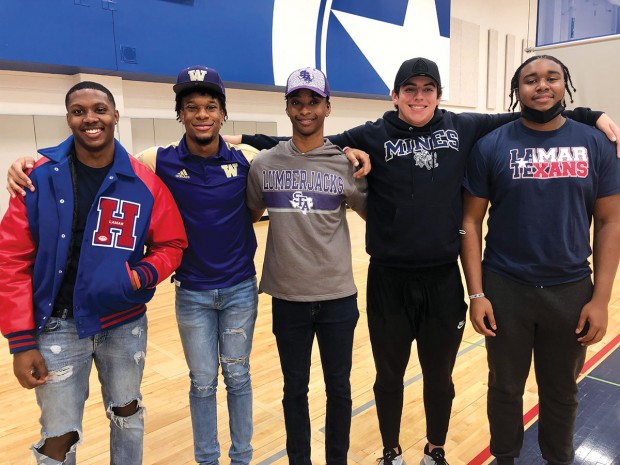 “It was a really good day for us, and we expect to have even more guys sign to play college football in the coming months,” said Lamar head football coach Mike Lindsey. “All five of the guys played and excelled at multiple sports here at Lamar, and it’s really exciting to see their hard work and dedication pay off. Also, with current college players receiving an extra year of eligibility due to Covid, the opportunities for scholarships are tougher these days, so it’s really nice to see our guys move on to the next level. I think they all have a bright future ahead of them.”

Impressively, with three of the five signees being defensive backs, Lamar will have nine defensive back players at the collegiate level next fall, including players suiting up at The University of Texas, University of Houston, Prairie View A&M, and McNeese State. “That’s pretty cool to have that kind of representation,” said Lindsey. 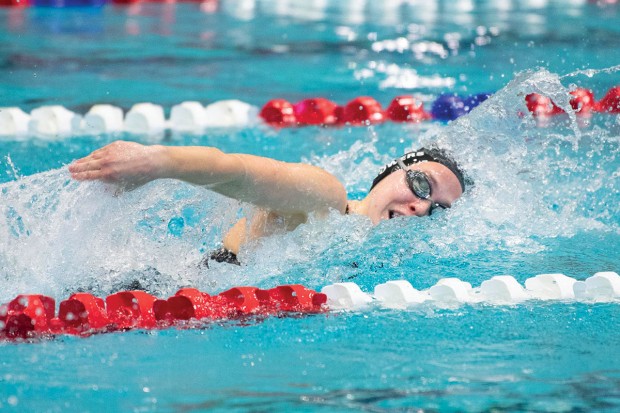 FLOWER POWER It was a sensational performance for St. John’s senior Ella Flowers at the SPC South Zone Swimming and Diving Meet. Flowers finished first in a pair of individual races along with another two first-place finishes in the relays as St. John’s won the meet by a dominating 45-point margin. (Photo: Kevin Long-Gulf Coast Shots)

It was a dominant showing for St. John’s School at the SPC South Zone Swimming and Diving meet, with first-place championships for both the boys and girls swim teams. The St. John’s girls won the meet by 45 points over second-place John Cooper, while the boys finished first over second-place Kinkaid by a lofty 67-point margin. “I was extremely proud of the way our entire team competed,” said Mavericks swim coach Ron Raper. “They were just fantastic.”

The Mavericks were fantastic in virtually every event, including a sensational meet from senior Ella Flowers. Flowers finished first in both the 200-yard freestyle and 100-yard breaststroke while also teaming up with Lexi Lukens, Lillian Poag, and Katie Czelusta for a pair of victories in the relay events. “Ella is one of the best swimmers in the state,” said Raper.

On the boys’ side, Mavericks senior Todd Achuff and sophomore Alex Miao led the way as high scorers with victories in multiple events. Miao set meet records in the 200-yard medley (butterfly) and the 200-yard freestyle, and while teaming up with Achuff, Warren Kozak, and Nick Hensel, for victory in the 400-yard freestyle relay.

The boys also finished first in the 200-yard freestyle relay behind the foursome of Kozak, Ryan Guthrie, Jeremiah Broughton, and Michael Skaribas. In addition, Achuff, Guthrie, Miao, and Hensel raced to victory in the 200-yard medley relay.