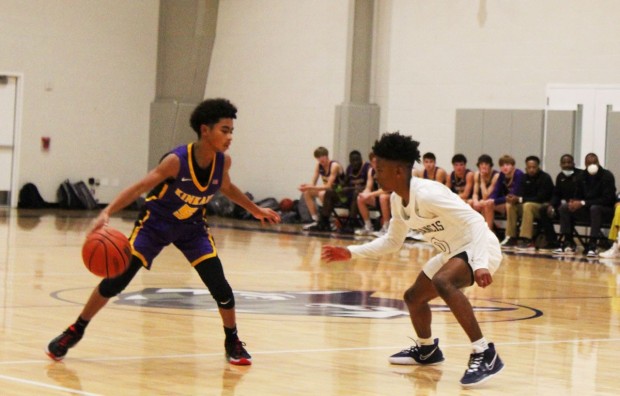 Even though the basketball season is drawing to a close, we remember our players’ brightest moments. When thinking of talented players, freshman Corey DeWayne Syon II is one that comes to mind.

Syon has been playing basketball since he was seven years old. He quickly fell in love with the competitiveness and adrenaline rush while running down the court. Despite only being 5’7, Syon proves that height isn’t the only factor of being a good player.

At St. Francis, he hopes to find a good path to his future along with getting a good education. This winter, he played point guard on the varsity Wolves basketball team. While Syon might not be able to dunk or touch the net like other players, he makes a ton of lay-ups and can shoot from almost anywhere on the court. Making shots is one of his favorite things about playing, and it’s his strong suit. He has saved many games by shooting winning shots and free throws.

To call him a strong player would be an understatement; he’s a star on the court. At the end of the St. Francis basketball season, he earned the title Offensive MVP with fellow player John Laboy. Outside of school, he plays for a league in the Amateur Athletes Union (AAU) called JL3 Elite. He’s been playing for them for seven years now.

Syon hopes to gain offers and become one of the best players in the school. He is inspired by his dad, and pro players Chris Paul and Steph Curry. He hopes to be in the NBA someday. When asking what keeps Syon motivated, he said his parents.

“[There] was a time that I hated the way I played, and my height,” says Syon, “[but] my mom played a really big role in getting myself out of it.” His dad, also Corey Syon, works in the medical field now, but used to be an all-American. Now he helps Syon develop his basketball career.

Syon is one of many basketball players to join St. Francis this year, but nonetheless he makes sure we don’t overlook him. He makes his presence known no matter how big or small the opponent he is facing may be. Syon’s determination and dedication to his sport makes him very admirable amongst his peers. His refusal to go unnoticed is similar to St. Francis’ development into a high school. It’s students like Syon that the St. Francis’ community needs more of. As Syon continues to grow, we will see what inspiration he brings to those around him.