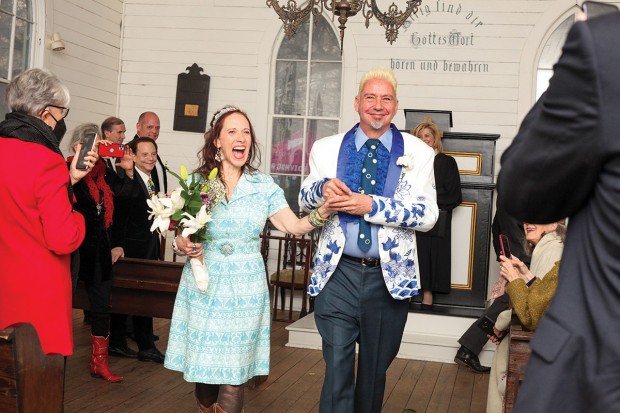 All about timing. After a chance meeting in 2007, Catherine Anspon met John Walker again when art patron Peter Glynn invited her to a salon at his bungalow. She and John, both Rice alums, clicked and started a commuter relationship for two and a half years. He proposed on New Year’s Day – her birthday – in the historic Peery Hotel in Salt Lake City with a beautiful antique ring. Justice Poissant performed the “vintage” ceremony Jan. 28, 2022 in the 1891-built St. John Church in Sam Houston Park. Dinner was intimate at the historic 1840s La Carafe but the merriment with champagne, cake, and dancing was at the 1893-built art bar, NotsuoH. Their time-travel bubble took many detours through the decades, as they discovered their commonality at Commerce Street Artists Warehouse in the ’90s, and as Public News writers. But as Pope John Paul II says, The future starts today, not tomorrow.

Sunsets and rainbows. In January, Sam Strain and his fiancée Nicole Acevedo basked in the sun in Honolulu for a few days before meeting Sam’s mom Kitty and sister Sarah Strain for five fun-filled days in Maui. Golf at Kapalua, dinner at Mama’s Fish House, whale-watching, parasailing, cliff-diving, and watching colorful sunsets consumed them. Being on island time and watching the skyscape with rainbows was a much-needed respite. Surf’s up, hang ten, do it again. 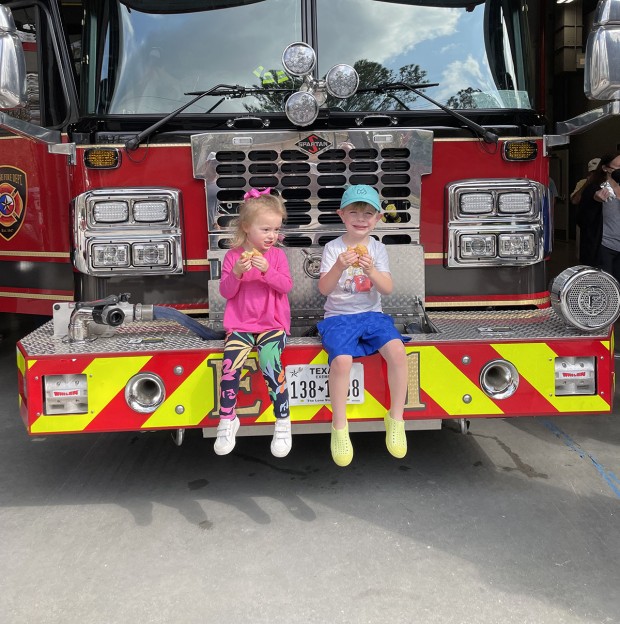 No fire, just food. Neighbors Farron and Eric Silverman with children Harper and Hudson Silverman and Hope and Will Erwin with children Wyatt, Walker, and West Erwin took advantage of the Villages Fire Department Open House March 5 to meet the firemen and see a fleet of emergency vehicles. They were most impressed with the commercial stove and three refrigerators. After a treat of donuts, they walked across the street to play at Hedwig Park. A fantasy life.

Virtual dinner. Once again to reflect Covid times, the Memorial Drive Garden Club waived the in-person friendship party to create a memorable four-course dinner with wine pairings via Zoom. It was led by Sean Beck of Backstreet Café after members picked up their dining and beverage package. They chitchatted as Sean drew them in the conversation about the meal preparation. Connoisseurs and wine experts Daniel Warrilow, Albert Kamkhagi, and Rodney Willis shared tips. Some “cellar” diners included Susan and Joe Braden, Mary Grace Landrum, Victor Yang and Rachel Messina, Geetha and George Mammen, Barbara and Jay Files, Cal and Connie Dalton, Sharon Roark and Barbara Upchurch. Everyone agreed it was delicious and fun-tastic.

Two parties in one. The Racket Club Dinner Dance Club members were entertained as they danced to The Grooves Dance Band Feb. 27 at the Briar Club. Barbara and Jay Files also celebrated Jay’s milestone birthday with son Jason Files and daughter Jessica Liff, who flew in from Nashville. Seen jazzing up the line dances were Beverly Mattern and son David Mattern, Landa and Roger Roitsch, Sandra and Randy Bryant, and Roz and Byron Cooley. Everyone was a dancing star to the popular tunes.

Chocolate-covered popcorn. The party was brought to the guests by the Letter J and the Number 2 to celebrate Julian Zarghouni’s second birthday in his driveway and lawn, and hosted by parents Morgan and Mehrzad Zarghouni. Elmo danced a Happy Dance to the DJ’s tunes with the 24 young ones in between photo ops. Between snacking on the pizza fresh from the portable pizza oven, fried shrimp, mac and cheese snacks, and the elaborate candy and cookie bar, the children were in the super-sized bouncy house. Off to the side, adult-only beverages created another bounce for the 33 of age. Party guests of all ages went for the multi-flavored Sesame Street-themed cake with multiple flavors of ice cream. 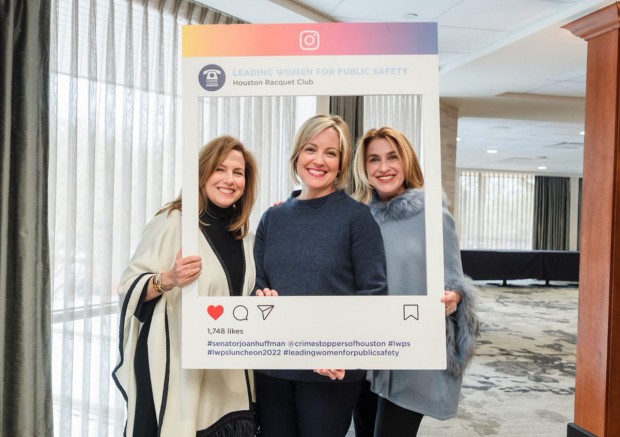 Supporting Crime Stoppers. The Leading Women for Public Safety Luncheon at the Houston Racquet Club honored Sen. Joan Huffman for her fight to get paroled felons off the streets. Luncheon co-chairs Lindsay Aronstein, Michelle Heinz, and Cara Vann welcomed guests. CEO Rania Mankarious introduced Sen. Huffman, a tireless advocate for children’s safety and an advocate in the fight against sex trafficking. Theresa Seck and Paul Castro gave their stories about their brother and son, respectively, being shot while defendants were on parole. One was out on seven felony bonds in two counties. Some in the crowd were Jill Talisman, Sheridan Williams, Anne Muntz, and Vicki Friedman. In 2021, Crime Stoppers’ Tip Line received 8,950 tips and assisted in solving 380 cases including 23 murders. 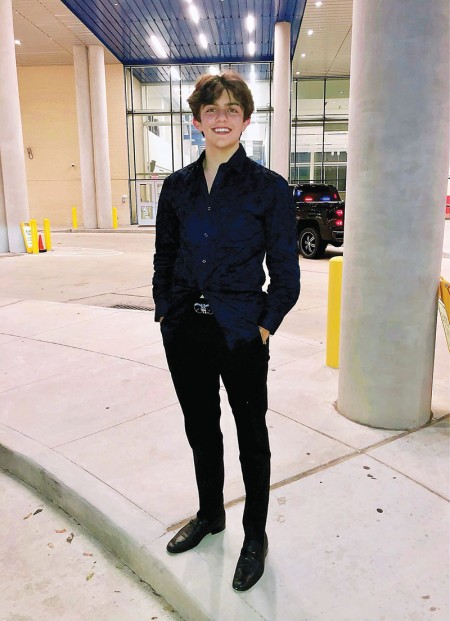 SUPPORT FOR UKRAINE Aiden Ortiz, a student at Lamar High School, is helping to change the world with his plea to raise funds for Ukraine.

Love for Ukraine. Ella Markovsky and her husband Rich Ortiz had just returned from a trip to Dubai and the Maldives when they found out the Russia/Ukraine war had begun. Ella’s brother, Vladimir Nepochatov, was in Kiev and had been planning an escape. Vladimir, director of the technical assistance program at Soldiers of Peace International Association, asks for urgently needed surveillance equipment and bulletproof vests and helmets for the Ukrainian Armed Forces. Ella and Rich’s son Aiden Ortiz, 17, created a fundraiser through his Twitch stream to help raise funds. Since the conflict is impacting banks in Ukraine, funds are being sent through the Estonian-based NGO Organization for Development, Security and Sustainment led by Jaan Hein, former Estonian ambassador to Ukraine. Email [email protected] for more information.

A blow-out for sure! Over 100 guests arrived in batik, bell bottoms, and floppy hats to join Tommy Harrington and Keith Macaluso’s ’70s and ’80s party. Their dual February birthdays were celebrated at Neon Boots Dancehall and Saloon with jambalaya and Cajun fare. DJ Easton jived with dance hits of the eras until a transformer blew. Never fear, however – DJ Easton pulled his SUV around and hooked up his soundboard and continued with the music. A Mardi Gras Ball is in the works for next year so get on the party list!

10:00 am to 4:00 pm
Location:
The Heritage Society
END_OF_DOCUMENT_TOKEN_TO_BE_REPLACED