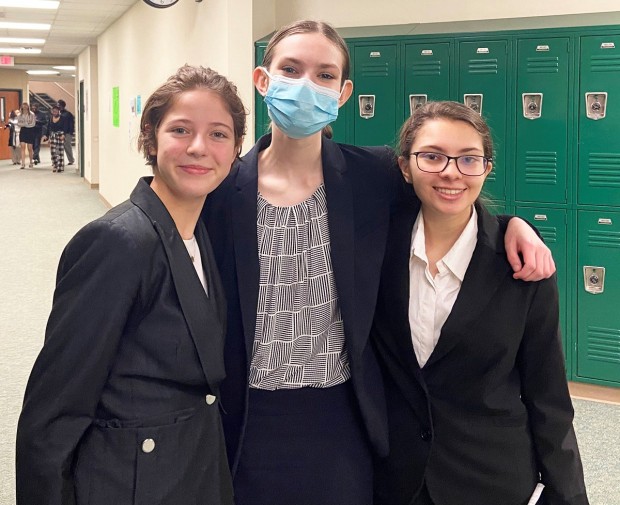 From left: Mackenzie Young (‘24), Alexis Voisin (‘24), and Gabriela Clinton (‘22) pose together after the last preliminary round.

From Thursday, Feb. 24-Sat., Feb. 26, members of the St. Agnes Speech and Debate team competed in the South Texas Districts Qualifying Tournament. Approximately 16 students participated in various events like Lincoln Douglas Debate, Public Forum Debate, Informative Speaking, Dramatic Interpretation, and Duo Interpretation. Qualifying for the tournament was a feat of accomplishment in and of itself. Furthermore, it determined who will compete in the National Speech and Debate Association’s Nationals Tournament in June. Over 18 schools participated in the tournament. It was a wonderful experience after more than a year of online tournaments.

Catalina Martinez (’23) speaks about online tournaments: “COVID definitely changed the experience for me because I felt disconnected from my competitors and judges. In my event [Dramatic Interpretation] it’s really about conveying emotion, so performing through videos last year with a piece that required a lot of eye contact was a little difficult.”

Being at a tournament as large as the South Texas Districts was a bit overwhelming considering the hard work all the competitors have put in to qualify. Catalina continues, “It’s definitely nerve wrecking leading up to districts but once you get there the atmosphere is sort of comforting. You’re all competing against each other but at the same time you’re all going through the same emotions and have all gone through the same process to get to where you are. It’s also comforting to see people [practicing their speeches by] talking to walls because then you don’t feel so awkward. Once I saw other competitors perform it made me remember why I joined the team in the first place.”

As a new competitor to in-person tournaments, sophomore Alexis Voisin (’24), discusses some of the troubles and mishaps. “Overall, district was [a bit of a] mess in terms of judges being there on time and releasing ballots; […] It was quite aggravating to have to wait until March 1st to know how I did in a tournament that was last week.” However, despite the setbacks, Alexis says, “The competitors were people I’ve been competing with for this whole season, so it was great to see them again. Most of the competitors were nice and very friendly to talk to, and it’s nice to get to see their pieces again. Going to [in-person] tournaments and getting to talk and play games while waiting for our next rounds is a great bonding experience, and I'm so excited to do it next year!”

Gabriela Clinton (’22) shares a similar outlook. She says, “Last year was my most successful year in Speech and Debate because of how easy it was to compete. Instead of driving an hour to a remote, massive high school and spending the whole day there, I could just record my 10-minute piece, submit it, and wait for results. But I did miss out on the unique experience of being at a tournament with the team and getting to watch the other competitors do their performances.”

I wholeheartedly agree that online tournaments are just not the same as in-person tournaments, where everyone is in it together and supporting each other. I met some of my fellow competitors in Program Oral Interpretation and made some new friends. After three days of competing, I placed third in my event, qualifying for Nationals in the summer! Along with me was Ella Huang (’24) who qualified as an alternate for Lincoln Douglas Debate.

Overall, the entire team did amazingly well, and I feel much closer to every member who attended. Catalina says, “The experience of going to tournaments together definitely strengthens your bond with your team because you’re all going through the highs and lows of a tournament together so you get to create memories that you can share with those people.” As a senior, Gabriela claims, “I felt separated from the team after Covid made everything virtual, which made me realize how important it is to spend time with the group. I think a lot of new members don’t realize how much they could benefit from practicing together rather than doing everything by themselves at home like during the pandemic, and I hope that as we’re adjusting to in-person tournaments again, Speech and Debate will soon go back to having that comradery both at school and between rounds.”

I think everyone is ready for a full in-person season next year, which hopefully we will get to experience. The St. Agnes Speech and Debate Team did a wonderful job at the Districts tournament, and we hope to return stronger than ever next year. As Alexis says, “Speech is where I've met some of my greatest friends and getting to see them all at Districts was a great experience overall!”