When up close hurts too much 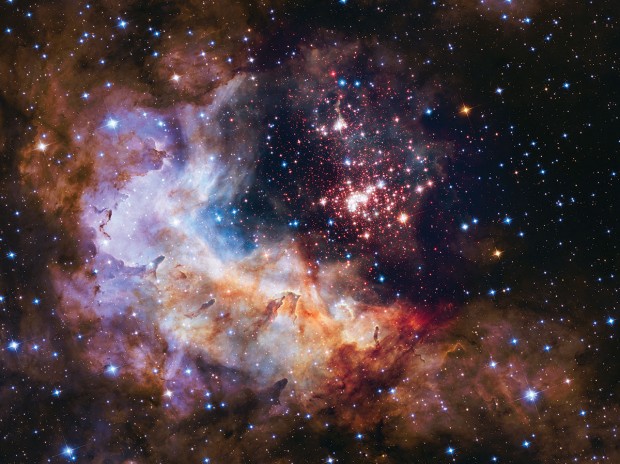 PERSPECTIVES Thoughts on springtime and war from deep inside the universe. (Photo: NASA, ESA, the Hubble Heritage Team (STScI/AURA), A. Nota (ESA/STScI), and the Westerlund 2 Science Team)

It’s April, the most celebrated month of spring. I see the determination of my fig ivy as it makes its glorious ascent and recaptures its place on my garden wall. It missed a spring, thanks to Snowmageddon. So did I, it feels. I want to take in the wildflowers and tiptoe through the tulips. But then I remember, the world has been dealt another sucker punch. It’s not spring for everyone.

While scanning the news, I heard a quote paraphrased here. “Some decades nothing happens, then some weeks, decades happen.” Strangely, the person who said it was Vladimir Lenin around 1917 just before his revolutionary rise to power, imposing a one-party socialist state governed by the Soviet Communist Party.

This made me think of Krista Tippett, a Peabody, Webby, and National Humanities Medal winning podcaster and journalist. Tippett witnessed years in the ’80s leading up to the fall of the Berlin Wall, first as a stringer for the New York Times then as Special Assistant to the U.S. ambassador, a nuclear arms negotiator. She recounted her experience in a 2019 article shared on her website titled What the Berlin Wall and ‘The Handmaid’s Tale’ Taught Me About Time.

“In those years, no one west or east could imagine that the Berlin Wall could disappear in our lifetime,” Tippett writes. But then, on Tippett’s 29th birthday, November 9, 1989, the checkpoints opened between East and West to the biggest street party in history.

“…there is in any moment more to reality than we can see and more change possible than we can begin to imagine,” Tippett said of those times. Despite President Ronald Reagan’s famous challenge in 1987, “Mr. Gorbachev, tear down this wall!” Gorbachev’s changes seemed small and superficial at first, Tippett observed.

The port-wine birthmark on his forehead, typically airbrushed out in photographs, was no longer hidden. He was human.

I remember, too, his first visit to East Berlin, where he did the extraordinary thing of bringing his lovely wife Raisa on his obligatory tour of factories, the supposed heart of the Workers’ State. Rather than give stuffy speeches and remain removed, they walked around and spoke with people. They shook hands. They asked questions and listened and smiled. The effect of this on the watching society was seismic. People cried, overcome. His humanity was unlocking theirs. It had nothing to do with politics and everything to do with politics.

Gorbachev had no intention of tearing down the wall. But before it started, some invisible power shift had occurred.

The borders in other East European countries began to loosen, and East Germans began to flock to these places with a desperate hope that they would find a way out there. Western embassies became places of refuge…overfull. There were people scaling fences to get in. People died. Still no one imagined that the Wall could come down….Gorbachev, for all his smiles and the new words he’d brought into the public sphere — glasnost (transparency) and perestroika (reconstruction) — were a path of reform…not its dismantling.

Even on the day the Wall fell — November 9, 1989 — nothing that morning as people woke up presaged what would happen that night. The president of West Germany was traveling abroad. In East Berlin, a bumbling bureaucrat misspoke at a late evening press conference, saying that his country men and women would now be allowed to apply for passports. But what people heard was possibility. And what followed…was the final unraveling of fear. The Wall had never had a chance against this mass of humanity, but for 40 years, that mass of humanity had not felt its power.

Since 2003, Tippett has been interviewing poets, scientists, theologians, musicians, and authors, seeking a common way to discuss topics sidelined into religion, without religious jargon. Back in 2010, Tippett interviewed Mario Livio, a now-retired senior astrophysicist at the Space Telescope Science Institute, the science nerve center for the Hubble Space Telescope.

Livio, who is Jewish, was born in Romania in the 1940s under Soviet Communism. He lived with his grandparents when his parents were forced to flee for political reasons. At the age of 5, he and his grandparents immigrated to Israel. Free to follow his own curiosity, he became an astrophysicist.

Although Livio doesn’t think of himself as religious, he authored a book called Is God a Mathematician? In it he uses words like omnipotence and omnipresence to describe what can come from a human-created math equation. Such equations lead to mind-blowing discoveries, beyond human comprehension, like dark energy, and the acceleration of an expanding universe, leading scientists to say, “Who ordered this?” I’m especially thankful now that minds like Livio’s have been freed up to explore the universe.

Sometimes remembering what small specks we are in the universe evens out the differences between the weak and the powerful here on Earth. The unblinking face of a Ukrainian mom throwing a homemade bomb at Putin’s Russian tank may be more powerful than we think.

Krista Tippett’s podcast can be found at onbeing.org.