Twirling Towards Sounds of Scotland 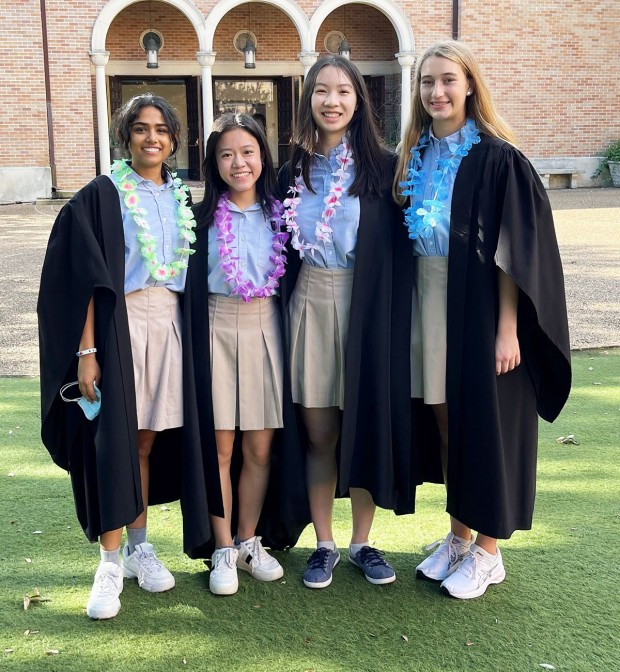 St. Thomas’ Episcopal’s Sounds of Scotland is an annual event highlighting performances by the school's five-time world champion Piping and Drumming Band alongside their premier Highland dancers. Training all year, students from fifth grade through high school are prepared to give a show you will never forget! This year’s Sounds of Scotland is very special for STE students, as they have not performed in the show in three years due to Covid. Students will be performing at the event to be held March 25 at 7 p.m. at the Smart Financial Centre in Sugar Land. Senior premier dancers Bharthi Mohan, Campbell Brickley, Caitlyn Nguyen, and Pearl Zhang will all be highlighted in a senior dance along with many other numbers.

Bharthi Mohan, a senior at St. Thomas’ Episcopal, began highland dance as a second grader. “I was already doing Indian dance (bharatnyam), and my mom thought I should try this type of dancing out. At first I was shy and not that good, but I just kept at it,” Bharthi said. Years later, she has been able to travel to Scotland her sophomore year and compete in the US championships and the Word Qualifiers, along with several other championships in the US and Scotland. “To be able to compete alongside so many champions and eventually becoming one myself was such a gratifying experience,” Bharthi said. Competing in highland dance taught Bharthi how to perform well under pressure and how to make friends.

“Now that I’m going to college in a completely new state with nobody I know. I can fall back on these skills and experiences to help me make new friends in college,” Bharthi said. Though there have been times when dance has been difficult, Bharthi knows it was worth it with the opportunities she was given to compete worldwide and the invaluable way it shaped her life. “I know Sounds of Scotland will be such an emotional experience, in a way signifying as my last Highland dance performance,” Bharthi said.

Campbell Brickley, a senior at St. Thomas’ Episcopal, loves the competition aspect of highland dance along with the opportunity to make friends with other dancers across the world. “Making friends was amazing, but it also taught me perseverance and discipline that I can use in other areas of my life,” Campbell said. Campbell is especially excited to perform this year, as she hasn’t performed at the show in three years. One of the struggles that Campbell, along with many of the other dancers faced, is simultaneously preparing for the Dunedin band and dance competition the following weekend after the show. The six numbers from the show along with competition dances is a challenge to prepare for, but practices every day after school together help the dancers prepare. Campbell is looking forward to the performance and knows it will be an unforgettable night. “Fifth grade me would be so proud that I stayed through all of these years, and I got to do my senior spotlight,” Campbell said.

Caitlyn Nguyen, a senior at St. Thomas’ Episcopal, is bittersweet about her last year of highland dancing at Sounds of Scotland. “I remember looking up to the senior premiers, when I first started dancing. I can’t believe I’m finally dancing at my last Sounds of Scotland,” Caitlyn said. Along with performances, Caitlyn also competes across the nation. “The competition is the part I like the most about dance. It taught me determination that I wouldn't have been able to gain anywhere else,” Caitlyn commented.

Caitlyn is most excited about her senior number that she choreographed with Highland Dance teacher Donna Cusack called "I Hope You Dance" by Lee Ann Womack. “The song means a lot to me because my mom sang it to me when I was little. It’s telling me to take that leap of faith when things get tough in dance and in life,” Caitlyn said.

Pearl Zhang, senior at STE, began highland dance when she began attending in sixth grade. Before coming to STE, Pearl recalls seeing videos of highland dancing during the open house going to the annual Sounds of Scotland the following spring. “Highland dance was unlike any other type of dance I had seen before, and I loved how it combined such graceful and energetic movements into one cohesive dance,” Pearl said. After I joined, I continued to love the same things about highland dance, and I was also excited for the opportunities to compete. “Having to regularly dance in front of strangers has definitely helped with doing other things in front of people I’ve never met before, such as when I compete for martial arts or when having to do a violin audition,” Pearl said. It helped her gain confidence and valuable experience in dealing with any mistakes made on the spot.

Pearl is most excited about her senior number, as she has never choreographed a dance for Sounds of Scotland before. “I've been preparing by doing a lot of practicing for my steps so I can go onstage, do my best, and have a great time! It's such a great way to wrap up my senior year of high school,” Pearl said.

Sounds of Scotland will be a unique performance, one night only. Buy tickets online at the Smart Financial website now.