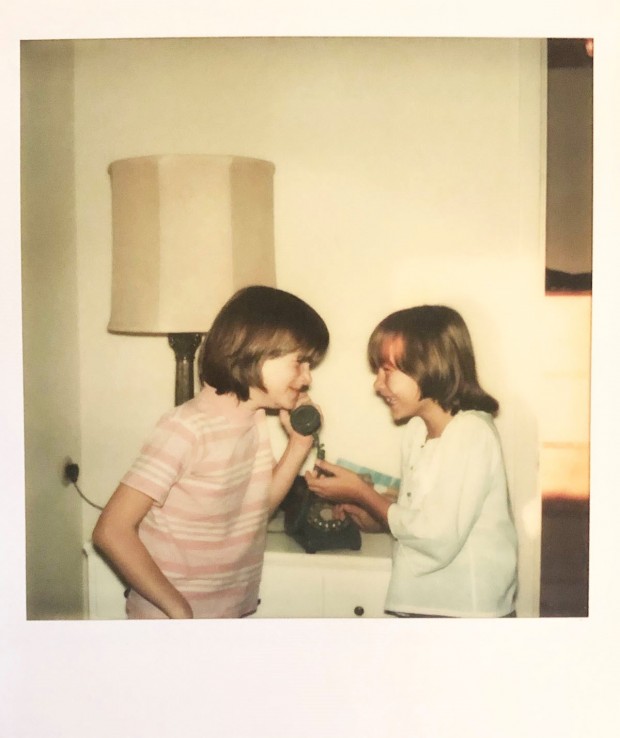 Valerie Hartzell and Dorothy White on a prank phone call mission at Karen Vine’s 10th birthday slumber party in 1976. (Yes, the photo was taken with a Polaroid instant camera!)

“Is your refrigerator running?”
“Yes…?”
“Then you better go catch it!”

If you are familiar with this dialogue, there is a good chance that at some point in your life, you made – or received - a prank phone call!

Before Caller ID was invented, people would gleefully answer their home phones with no idea who was calling. Aww. The golden age of prank phone calling.

Buzz neighbors shared their prank phone call adventures. Some of the names have been changed to protect the innocent.

My personal prank phone call career began in the late ’70s with my main partner in crime and lifelong friend, Valerie Hartzell. The times we would prank phone call started innocently enough during a slumber party, watching movies and eating popcorn (sometimes even Jiffy Pop . . . microwave popcorn wasn’t a thing yet. Come to think of it, microwaves weren’t a thing yet, either!). One too many glasses of cherry Kool-Aid and we were suddenly “drunk” on sugar. Always a dangerous mix!

Valerie and I were usually improv prank phone callers. We would just dial random numbers to see if one went through (a recording did not come on saying “We’re sorry but you have reached a number that is disconnected or no longer in service”).

If someone answered, we just went with it. We typically had to hang up not too far into the call because we started laughing too hard!

One West University native shared her memories (she asked to go by the codename BB):

“The year was probably around 1956 or ’57. I just remember prank calling a store and asking if they had Philip Morris [cigarettes] in a box. Then we’d say to let him out. So bad I didn’t think it was worth mentioning!”

Stacey Roberts reflected, “My childhood friends and I made prank phone calls but the only ones we remember are the two standards of ‘Is your refrigerator running? You better go catch it!’ and ‘Do you have Prince Albert in a can? You better let him out!’” (Note: Prince Albert was pipe tobacco that came in a can.) 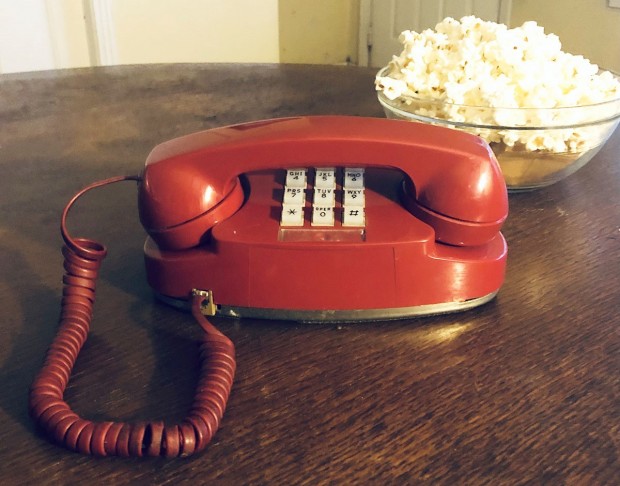 A phone ready for a prank caller to have some fun.

Another Buzz reader shared his adventurous prank call. “During one summer in high school, while very bored, some friends and I called an escort service to visit the kid next door. She pulled up in a Camaro and knocked on the door while we watched from the window in my father’s study. Needless to say, the boy-next-door’s mother was not thrilled!”

Sandy Smith, now a responsible mother-of-three, showed that it is not only the kids who get to have prank phone call fun.

“When Tab and I were dating, he lived in a rental on Evergreen. One weekend we bought a bunch of flowers and planted them in the front yard. It looked nice, but far from being professional. But he was proud.

“The next day I got my girlfriend to call (before caller ID) and pretend to be ‘Bunny Goldstein’ with the Bellaire Garden Club. She told him he had won Yard of the Month and that she would be over later that day to put the sign in his yard.

“He bought the whole story. Later, my friend and I showed up at the appointed time and he told us the story and then we got him when my friend revealed that she was Bunny Goldstein.”

After decades of dialing, mischievous pranksters may have met their match.

I recently saw this hilarious statement online: “Gotta love the irony of a generation raised on making prank phone calls now being terrorized by daily robo-calls!”

A few shared their adventures battling the bots.

“Sometimes I will start cursing at the robo-caller,” Frank Stanford remarked. “Of course, I only do this if I'm certain it’s the robo-voice instead of a real person. I shut down a robo-caller named Jason hard, today. Yes, I swore at a recording.”

A distinguished great-grandmother wasn’t so lucky. “A few months ago, I was having a bad day. When I received yet another robot phone call, I was so frustrated, that I loudly said ‘f-you!’ into the phone.”

The cussing grandma was quite surprised when, a few seconds later, a real person replied in a quiet voice, “Well, f-you, too!”

After getting over the shock, she got a good laugh and is now careful what she says on the phone!

These days, with smartphones that tell you who is calling and Potential Spam warnings on the screen, has the art of prank phone calling officially ended? There just might be some hope.

Recently, two Buzz-area friends, both moms to middle-school aged children, were visiting at a Saturday evening cocktail party. One mom laughed, mentioning that the night before, her son had received a phone call from a bunch of giggling girls who must have been at a slumber party. The son didn’t know who had called but they had left a voice message. The other friend said that was funny because her daughter had been at a slumber party the night before. Sure enough, when the Boy Mom played the message, the mystery was solved because the phone number on Caller ID belonged to the daughter! The moms were cracking up.

For some more prank phone call fun, watch this actual prank call acted out in a real ’90s commercial for a telephone caller ID company, showing how the product could discourage prank phone calling! And in this scene on The Simpsons, Bart – who’s known for his prank phone calls – just might get outpranked by his dad, Homer.