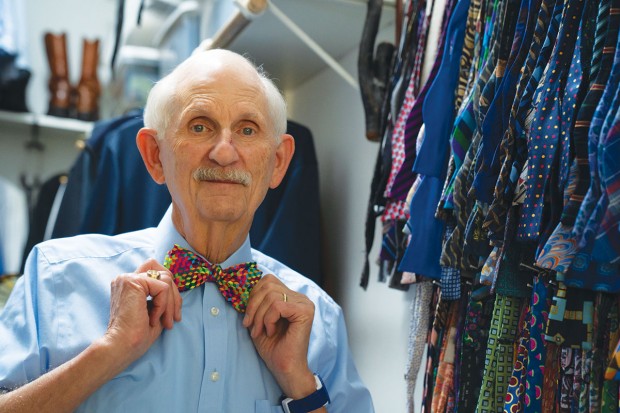 Despite his Harvard/Johns Hopkins education, Dr. Ben Portnoy is anything but stuffy. In his waiting room sat a sign, pointing to his portrait. “Would you buy a used car from this guy?” Among the patient “giveaways” were black matchbooks that read “Keep smoking, it’s good for business.” Inside his own office, pigs – plastic, glass, stuffed, large, small – covered his desk and floor.

Before Ben became my primary-care physician, he, wife Cookie, and their three daughters were my next-door neighbors. Sadly, with his retirement in 2020 came the retirement of his bow tie collection. Gladly, among his many talents, Ben is a storyteller, who now has more time to commit some to paper. In this column, I want to share his thoughts on bow ties, but I wouldn’t be able to say it better than Ben himself.

By the way, I showed my ignorance by asking Ben the definition of a four in hand tie as referenced below, suspecting I was setting myself up for some delightfully twisted response. What sartorial ignorance!

For those sartorially ignorant like me, it’s just the standard long tie. I had to look up sartorial too. You’re on your own on that one. Here’s Ben.

Everyone has their own style, I suppose. Most people probably are not aware of their style and simply dress in a way that reflects the current fashion. You do not see many men now wearing bowler hats. It would be odd for a woman to go to a party wearing a hoop skirt, unless, of course, it was a Halloween party. We just deck ourselves out in a way that looks about right. I mostly fall into that category, but there is one exception – bow ties.

Ties are an item of clothing that appear to be going out of fashion. In hospitals, long before Covid struck, it was decreed that ties should not be worn. The fear was that the four in hand tie would dangle freely from the doctor’s neck, touch a patient, and become contaminated. Then it would serve as a vehicle to spread infection. So, male doctors quickly shed their ties.

Among men in other professions, I note that ties are also disappearing. On television, it is not odd to see a reporter or talking head with an open collar shirt.

I have always favored bow ties and wore a bow tie daily. Bow ties are a bit sassy I think, and that is what has appealed to me. Over the years, I have bought many bow ties and have been gifted a fair number. I now have about 250 bow ties hanging uselessly in my closet. It is painful that after retiring I no longer wear a different tie each day. Formal events are now rare due to Covid, and, even at those rare formal events, I note that open collars are more in style. Does one wear a bow tie to the opera, to the theater, out to dinner, or to the synagogue? No one says that I shouldn’t wear a bow tie to these places, and a tie is generally tolerated, but it feels funny if no other man is similarly dressed.

I am 77 years old now, and, inevitably, at this point in life one thinks about death. Questions like how long I will live, how I will die, and have I done all I want in life come up. But I barely pay attention to these questions. Whatever will happen will inevitably happen. But I do think about my ties. Should I pick out one to be tied around my neck after I am dead? No, that doesn’t work either. We Jews are buried in a plain shroud, and traditionally coffins are not open for viewing. So, there’s no use for a bow tie in this circumstance.

Oh, the troubles one faces in this life! Decisions are often hard to make, and what to do with my bow ties is certainly one of the most difficult. I will face this with my usual solution . . . procrastinate. The bow ties will remain hanging in my closet, and I will visit them there. Even not tied around my neck, these old friends make me happy.

What? Ben feels funny being the only one in a bow tie? Ben – who shows up for Christmas parties in a red and green yarmulke? At Halloween – the meat cleaver through his head?

As an Internal Medicine and Infectious Disease doctor, something about the bow ties, pigs, and funny matchbooks brought levity to those facing serious health issues. Ben was among the first doctors to treat Houston’s earliest AIDS patients.

In 2009, I mentioned to Dr. Portnoy that I noticed I was walking slower and that I couldn’t ride a bike anymore. An MRI revealed a brain tumor the size of my fist, a benign meningioma, followed by a 10-hour brain surgery by Dr. David Baskin at Methodist Hospital. Dr. Portnoy’s frequent visits to my nervous waiting family in bow tie and jacket were a great comfort, my father said.

“You’ll be fine,” Dr. Portnoy reassured me before the surgery. He was right.