No Rest for the Wicket 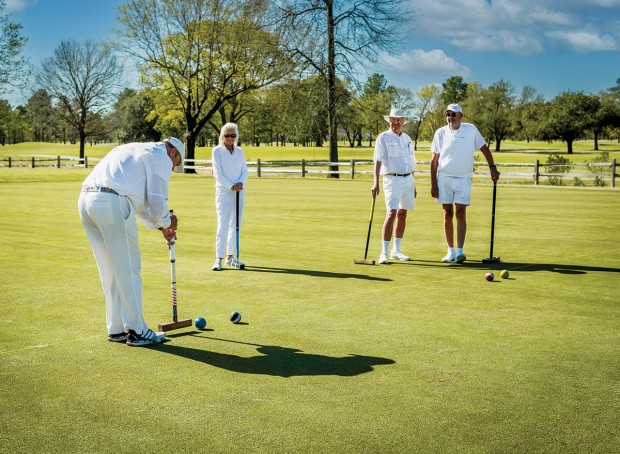 “I could barely walk, my knee was so swollen,” recalls John of the errant hinge that buckled at the most inopportune times, thanks to a decades-old lacrosse injury. So, as he hobbled away from the Bayou Bowl tennis tournament here in May 2011 – a Bayou Club annual event – his wife, Georgia, suggested a sports alternative.

There, on a court of well-shorn grass in Memorial Park was a smattering of people, dressed in brilliant white, sending balls through staked wickets with a whack of a mallet. The Bayou Bowl also included competitive croquet. Doesn’t it look fun, she offered? 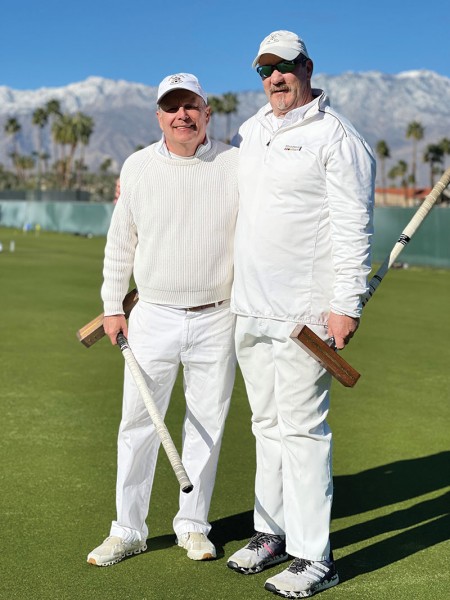 “If you ever catch me on a croquet court, I’ll have to leave you. That’s the most emasculating, unathletic thing I’ve ever seen in my life!” John deadpanned. “Don’t ever suggest it again.”

A few months passed and Sweet Georgia Brown, as he affectionately calls his betrothed, suggested they attend an exhibition game at the Bayou Club during its annual Croquet Week.  “His knees were just so bad. I thought, ‘Come on, already! This could be a fun sport!’” recalls the avid equestrian, determined to lead this horse to water. But would he drink?

They went to the Friday night match that October. John sat, riveted, his former image of croquet dissolving with the setting sun. “He’d viewed it as an old person’s sport. The sport of last resort,” quips Georgia. “By the time we left, he was hooked.”

She signed him up for the member-only club’s weekend tournament.

Typically, players take lessons from the club’s visiting pro the week leading up to the tournament. John took no such lessons, receiving a few tips from the instructor an hour before competition. He was paired with a different doubles partner for each match, experienced teammates who taught him the rules along the way. He won all his matches. And was named Player of the Weekend.

“Croquet? He crashed right through the gate and out the back fence,” Georgia says of his unexpected obsession for the sport.  “And he’s still going.” 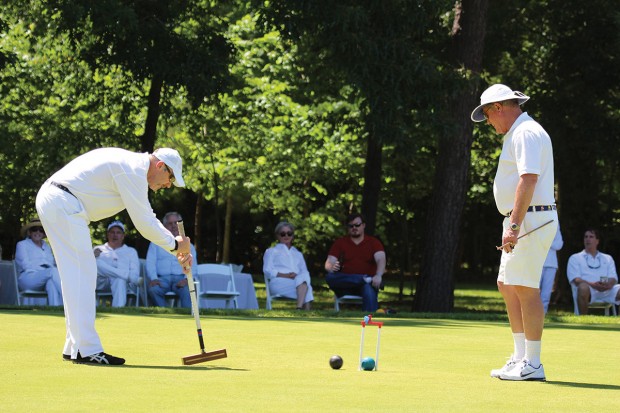 Competitive croquet. It’s not that anything-goes childhood game where players gleefully ignored rules, whacking opponents’ balls into the hedges. Players spent most of their time wrestling the nine flimsy coat hanger-like hoops that refused to stay staked to the ground. It was a fun backyard romp, little thought to strategy.

No, this is mega-cerebral and structured American Rules six-wicket croquet, a calculated sport of smarts, skill, and timing, with a series of strategically placed, immovable, narrow steel wickets barely wide enough to get a ball through. It’s played on a regulation size court. Two forms of the game, association croquet and golf croquet, have rules that are agreed upon internationally and are played in many countries around the world. The United States has its own set of rules for domestic games.

The sport is played between two sides – the blue and black balls versus the red and yellow balls. In singles, each competitor plays two balls; in doubles, each player plays the same ball throughout the game. The object of the game is to maneuver the balls through the course of wickets in both directions, and into the center stake.

Played by young and old alike, the sport is gentle in terms of bending and flexibility. It’s primarily a mental competition with equal opportunity to get pummeled by savvy opponents. Participants must think strategically, plotting moves ahead of the competition. A sprightly 25-year-old can get schooled by an 85-year-old and never see it coming. 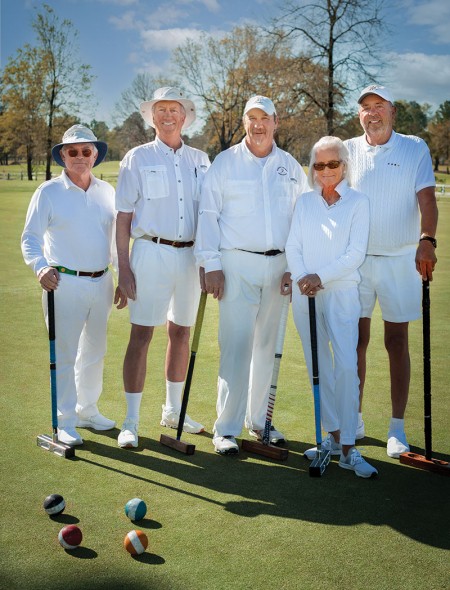 Tournaments are divided into flights, with each flight containing a reasonable number of players of approximately the same ability. For example: third, second, first, and championship flight.

It’s a healthy mix of camaraderie, strategy, and outdoor fun. And you better bring your A game, says John, named Rookie of the Year by the USCA in 2012, just months after his introduction to the sport.

“Boy, was my initial idea about croquet wrong,” admits the championship-flight player and newly elected president of the 95-member Houston Croquet Association. His unabashed enthusiasm has served him well. He practices – a lot – and has the trophies to show for it.

Among some of his wins, the Texas State Championship in 2016 and the 2021 USCA Club Teams Championship at the National Croquet Center in West Palm Beach, Fla. that he won with teammate Bob Pulitzer, making them that year’s top duo in the country.

John, 63, had replacement surgery on both knees a few years back. Having hinges that don’t zig when you want to zag is a mental boost, says the Royden Oaks resident.

“Croquet is attractive to a lot of older people who might have joint, knee, hip, or whatever else issues. It’s easier on the body. But knowing that my knee isn’t going to do something funky on me helps my peace of mind. You’ve got to stay sharp out there. I never ever would have imagined that I would elevate to national standing status in this game.”

He credits mallet maven Anne Coco as a mentor. “She’s one of the best tacticians in the game,” he says.

“Well, I’d better be good,” quips Anne, 65. “I’ve been playing 27 years.” She has a trophy room of championship flight accomplishments as testament. 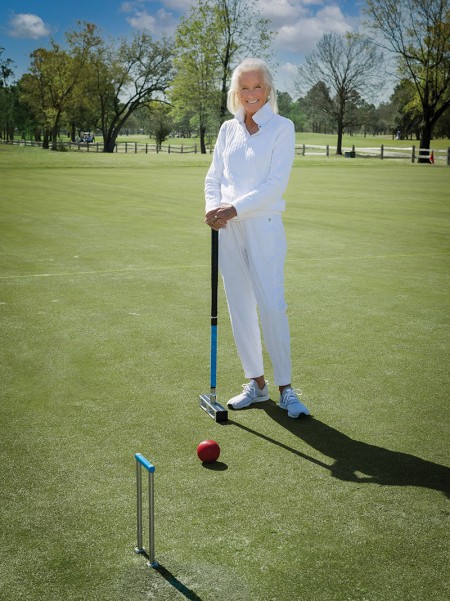 Anne Coco, known for her strategic skills at croquet, has the championship trophies to show for it. (Photo: Dylan Aguilar)

Anne, a pint of a woman at 108 pounds, is quite the force. “Croquet is like chess and billiards,” she explains. “You must think a lot, but you also have to do the shot making. You have to keep track of all of that in your brain and use your strategy at the same time.

“I’m not going to let those boys run all over me,” she wisecracks. “John says I’m the best tactician in town? Well, the reason he says that is because they do all these big full-roll shots across 100 yards. I can’t do that. I’m little. My strategy has to be different than their strategy because I have to think outside of the box.”

“Anne taught me everything I know. I might not have all the trophies she has, but I have my trophy wife,” jokes husband Stuart, also adept at the sport, and vice president of the Houston Croquet Association.

Anne is a champion in more ways than one. Diagnosed with Parkinson’s disease seven years ago, she allowed herself a 15-minute cry, then went about battling the ailment with the same top-game determination and strategy she employs every time she takes the court. She took a seven-year sabbatical from tournament play and recently had deep brain stimulation surgery to reduce the disease’s symptoms. 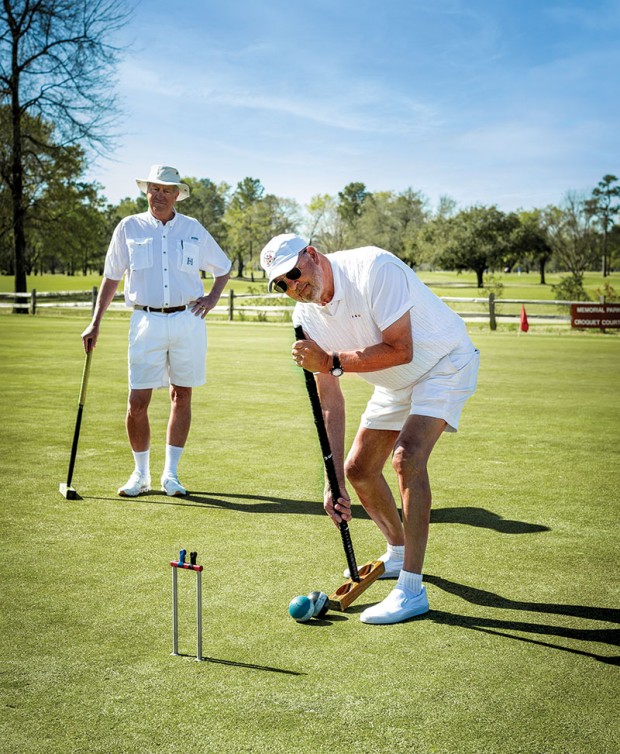 “I immediately felt 40 percent better,” she explains. “It took care of these movements in my left leg and left arm and the stiffness in my arm. Those symptoms were causing me great anxiety and that anxiousness, of course, affects your play.”

The croquet veteran is back to tournament competition, recently playing in the Club Teams tournament in West Palm Beach. “I did pretty well!” she says. “I won one out of four games, but I was playing against -4.5 handicaps and I’m a 2.5+, so it was like playing against Tiger Woods. I’m happy with it!”

They say that tango and boxing are good for Parkinson’s patients, Anne adds. “For me, it’s croquet!”

Retired attorney Lee Hamel is a longtime player, too.

“I was smitten with the sport of six-wicket croquet from day one,” the accomplished first-flight player says of his introduction to the sport in the early 1990s. He saw a tidbit in the newspaper about the Houston Mallet Club, the predecessor to the Houston Croquet Association, and went to check it out. Players were practicing on a polo field. The city had no croquet courts then.

He chaired a committee to find a croquet venue, rallying for courts to be built at Memorial Park. “I got wind that the fairways and greens at Memorial Park were being expanded and it would be a natural time with the equipment in place to add a couple of croquet courts, at the end of their work on the greens. We talked to the parks department and the players were willing to put up the money for the contractor to do it.”

Those courts were in use for more than two decades. Two new pristine croquet courts, 105 by 85 feet, recently replaced them in the park, overlooking the final 50 yards of the 10th golf fairway.

“It’s just beautiful out there,” says the 81-year-old who has won several first-flight regional tournaments over the years. 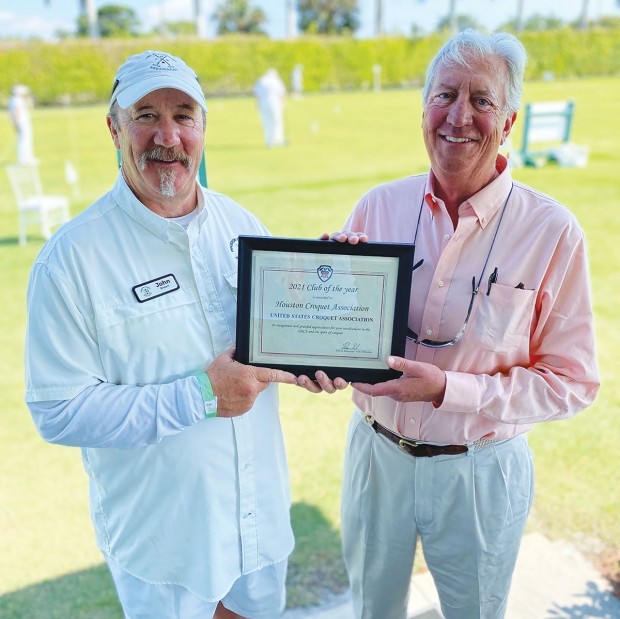 John Watson, a successful first-flight player who just retired after 14 years as Houston Croquet Association president, says it’s best to shelve the emotions while competing. “My advice: if somebody’s trying to knock you out of a wicket, don’t take it personally. It’s the way the game is played.”

There aren’t many injuries in croquet, he adds. “This is a sport you can play when you’re old that doesn’t screw up your knees and back. We’ve had some people hit themselves with a mallet in the foot or ankle, but other than that….”

John Brown – he who first balked at the mention of croquet – recalls “getting thrashed” by a woman who could barely move about the court when he first started playing at championship level. “That’s the beauty of croquet,” he says. “It’s the great equalizer. It’s not that you must be strong. You must be a good tactician, steady and smooth.”

Oh, and be prepared to stand out if you don’t change out of your all-whites at the tournament’s end. “One time I got on my plane home but didn’t have time to change,” he recalls. “I’m pretty sure everyone thought I was a painter or worked in a psych ward.”

The public is welcome to watch the 2022 Texas State Championship tournament, May 19-22, at the Memorial Park Croquet Courts, located behind the Memorial Park Tennis Center near the 10th fairway of the golf course. 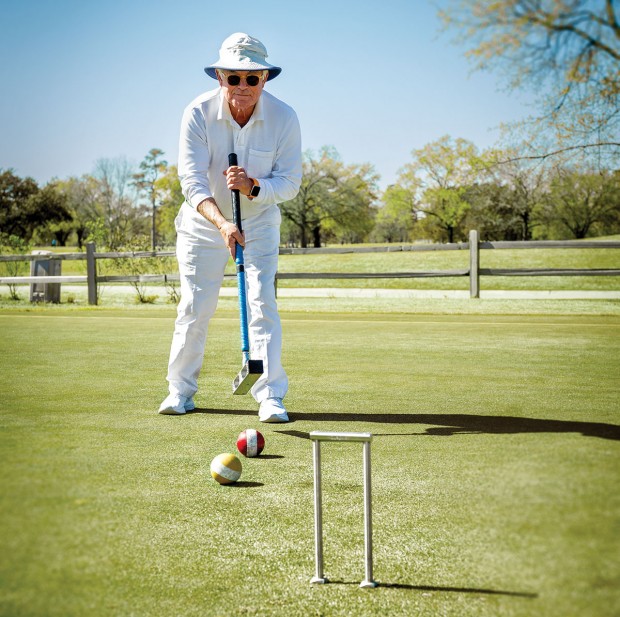 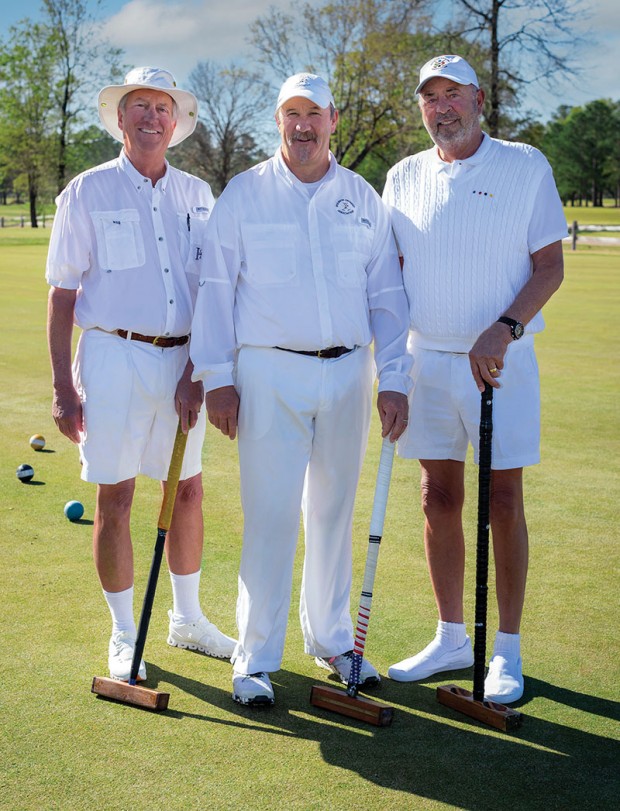 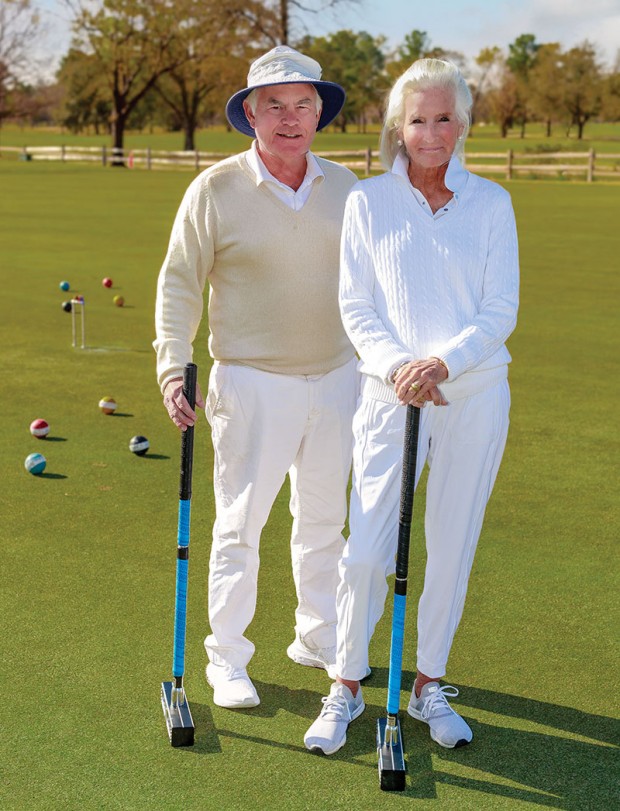 Anne Coco, a master tactician at the sport of croquet, relishes time on the court with husband Stuart. (Photo: Dylan Aguilar)