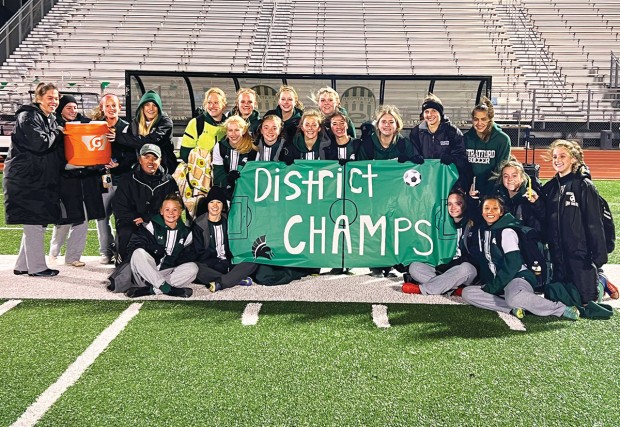 HISTORIC SEASON The Stratford Spartans girls soccer team won its first ever district championship at the Class 6A level this past season. The Spartans then went on to advance to the 6A Region III Soccer Tournament.

It was the greatest season in school history for the Stratford Spartans girls soccer team, which captured its first-ever district championship at the Class 6A level, while also advancing to the Class 6A Region III tournament.

“It means the world to have this type of season,” said Spartans head coach David Walters. “We won a district title in Class 4A back in 2013, but this was our first championship in Class 6A. Since the beginning of the season, the girls set their sights on beating Memorial and then winning a district title. I’ve received numerous compliments from other coaches on how our girls battle and never quit. They hustle and fight for every loose ball and it’s just testament to their work ethic. I couldn’t be any prouder.”

As good as Stratford was doing the regular season, the team took its game to an even higher level in the post-season playoffs while defeating a trio of opponents to earn a spot in its first regional final four. In addition, the Spartans were ranked among the state’s top 15 teams in Class 6A soccer. “That’s a first for us to have that high of a ranking,” said Walters. “To have that recognition from your peers is really special.”

“We have great chemistry on this team and we’re very close, which is another big reason for our success,” added Stratford senior Hope Coltrin. Spartans junior Rileigh Toner shared similar sentiments. “This team just has a great connection. It’s been an amazing experience to play with these girls.” 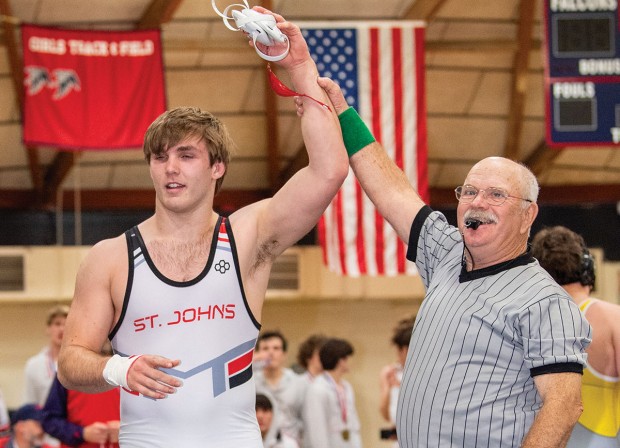 MIGHTY MAVERICK St. John’s Mavericks senior John Perdue capped off a sensational wrestling career by becoming the school’s first ever two-time National Prep All-American. Perdue is pictured here after his victory in the finals of the SPC Championship Meet.

“This was also probably the most fun group of all the championship teams we’ve had,” said Paul. “Some of the guys have been competing together since kindergarten and I even taught some of them first grade P.E. It’s a very close-knit group.”

As for Perdue, the Mavericks senior capped off a sensational wrestling career as a two-time state champion while also becoming the only two-time National Prep All-American from St. John’s. “Not only is John the greatest wrestler in St. John’s history, but he’s also the greatest all-around athlete to come through our school,” said Paul. “John was our star quarterback and last year when the wrestling season was suspended due to Covid, he then goes out and joins the swim team where he breaks the school record in the 50-yard freestyle. It was amazing.” 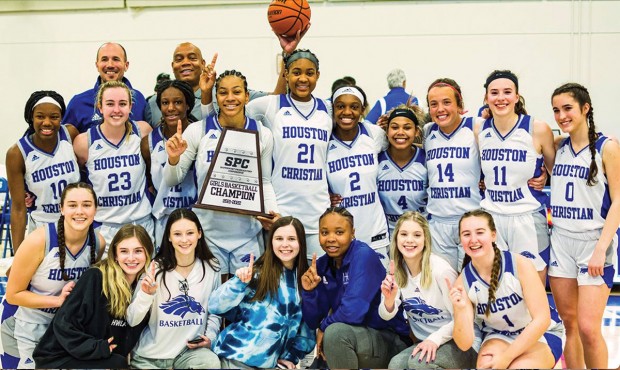 UNDEFEATED CHAMPIONS The Houston Christian Mustangs won their first ever SPC Championship in girls basketball while posting a remarkable 33-0 record on the season.

The Houston Christian Mustangs girls basketball team capped off a perfect undefeated 33-0 season by winning the SPC Championship. The Mustangs rolled over Episcopal 87-43 in the SPC final to capture its first SPC championship in girls basketball.

“It’s super exciting,” said Mustangs senior Kayla Mackel. “We’ve been preparing and building this program up since I’ve been a freshman.”

Leading the way for the Mustangs in the SPC final victory was star junior Loghan Johnson, who scored 28 points in the win. “This team was amazing,” said Johnson. “It’s not an easy task at all to go 33-0.” Another star player for the Mustangs was junior D’Asia Thomas who, like Johnson, will play major college basketball. “Being the first girls basketball team to win SPC from Houston Christian is so exciting and special,” said Thomas.

The Mustangs went undefeated this season behind an enormously talented lineup. “Four of our first five starters can play major division one college basketball,” said Mustangs head coach Ryan Bickham. “We have another girl off the bench that’s also a Division 1 recruit. The talent level is unbelievable and fun to coach. Plus, there’s lots of togetherness on this team. The ‘we over me’ mentality was great.”