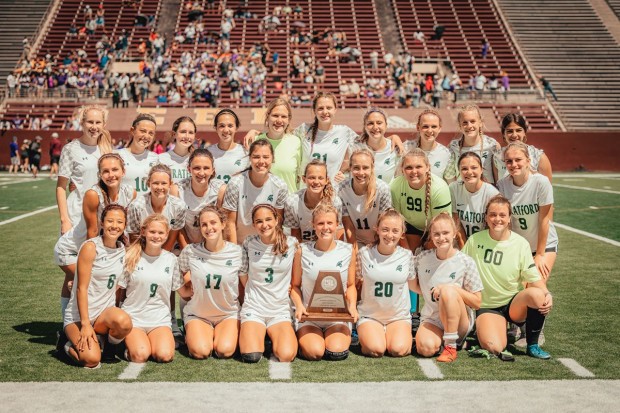 Stratford Girls Soccer made it all the way to Regional Finals.

The team’s mantra “I am because we are” rang out as the Spartans finished 13-1 in district play and were named 17-6A 2022 District Champs. This year, the Spartans successfully played their way to the Regionals Finals - just one game short of State.

Head Coach David Walters began to have a good feeling about this team at the end of last season. He explains that as the Spartans wrapped up their 2021 season in the 3rd round of the playoffs, he realized that almost the entire starting lineup would be back in 2022.

This year’s team has so many key players, and they all make a difference.

In January, the Spartans opened the pre-season with an excellent showing in the Georgetown tournament. In the tournament, Stratford faced a state-ranked team and won. Junior Lauren Ahearn says that Georgetown was the first time most team members knew their team was going to be really good. Ahearn shares that “we beat a ranked team and felt like if we could beat them, we could compete with anybody.”

Ahearn says her best memories from this soccer season are when we beat Memorial, not once but twice. She explains, “It was the first time we had beat them in eight years so to win against them felt amazing. Our whole team bonded so much after the wins, and we all became so close.”

When asked about his favorite story, Coach Walters says, “There are many but if I had to pick one, I’d have to say our Regional Semi-Final victory over Westbrook." Walters explains how Team Captain Hope Coltrin had just scored a huge goal to give Stratford the lead when Westbrook tied the game almost immediately. Stratford ended regulation and OT tied and had to go to penalties to decide the game. Walters assigned Claire Holcomb, the reserve goalkeeper, the job of coming into the game cold and winning the game for us. She’s very good at stopping penalties. Claire made two huge saves that helped us advance to the Regional Final! He concludes, “I was so happy for her, what an amazing moment that was!”

When asked about game-changers and leaders, Ahearn says the first person that comes to mind when she thinks of leaders is Team Captain Rileigh Toner. Ahearn says, “Toner is one of the most impactful players I have ever seen. Whenever she is in the game, she never stops running and hustling for everything, even if it's not her job to do." Ahearn adds that Toner is a leader, who works nonstop because she wants her team to succeed.

When asked about stand-out players, Coach Walters points to the team captains - Hope Coltrin, Cameron Ballard, and Rileigh Toner - they are a big reason for the team’s success.

Walters says, “Our captains really propelled us to achieve our goals.”  He adds that it’s more than their outstanding play, “it is their leadership, focus, and ability to bring other players along and make them better - that is what makes them great.”