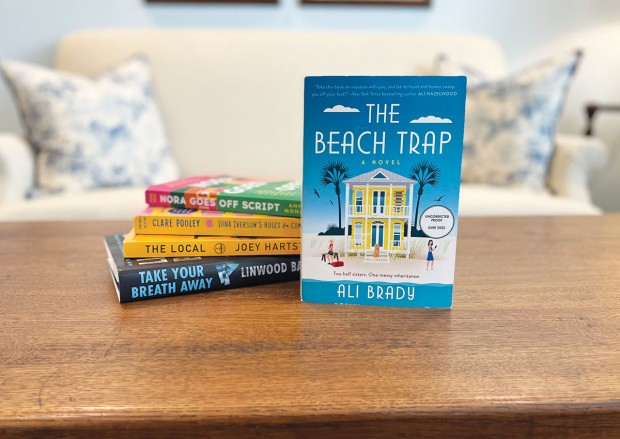 WHAT TO READ This month’s picks include two fabulous thrillers, a novel about the importance of community, and two fun beach reads.

The Beach Trap by Ali Brady – When Kat Steiner and Blake O’Neill meet at sleepaway camp, their connection is immediate, but the girls’ relationship ends abruptly when they realize they are half-sisters. Flash forward 15 years, and Kat and Blake are dismayed to find that when their father died, he left them joint owners of the Destin, Florida family beach house. Blake, who supports her ailing grandfather, wants to sell the beach house, while social media influencer Kat refuses to sell because she has so many fond family memories from her time spent there. The women decide to take the summer to renovate the worn house with the agreement that by the end of the summer Kat will buy Blake out or they will sell it and split the money. As they begin to work on the house, the two women slowly get to know each other better as they come to terms with their shared past and learn what it means to be sisters. Ali Brady, pen name for the writing duo of Bradeigh Godfrey and Alison Hammer, hit the ball out of the park with their debut – the story is just so well-done. The writing is vivid, and I felt like I was transported to the beach or living in the beach house. The Beach Trap is a sweet and uplifting story that had me cheering for Kat and Blake to resolve their differences and come to terms with their family’s sordid past. It will be the perfect book to take to the pool or the beach this summer.

Iona Iverson’s Rules for Commuting by Clare Pooley – Magazine columnist Iona Iverson rides the train to and from work every day, seeing the same people to whom she has privately given nicknames such as Mr. Too-Good-To-Be-True and Smart-But-Sexist-Manspreader. None of the commuters ever speak to one another until the day when one of them chokes on food and is saved by another rider. This incident makes Iona realize that she wants to learn more about her fellow riders, and she begins to develop relationships with them as she rides, inserting herself into their issues, helping solve their problems and even becoming friends with some of them. I loved the characters and the way they develop, interact, and come together, the stellar writing, the storyline and the ending. Infused with heart and humor, this book demonstrates the importance of community and the ability of relationships to change people’s lives while also serving as a reminder that people should not be judged by their appearance. I highly recommend this gem of a book and was so sad when it ended.

The Local by Joey Hartstone – When author Joey Hartstone learned that the small East Texas town of Marshall is improbably one of the most popular places in the United States to argue patent cases, he knew he needed to set a legal thriller there. The Local follows attorney James Euchre who serves as local counsel to the patent attorneys who file hundreds of cases a year in Marshall. When Amir Zawar, one of his patent clients, ends up charged with the murder of the local judge, the client demands that Euchre defend him. With the help of a former prosecutor, he agrees to defend Zawar and gets dragged into the world of criminal defense. This unique and fast-paced legal thriller kept me on the edge of my seat, and I particularly loved the patent law aspects of the story. I had no idea that Marshall, Texas was such a hotbed of patent law and loved learning about that and how it impacts both the town and the surrounding area.

Nora Goes Off Script by Annabel Monaghan – In this absolutely delightful romantic comedy, Nora Hamilton writes formulaic scripts for a Hallmark-like channel. But when her husband leaves her and her two children, she mines her experiences and creates a fabulous script that gets picked up for the big screen. The movie is filmed at her home, and Leo Vance, America’s heartthrob, is cast as Nora’s worthless husband. But when filming wraps, Leo asks if he can stay on as a renter for a week to enjoy the peace and quiet and, against her better judgment, she agrees. No one is more surprised than Nora when Leo bonds with her kids and runs errands with her in town. Monaghan creates a heartwarming, hilarious, and charming story that kept me completely engaged in the story as I rooted for Leo and Nora. It is an entertaining and fun book that I read in less than a day.

Take Your Breath Away by Linwood Barclay – The premise for this fabulous thriller immediately grabbed me: One weekend, while Andrew Mason was away on a fishing trip, his wife, Brie, disappeared without a trace. Almost everyone believed that Andy murdered her, but no one could prove it, and the police didn’t have enough evidence to charge him. Now, six years later, a woman who looks remarkably like Brie shows up at his old address where his former house has been torn down and replaced, screaming, “Where’s my house? What’s happened to my house?” And then, just as quickly as she arrived, the woman vanishes. Andrew is thrown back into the spotlight as the police begin to investigate the cold case again. I read this book so quickly and thought it was an engaging and compelling thriller with an ending that made sense and fit the story very well. It will make a great vacation read.