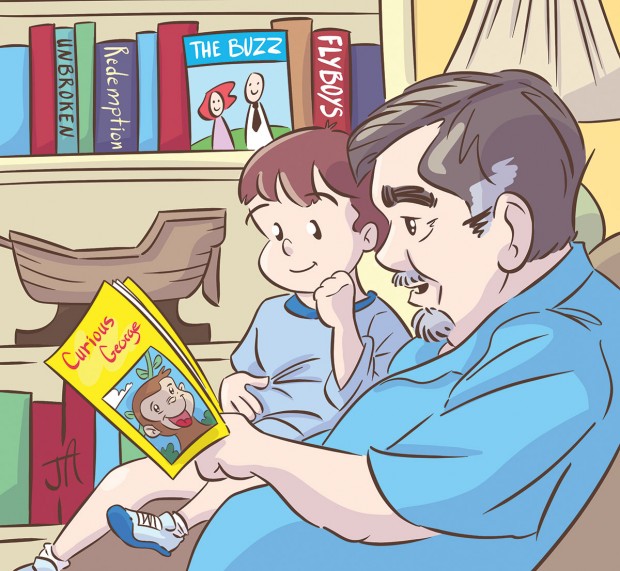 A LIFELONG LOVE Summer reading takes on new meaning when favorite books are passed from generation to generation. (Illustration: behance.net/runamokstudios)

Since she was a little girl following her dad to Saturday morning used-book sales, reading has been a family pursuit for Regina Shadle Nolan. (See For the Love of Books.) Sharing a love of history, literature, and libraries was a way for Regina to connect with her history-professor father, Bob Shadle. When Regina’s son Ethan was born (he’s 5), reading was a catalyst for connection between grandfather and grandson.

While Bob passed away in 2019, his love of reading lives on through his daughter and grandson. In this special edition of our annual “Back Porch Summer Reading” column, Regina shares what both she and her son will be reading.

“My summer recommendations always [include] something tied to Memorial Day and D-Day,” Regina says, explaining, “I get a little reflective this time of year. It’s a time of remembrance. To read the stories of our country’s history is, I think, always important.” Regina gravitates to World War II. Her suggestions are “very easy reads,” she says, “from very compelling authors. They tell the stories of actual people you can relate to. You can see yourself or a family member in them.”

Unbroken: A World War II Story of Survival, Resilience, and Redemption by Seabiscuit author Laura Hillenbrand tops Regina’s list. It also topped the New York Times Bestseller List for a full four years and was made into a movie.

Unbroken is the true story of an Olympic runner-turned-airman, his crash into the Pacific, and his ensuing fight for life, all a personification of resiliency. New York Magazine called the book a “one-in-a-billion story…wrench[ing] from self-respecting critics all the blurby adjectives we normally try to avoid…amazing, unforgettable, gripping, harrowing, chilling, and inspiring.” And Kindle readers most often highlighted this quote from the book: “Without dignity, identity is erased. In its absence, men are defined not by themselves, but by their captors and the circumstances in which they are forced to live.”

Flyboys: A True Story of Courage by James Bradley also finds a place on Regina’s patriotic reading list. It’s the story of eight American prisoners of war shot down over Chichi-jima, and what they endured at the hands of their Japanese captors. The ninth airman, shot down but rescued by an American submarine, was future President George H. W. Bush. Until Flyboys’ publication, the fate of the eight prisoners had remained a secret.

James Bradley appears again on Regina’s list with Flags of Our Fathers, the New York Times bestseller that Bradley wrote with Ron Powers about the men in the famous photograph depicting the raising of the American flag at Iwo Jima. There were six soldiers in the photo – one was Bradley’s father, John Bradley. Because he never spoke of the photograph to his family, John’s son scoured boxes of photos and letters after his father’s death, piecing together what his father experienced in Iwo Jima and what subsequently happened to the soldiers in the photo. According to James Bradley, his father John refused the “hero” status bestowed on him after his return from war, only saying: “The real heroes of Iwo Jima were the guys who didn’t come back.”

Regina’s reading list this summer won’t be entirely patriotic: She will be reading with her son Ethan in the same way her dad read with her. In fact, some of Ethan’s favorite books were gifts from his grandfather, as evidenced by a treasured photo of Bob reading Curious George Museum Mystery to him. “Ethan was a little over 2 when [my dad] died, but he talks about him,” Regina says. “I don’t know if he associates my dad with it, but he loves Curious George, and that’s what he was always bringing my dad to read to him. Now that’s what he brings to us.”

On his own, the pre-kindergartener at Veritas Christian Academy is reading the Bob Books. “They’re not the most exciting, but he can read them!” Regina says. And he loves anything by David Shannon: No, David! and Too Many Toys among them. The Berenstain Bears Honesty Counts and The Berenstain Bears and the Trouble with Chores are two more favorites.

For the rest of us, Regina recommends the Facebook group PBS Books Readers’ Club. “I get my recommendations from there,” she says. “For example, I visited Pearl Harbor in February. I posted, and tons of people wrote back with recommendations on what to read.”

Editor’s note: For more books to add to your summer-reading list, see this month’s Buzz Reads by Cindy Burnett and look for Cindy’s weekly Page Turners column at thebuzzmagazines.com.

10:00 am to 4:00 pm
Location:
The Heritage Society
END_OF_DOCUMENT_TOKEN_TO_BE_REPLACED