All Shook Up: Fans Can’t Help Falling in Love with New Elvis Movie 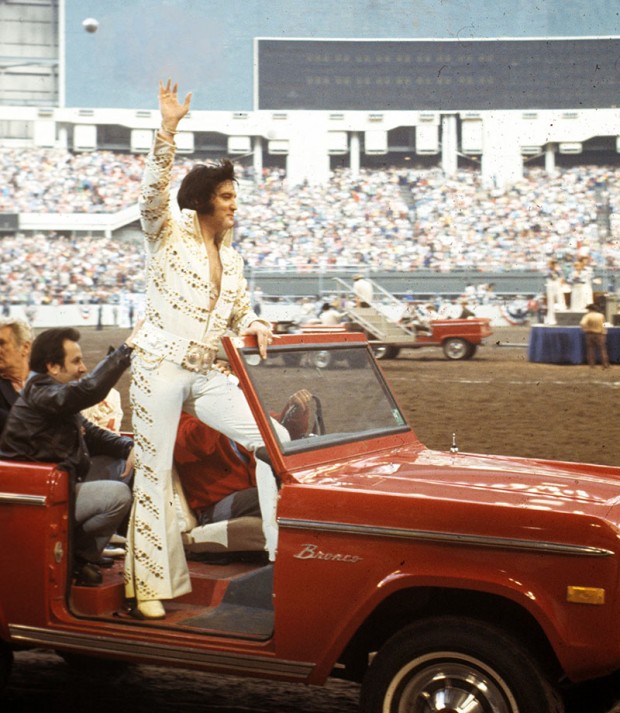 Are you ready to Shake, Rattle and Roll to see the King of Rock and Roll, back on the big screen this Friday, June 24? Elvis is back in the building…at least the movie theater building.

The new Elvis is a musical drama that follows the 1950s quick trajectory to fame of Elvis Presley (Austin Butler) and his complex relationship with his manager, Colonel Tom Parker (Tom Hanks). The film is directed by Baz Luhrmann (best known for Moulin Rouge). Most reviews are All Shook Up with excitement.

Many of Elvis’ important life moments happened in his hometown of Tupelo, Mississippi, his Graceland Mansion in Memphis, and on the Las Vegas strip. But Elvis also had some Taking Care of Business moments in Houston and with Houstonians. 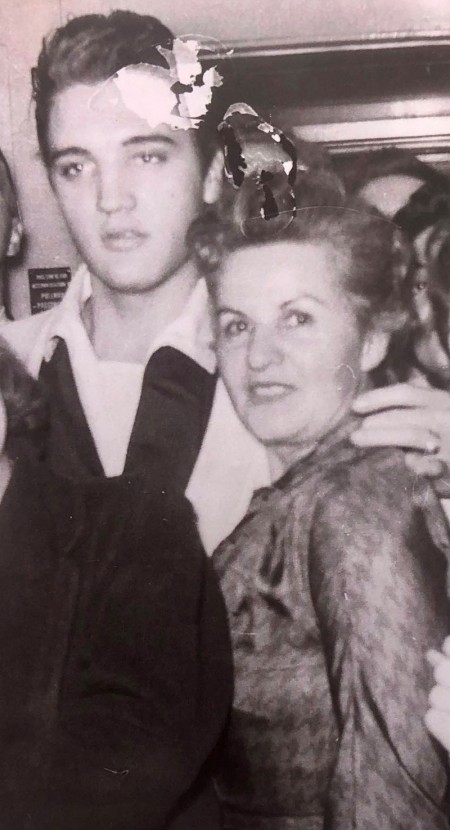 Susan Goebel was thrilled to meet Elvis and take a photo with him in the early '50s while on vacation. Her daughter, Judye Perry, now keeps the Elvis photo in a safe to help it not get damaged.

When Elvis first started to tour in the early 1950s, Judye Perry’s mom, Susan Goebel, met Elvis at a train station while on vacation and took a photo with him. Judye shared, “Elvis’ mom was there and told my mom that it was Elvis' first tour.  Mom told Mrs. Presley that she would take good care of Elvis. Mom was such a flirt, I’m sure she enjoyed saying it, but the funny part was that she was born in 1911 so she was 23 years older than Elvis.”

After her mom, a lifelong Elvis fan, passed away in 2005, Judye placed the photo in a safe in hopes of preserving it. Judye is still a big Elvis fan and was nice enough to share the photo for this article.

An excerpt from Hoofbeats, Heartbeats & Heroes: The 65-Year-Old Legacy of the Houston Livestock Show and Rodeo (1997) is as follows: “Perhaps the Astrodome was not properly christened until royalty visited, and, in 1970, Elvis Presley himself entered the building, drawing 43,614 screaming fans for one concert—a record that would stand for eight years. Presley’s participation was another milestone, much like Gene Autry’s performances nearly thirty years before. It set the stage for nationally renowned performers who would entertain a new generation of rodeo fans.” 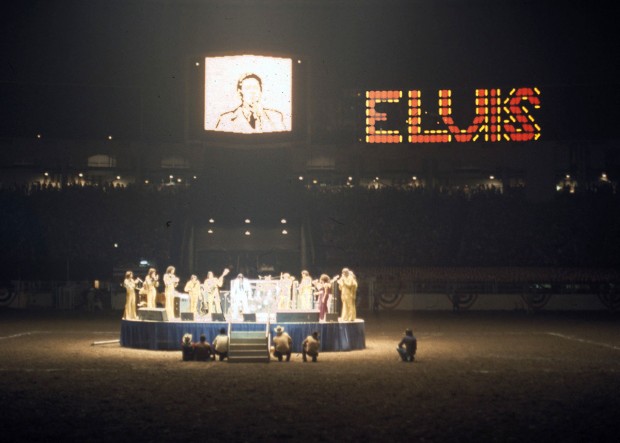 With his name lit up in lights, Elvis is rocking and rolling during a 1970 Astrodome performance. (Photo courtesy of Houston Livestock Show and Rodeo)

The Houston Livestock Association gave Elvis a gold Rolex for breaking attendance records at the Houston Astrodome in 1970. Elvis frequently wore the watch.

Katie Gonzales recalled many fond family memories of The King. “Elvis has been in all parts of my life - my dad even saw him at the ’dome. My grandmother loved him, and she and my mom set out to watch every movie complete with a homemade spreadsheet to track and rank. My boyfriend’s mother loved him as well and when it was time for her to pass, we started playing music and she left us listening to Elvis gospel.” 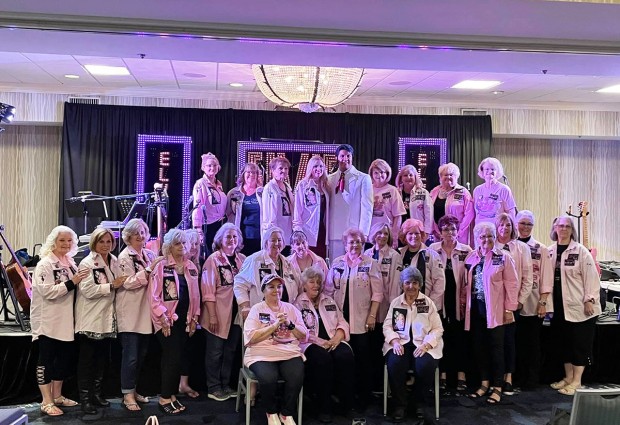 Members of the Elvis Fan Club Houston include the Pink Ladies who like to go on adventures. They are excited to see the new Elvis film this weekend.

The Elvis Presley Fan Club Houston Facebook Group honors and celebrates the legend of Elvis Presley. There are nearly 500 members.

Janice Gunnin Wilson, the group’s administrator, shared: “Some of the people in our group are the Pink Ladies. We like to go to events together and wear our pink shirts. This Saturday, we have almost an entire theater reserved to watch the Elvis movie together.” 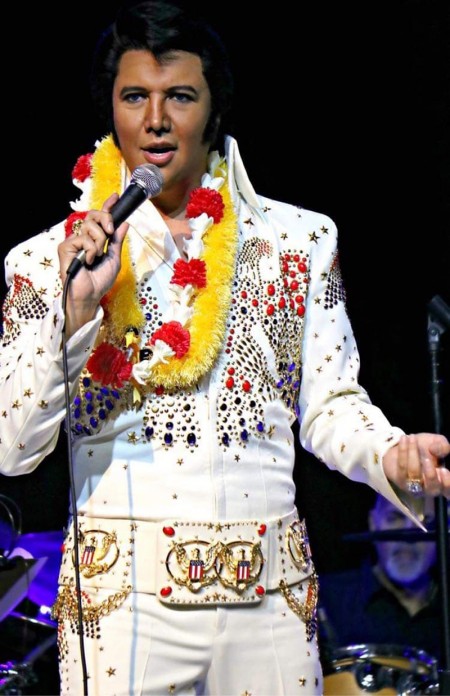 Vince King loves being an Elvis Tribute Artist and putting smiles on the faces of Elvis fans in Houston and beyond.

Eighteen years ago, Vince King was a rock musician. He entered an Elvis radio contest for fun and won. He had no idea that winning the contest would launch a new career for him.

“What I love about being an Elvis Tribute Artist,” Vince commented, “is all the feedback and real emotions I get. I am surprised by how many people, and such a wide range of ages, still love Elvis so much. Before I was a tribute artist it was all about me and my success. Now it is all about Elvis.”

Vince is looking forward to seeing the movie. “What I hear about the movie [no spoiler alerts, no worries!] is that it is beautiful and well done. The second trailer made me emotional. I believe the movie will shine the light on Elvis to the masses and not just the stereotypes.”

Put on your Blue Suede Shoes, grab some popcorn, and get ready to watch The King of Rock swing those hips. Screaming optional. 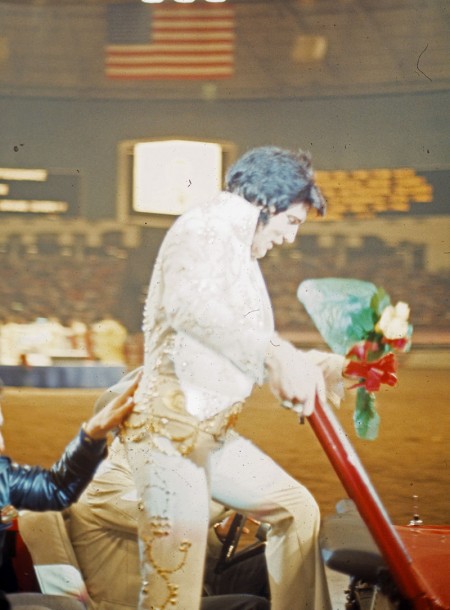 Elvis took the stage at HLSR in 1970 and 1974. (Photo courtesy of Houston Livestock Show and Rodeo)

If the new movie leaves you wanting more Elvis, you are in luck as The King Music Fest is taking place July 15-16 at the Hilton Houston NASA Clear Lake Hotel. Four Top Elvi (the plural for more than one Elvis) Tribute Artists will be Vince King, Nick Perkins, David Allen, and Moses Snow. The audience will get to experience Elvis from the ’50s to the Concert Years.

Watch the Elvis movie trailer here. Thank you, thank you very much.