Fired up with the Rainbow Fireballs 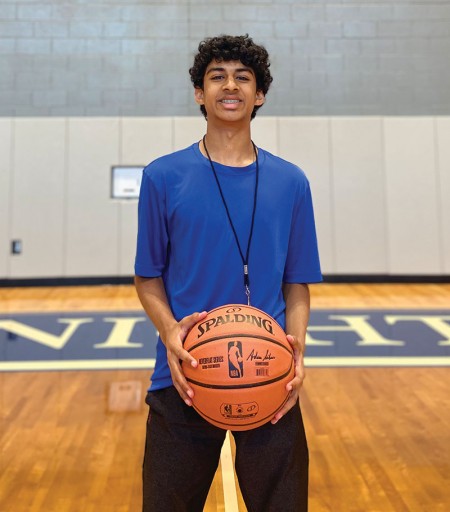 NOTHING BUT NET Avi Dubey, a rising junior at Memorial High School and Buzz summer intern, was once a camper at the Hoops School. This summer, he is sharing his knowledge with younger athletes at the same camp. (Photo: Anna Galan and Raigan Clay)

Not every teenager would be excited to spend an hour and a half with six first-grade girls with an endless supply of energy.

While many wake up on Monday morning with a negative attitude (and probably some groaning), I woke up on this particular Monday with a rush of joy, as my coaching job was scheduled for that night. The compounding suspense throughout the day only elevated my excitement for that night.

I typically arrive a little early to get some warm-up shots in with my team, the Rainbow Fireballs. We quickly got to our pre practice led by ex-WNBA player and head coach Heidi Horton, and we were off and running. For the last eight weeks, the Rainbow Fireballs had been attempting the behind-the-back dribble, and my gut told me that on that day, they were going to get it.

I was right. I couldn’t believe my eyes. A wave of triumph washed over me. When we started, some of the girls couldn’t even dribble with one hand. Now they could do one of the hardest dribble moves out there. The feeling of knowing I was behind their success warmed my heart, and the thought that I had made an impact on a different generation in the game I was so passionate for changed my outlook on sports as a whole.

That one moment catalyzed me to be more than just a skills trainer. I took it upon myself to get my own coaching job as a head coach of a seven-on-seven football team. Now the pressure is in my court, so to speak. It’s an experience that I’ve embraced, and I am hoping that my team can stay competitive. I hate to lose!

The biggest reward in coaching isn’t the money, or the feeling of winning, but what you truly learn from those you are teaching. It’s not often that we look to kids as young as six for valuable life lessons, but there is wisdom there that I would frankly hate to miss out on.

10:00 am to 4:00 pm
Location:
The Heritage Society
END_OF_DOCUMENT_TOKEN_TO_BE_REPLACED