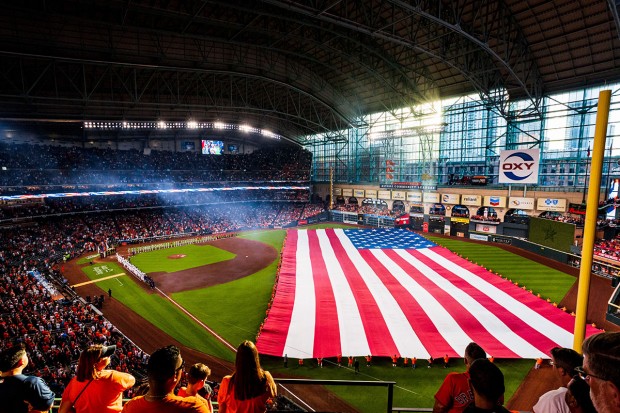 Astros fans take a moment to honor the American flag before the excitement of Opening Day. (Photo courtesy of the Houston Astros)

Did you know that June 14 is Flag Day? It’s a day for all Americans to celebrate and honor our country’s flag, the red, the white, and the blue, one of the most recognizable symbols of any country in the world.

June 14, 1777, is the day the Continental Congress approved the design of America’s first official national flag adorned with 13 small, white, five-pointed stars on a field of blue and 13 red and white stripes – one for each of the 13 colonies. There have been 27 different designs, many a result of the number of stars increasing when a new state entered the Union. The last update was in 1960 when Hawaii became a state and a 50th star was added.

In honor of the American flag, put your hand over your heart, feel your chest fill with pride, and prepare for a possible lump in your throat while admiring our flag and all for which it stands. Then smile as we look at the special ways the Star-Spangled banner is honored throughout our communities. 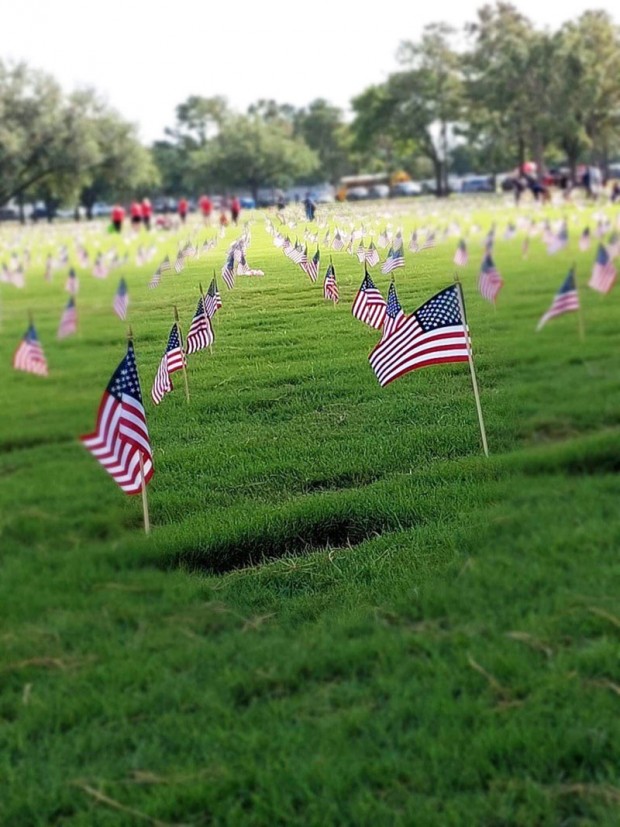 Flags placed on 11,000 graves by thousands of volunteers on Memorial Day at Houston National Cemetery.

Every year on the Saturday preceding Memorial Day, thousands of volunteers place flags upon every Houston National Cemetery gravesite – over 110,000 in all. Flags for Fallen Vets coordinates registration of individual and group volunteers for the project.

Jose added, “I’d like to highlight that each day presents one with the opportunity to place flags upon any site within the Houston National Cemetery.” All are welcome to visit the cemetery to pay their respects any day of the year. 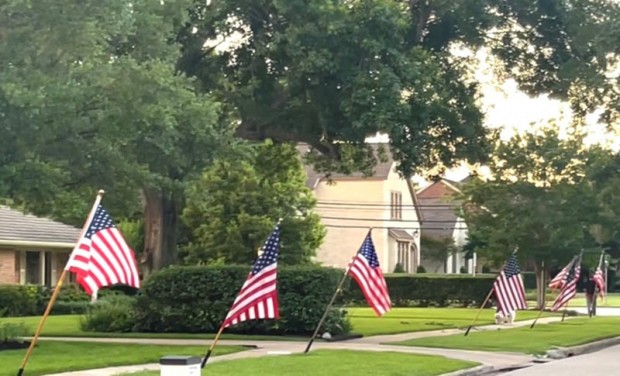 “Flags over Bellaire” is sponsored by the Bellaire/Southwest Houston Rotary Club and is managed through volunteer efforts who place large American flags in the yards of residences and businesses.

Thanks to local rotary clubs, residents of West University and Bellaire are fortunate to have American flags lining the streets of their neighborhoods on Presidents’ Day, Memorial Day, 4th of July, and Veterans Day.

On those special patriotic holidays, the West University Rotary Club flag program places about 1700 United States and Texas flags in the front lawns of West U residents. Neighbors can subscribe for flags on the West U Rotary website.

Ned Graber, a member of West U Rotary, shared, “Rotary Clubs throughout the country use flag subscription programs to raise money for their health, humanitarian, and youth service programs. The flag proceeds [from West U Rotary’s program] support Second Servings, Challenger Baseball, and The Institute of Hispanic Culture of Houston.”

“Flags over Bellaire” is sponsored by the Bellaire Southwest Houston Rotary Club and is managed through volunteers who place large American flags in the yards of residences and businesses. Funds raised assist local scholarships, Bellaire parks, The Shop With A Cop Holiday Program, and Bellaire FFA. Subscribe here. 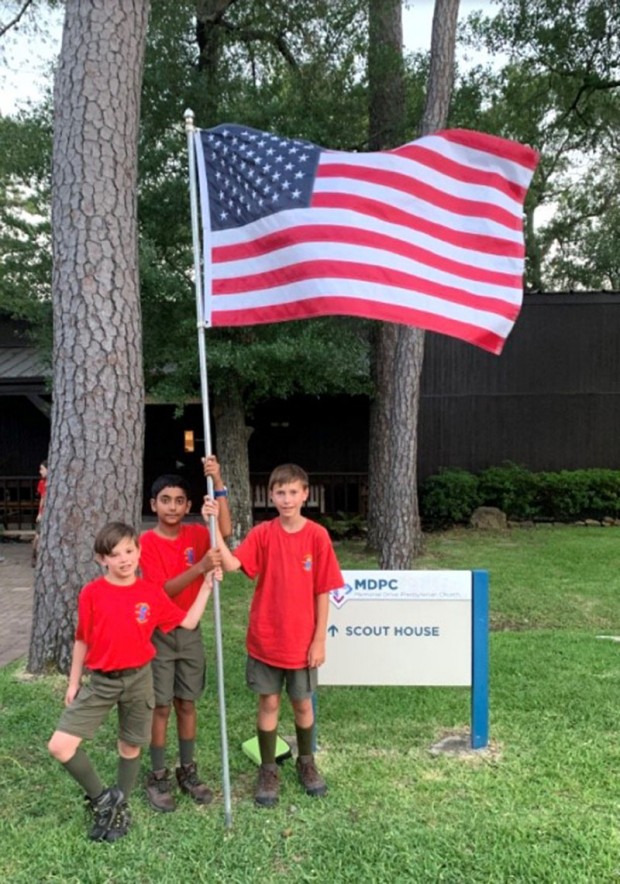 Troop member Jacques Gillespie remarked, “The flag symbolizes our freedom, and I am proud our troop puts flags in our neighborhood.”

The symbolism of the American flag has been a source of hope and bonded the United States together as a country, especially in times of great celebration or crisis. The same flag that flew over Pearl Harbor December 7, 1941, later being flown over the White House on August 14, 1945, when the Japanese surrendered after World War II; astronaut Neil Armstrong planting the American flag on the moon’s rocky surface during the first moon landing on July 29, 1969; on September 11, 2001, three New York City firefighters standing on the rubble of ground zero raising an American flag that survived the 9/11 World Trade Center attack.

When you see an American flag on June 14, take a moment to reflect on ways the flag has been a sense of pride and inspiration to you. Then the next 364 days, do the same. Because when you really think about it, shouldn’t every day be Flag Day? 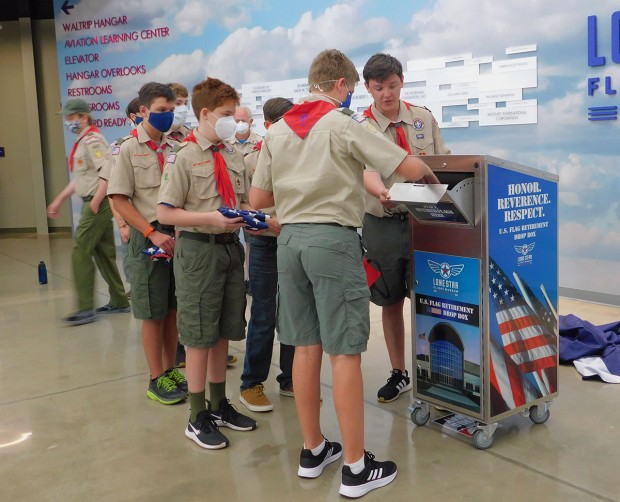 The Lone Star Museum has a flag depository thanks to Boy Scout Jacob Alford who designed it for his Eagle Scout project and then donated it to the museum.

When American flags become worn, tattered, and no longer fitting to display, they should be retired in a dignified way. An official flag location that accepts worn flags is The Lone Star Flight Museum. Boy Scout Jacob Alford designed a flag depository box for his Eagle Scout project and donated it to the museum. Any day during museum hours, the public can drop off worn flags for proper disposal. (Read more about it here.)

Another location to drop off flags is Kronberg's Flags, which has been operating in Bellaire for over 50 years.

A Gift for that Special Patriotic Person in your Life?
The public can purchase American flags that have flown over the United States Capitol. Requests are made through the offices of Members of Congress.

West University Rotary's American flags line the streets of West U during the Houston Marathon.

Old Glory flying high in the sky. The colors of the flag are symbolic - red represents hardiness and valor, white symbolizes purity and innocence, and blue represents vigilance, perseverance, and justice. 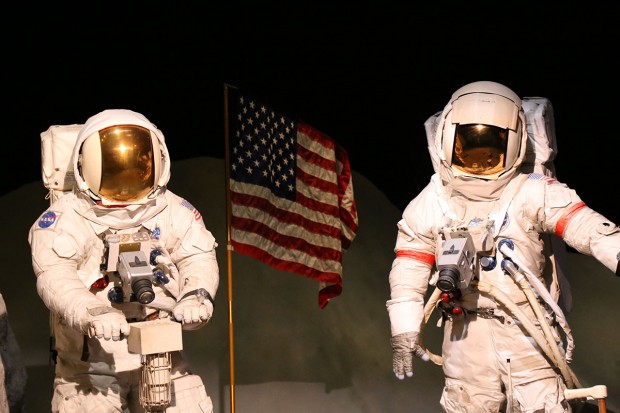 West U Elementary students and staff worked together one year to create an impressive human flag.