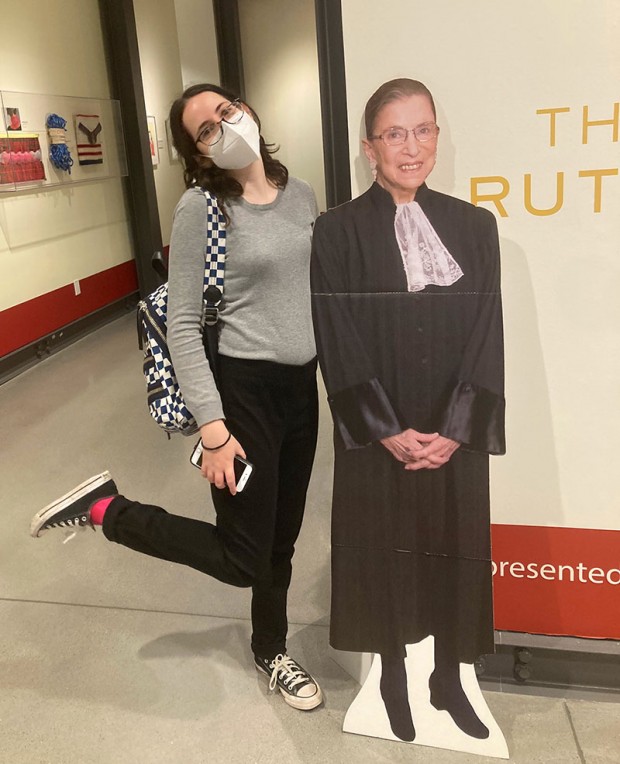 After eight decades of speaking for those without a voice and fighting to expand “We the People '' to every person in America, Ruth Bader Ginsburg solidified her legacy as a feminist icon. Now, ardent RBG fans can commemorate her tireless pursuits by exploring her exhibition. Open to the public until July 31, the “Notorious RBG: The Life and Times of Ruth Bader Ginsburg” exhibit at Holocaust Museum Houston is an immersive cultural experience to share with your family, friends, and fellow RBG fans.

Ruth Bader Ginsburg (1933-2020), the second woman to ever serve on the Supreme Court, became an even bigger pop cultural phenomenon than before when Shana Knizhnik, who at the time was a law student at New York University, created a Tumblr blog devoted to the justice in 2013. Knizhnik was inspired by the fierce dissenting opinion Justice Ginsburg delivered after SCOTUS struck down a significant portion of the 1965 Voting Rights Act, drawing a parallel to the famous rapper, Notorious B.I.G. Now her likeness along with the “Notorious RBG” moniker can be found on sweatshirts, coffee mugs, and stickers. 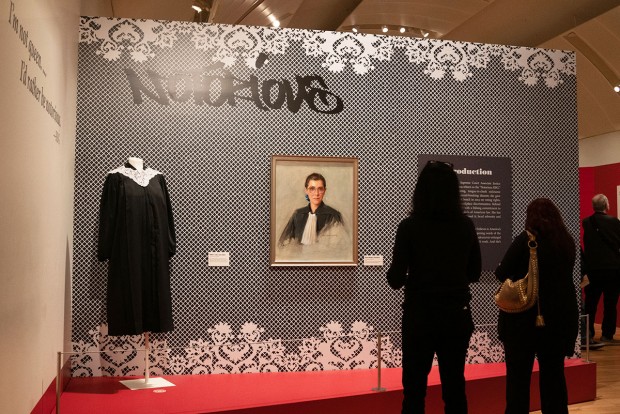 The exhibit, inspired by the eponymous novel written by Knizhnik and Irin Carmon, first trails through a striking series of RBG inspired jabots and prints, designed by artist Ari Richter. Throughout the exhibit the connection between Notorious B.I.G. and Bader Ginsburg is highlighted by his inspirational lyrics, including an empowering call to action to not “let ‘em hold you down, reach for the stars.” These words welcome a display dedicated to how much of an influence she will forever make on young women across the globe. 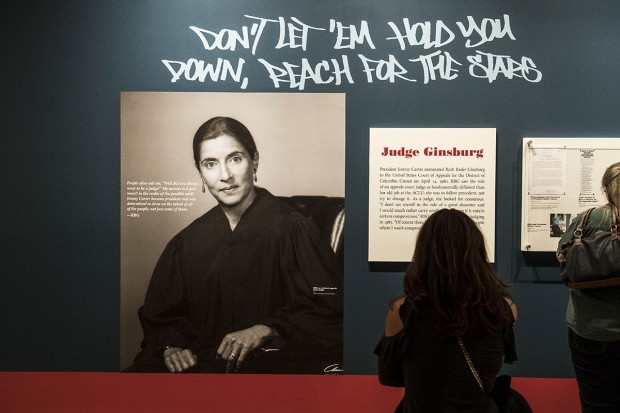 Lyrics by the Notorious B.I.G. are sprinkled throughout the exhibition to pay homage to the inspiration for Bader Ginsburg’s nickname. (Photo: Timothy Norris)

Live footage from Bader Ginsburg’s nomination as the second female Supreme Court Justice welcomes museumgoers to the role of RBG we are accustomed to. Near the end of the exhibit there is a replica of her desk, decorated to a tee with pens and sticky notes galore. This model is encompassed by Bader Ginsburg’s memories serving the Supreme Court, with a drawer that pulls out to reveal a small screen of footage from Bader Ginsburg’s life. There is also a photo wall garnished with pictures of Justice Bader Ginsburg and Judge Antonin Scalia sharing their passion for opera. While Scalia and Bader Ginsburg sat at polar opposite ends of the spectrum on the court, their mutual love for opera is evidence that lifelong connections can blossom amidst conflicting political beliefs. 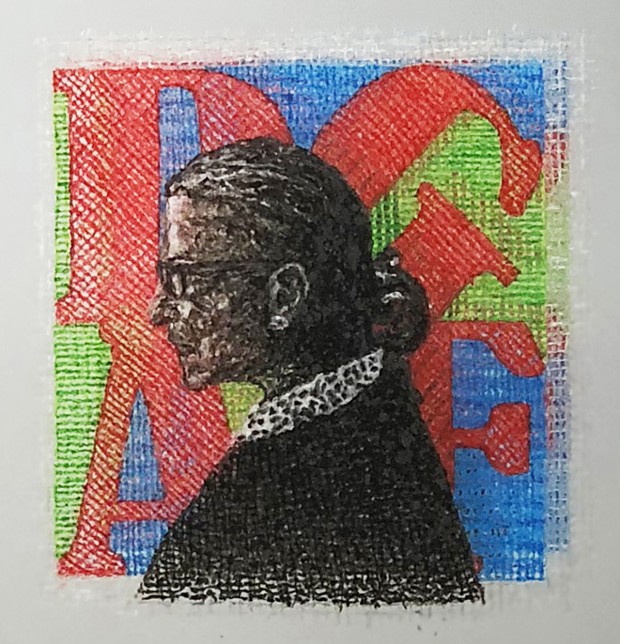 Artist Ari Richter collected and froze the skin he nervously chewed off of the inside of his cheek until he had enough to paint RBG’s profile. The letters in the background spell out “DGAF,” in reference to RBG’s searing dissents and the style was inspired by pop artist Robert Indiana’s LOVE statue.

Prior to her time on the bench, RBG made a name for herself during her undergraduate and law school years. The showroom dives into a look inside Bader Ginsburg’s youth through a series of yearbooks from Cornell, Columbia, Harvard, and one from her high school. In a 1957 Harvard Law Review group photo, it would be easy to miss Bader Ginsburg as she was relegated to the back, right corner. This slight foreshadowed the beginning years of her career as many law firms refused to hire a young woman, in spite of her making Law Review at Harvard and Columbia.

In spite of the sexism Bader Ginsburg faced, she managed to meet a like-minded companion during her undergraduate years who eventually became the greatest champion of her legal career. Her husband Marty Ginsburg worked alongside Bader Ginsburg from the day they met. When Marty was diagnosed with testicular cancer while they were in law school, Bader Ginsburg took on the bulk of his courseload in addition to her own, writing up his notes and essays based on his dictations.

The Ginsburgs’ partnership is lovingly emphasized in a replica of their kitchen complete with Marty’s whisk, mortar and pestle, and a love note he penned to Ruth days before his passing in 2010. In the margin of the note, viewers can see a loving correction left by Ruth in which she highlights that the couple had been married for nearly 60 years, which HMH CEO Dr. Kelly J. Zúñiga said was many visitors’ favorite artifact - including ours. It was truly heartwarming to be surrounded by tangible proof of a couple who lifted each other up throughout their lives and grew to become better individuals.

Visitors can even live out their Supreme Court dreams by traveling upstairs into a photo booth version of the court and trying on their own robe and jabot. Being a feminist trailblazer for 80 years is no small feat, and the “Notorious RBG: The Life and Times of Ruth Bader Ginsburg” exhibit demonstrates just how influential the notorious RBG was.