The Novelist Around the Corner

Writing a story close to home 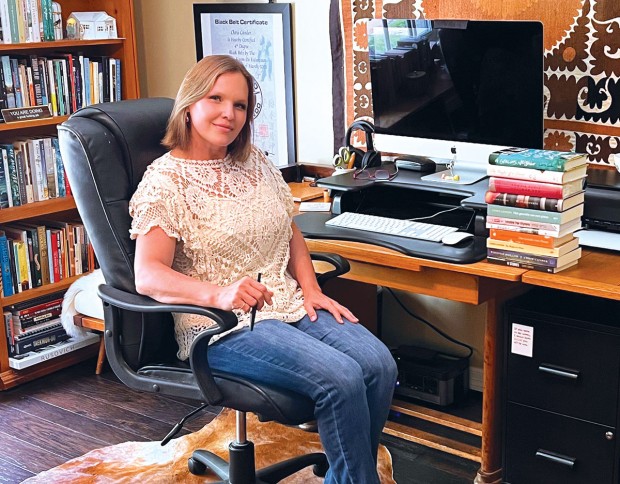 A GRACIOUS NEIGHBOR Local novelist Chris Cander has published four books written in her West U home office. Her newest, A Gracious Neighbor, is set in West U and releases this month.

It sounds like a bit of a stretch: A competitive bodybuilder with a fourth-degree black belt in Taekwondo becomes a novelist. But if you know longtime West U resident Chris Cander, you know it makes perfect sense.

“I was getting featured in health and fitness magazines,” Chris says of her five years as a bodybuilder, “and I wanted to create content for them.” She started with Oxygen magazine and eventually wrote more than 500 articles on lifestyle, cooking, health, and fitness for dozens of magazines.

After two babies – Sasha, now 20 and a junior at Wesleyan, and Josh, now a 16-year-old junior at Strake – the calling to write intensified. “I wanted to try writing a novel,” Chris says. But she worried about not having a formal education in creative writing. “Then I realized there were a lot of things I hadn’t been taught to do, but I figured out on my own…like running a house and raising children!” She wrote a manuscript and hired an agent. While that first go is still sitting in a drawer, it propelled Chris into a new career. Since then, she’s published 11 Stories (2013), Whisper Hollow (2015), The Weight of a Piano (2019), and, as of this month, A Gracious Neighbor.

As a young wife and mother, Chris wrote after her children went to bed. As their schedules evolved, Chris’ did as well. Then and now, she writes about a page a day.

Her latest book, A Gracious Neighbor, took a year to write and was the fastest one she’s completed (she worked on The Weight of a Piano for about three years). She started A Gracious Neighbor Feb. 20, 2020. Then everything began shutting down, and she found herself home, with a lot of quiet time. “There weren’t cars everywhere, and I loved sitting outside and writing,” Chris says. “That’s interesting, because this book is about our neighborhood, and I was sitting in it and was able to hear the ambient neighbor noises: somebody was playing a radio one day I had never noticed; there was a dog barking. I was sort of present in the story and in my own life at the same time.

“It was Sasha’s senior year of high school, and she was forced to be at home. So every day she would read what I had written. I think both my children appreciate the fact that I am creating.”

Chris says it took a while for them to understand what she did in her home office. “They’d look at me and think, ‘Yeah, you look available and I’m coming in,’ but now they know I actually do have a job with deadlines and can’t really be interrupted for one minute. It’s an ongoing process, but it’s better with a 20- and a 16-year-old than with a 4- and a 1-year-old!”

For Chris, and for her readers, the writing is transporting. “My favorite part is when something magical happens that I didn’t expect,” she says. “It’s hard to explain how it happens, but I’m just eternally grateful. It’s like I’m not straining in a bench press, the weight is magically lifted and lowered. Almost like I’m plopped down in another world. I notice all the details, I’m inhabiting the story.”

She hopes her readers feel something similar. “One of the reasons we read fiction is to imagine ourselves in situations,” she says. “I have to make them complex and juicy enough…it gets interesting when it gets complicated.”

There’s no lack of juiciness in A Gracious Neighbor, especially for Houstonians, who will be guessing who’s who in the story, which is set in West U. Chris describes the main character as “dumpy little Martha,” and her neighbor as “glamorous Minnie.” She says, “Martha is in this 1940 teardown, and Minnie’s in this gorgeous mansion next door. I put them in some uncomfortable situations to see what would happen, how they would react.”

But if you’re looking to pin Martha – or Minnie – down to someone local and real, don’t bother. “One of the things I love about Martha is that she is all of us,” Chris says, sharing that her sister, who lives in Bellville, thought she was Martha, as did another friend in Houston. “In some ways she’s based on me, she moved into West U the same year I did, but she’s too much of an amalgamation of stereotypes, things I’ve observed living here so long, to pull her apart. She’s everyone and no one.”

Whether or not you see yourself in one of Chris’ characters, you likely can see yourself in her world. Which is real, with kids and deadlines and, yes, Taekwondo and weightlifting. And it’s right around the corner.