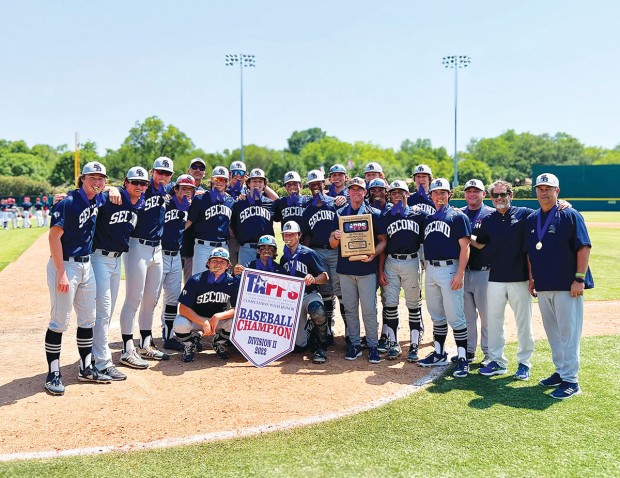 STATE CHAMPIONS The Second Baptist Eagles are the TAPPS Division II State Baseball Champions for the sixth time in school history. The Eagles won this year’s title with an 11-5 victory over The Brook Hill School in the state final.

“We knew going into the season we had a really good team and the ingredients to make a strong run at a state title,” said Eagles head baseball coach Rayner Noble. “Luke Pettitte and Leighton Reddy both had marvelous statistical years, while the rest of the supporting cast also had terrific seasons. There were basically no holes in the lineup and our pitching, defense, and hitting were especially strong in the playoffs.”

Along the way, the Eagles had to overcome the loss of star junior pitcher Ty Baker for about half the season due to an injury, which in some respects turned into a blessing in disguise for the team. “It helped us develop some much-needed pitching depth until Ty was able to rejoin us later in the season,” said Noble. For his part, Baker has committed to play baseball for Texas A&M.

In the state final victory over Brook Hill, Pettitte went 2-5 with a pair of doubles and was named the Player of the Game. In addition, Turner Murdock, Elijah Marrero, and Noah Weisser were named to the all-tournament team. As for Reddy, the senior catcher and UT Arlington signee led the team with a lofty .450 batting average. 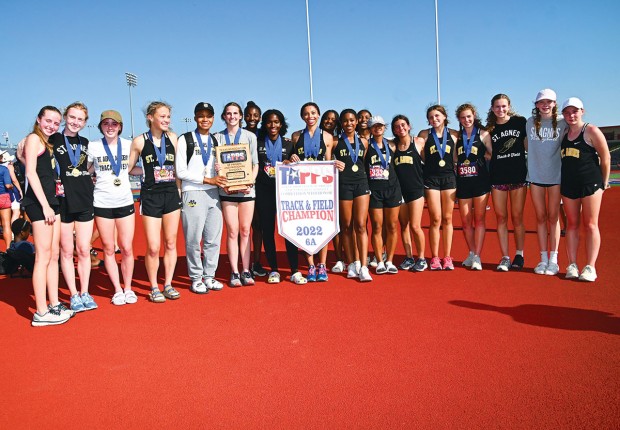 TRACK AND FIELD DYNASTY The St. Agnes Academy Tigers captured the TAPPS 6A State Track & Field for a remarkable sixth consecutive season. The Tigers won this year’s meet by a lofty 53-point margin.

For a remarkable sixth consecutive season, the St. Agnes Academy Tigers are the TAPPS 6A State Track & Field champions. The Tigers won this year’s title by an impressive 53-point margin at the state meet. “Every one of the state titles is different and special in its own way,” said Tigers head track and field coach Kristi Robbins. “We had tougher competition this year, so our girls were especially outstanding.”

The Tigers were notably dominant in the field events, where senior standout Faith Mitchell won gold in both the shot put and the discus. Mitchell, who will compete next season for Texas Tech University, set a TAPPS state record with a throw of 48 feet three and a half inches in the shot put. “Faith is definitely a special talent,” said Robbins. “She’s ranked number seven in the nation in the shot put and has won state every year she’s competed.”

Another multiple gold medal winner for St. Agnes was senior Allie Scott, who finished first in both the 100-meter hurdles and the 300-meter hurdles. Scott will run track for Baylor University next year. In addition, Tigers freshman Grace Sanders was the state champion in the pole vault while senior Anika Gonzales captured gold in the high jump.

“It is truly hard to believe that we’ve now won six state titles in a row,” added Robbins. “The girls that enter our track program every year are just an incredibly dedicated group of athletes. It’s just become a special type of culture. They want to run track and there’s strength in numbers. Plus, we have great assistant coaches that have been a big part of our success.” 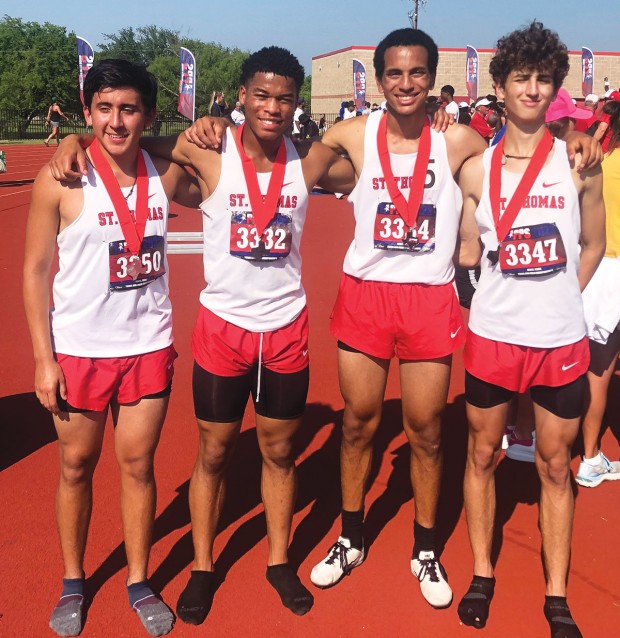 ON THE FAST TRACK The St. Thomas Eagles finished a strong second place at the TAPPS 6A State Track & Field Meet. Pictured (from left) are Joe Romero, Luke Anigbogu, Edward Bocock, and Oni Mouton. The Eagles foursome teamed up for a second-place finish in the mile relay.

The St. Thomas Eagles came up just short in its quest for a third consecutive state championship in track and field. The Eagles were a strong second at the TAPPS 6A state meet, finishing 15 points behind ultimate state champion Central Catholic.

“Our guys all performed great and did about as well as possible,” said Eagles head track and field coach Nathan Labus. “We just kind of ran out of events to make up ground with Central Catholic qualifying several more athletes to the state meet.”

The Eagles captured gold in the high jump with Shaffer Henderson taking first place while teammate Andre Meza added points with a third-place finish. In addition, Carrick Brogan of St. Thomas took home the bronze medal in the pole vault.

St. Thomas also scored valuable points in the relay events with the foursome of Preston Bowman, Johann Cardenas, Aaron Blackman, and Luke Anigbogu winning the silver medal in the four x 100-meter relay. Plus, Anigbogu then teamed with Onezieme Mouton, Joe Romero, and Edward Bocock for a second-place finish in the mile relay.

“I’m just really proud of how the guys have continued to commit themselves even when facing adversity,” added Labus.