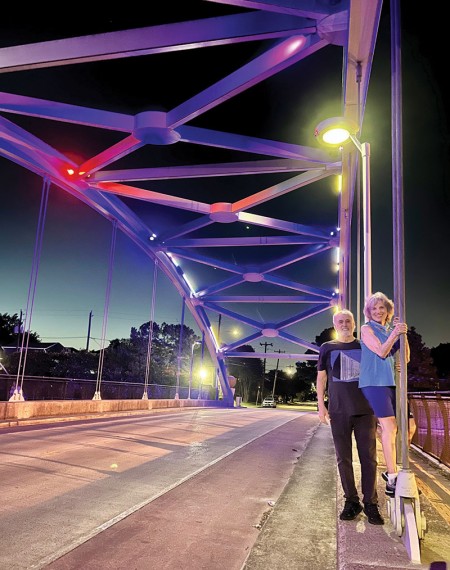 OVER THE RAINBOW Rey and Lorelei de la Reza take a walk across the US-59 bridges Rey's architecture firm designed.

Rainbows are weaving their way through Lorelei and Rey de la Reza’s life.

Like the rainbow lights illuminating the bridges over US-59 around South Shepherd – they’re a project designed by the firm Rey founded (and is now retired from), RDLR Architects.

Or the rainbow colors brightening the frames of scores of small square windows dotting the walls of the de la Reza’s three-story townhome in the Museum District.

Or the rainbow inside their refrigerator, where glass bottles line up by color – orange, green, yellow, violet – signaling the unique tastes of each of Lorelei’s Rainbow Smoothies, after-school favorites of her three grandchildren who live just around the corner.

All of it creates a colorful life, which is exactly what Lorelei hopes to do as she walks her three grandchildren home from school on the regular. 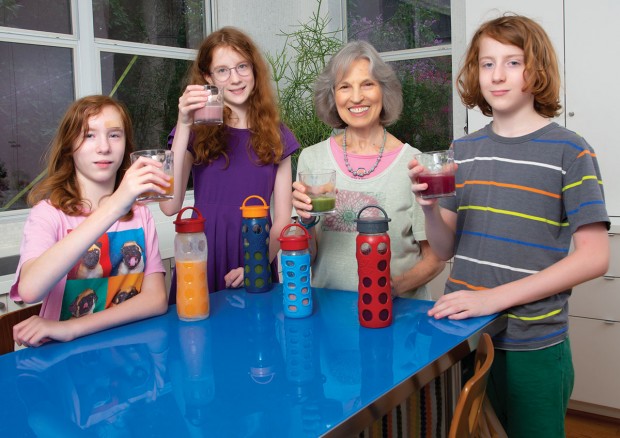 “You can see your surroundings better when you walk – when you drive it just doesn’t register,” says Lorelei, who used to teach mime at the Kinder High School for the Performing and Visual Arts. “That’s my goal walking them home, to get them to interact with nature and their surroundings, and to unwind after school.”

At least once a week during the school year, Lorelei waits outside the school for her grandchildren and escorts them home on foot. While Lorelei and her middle-school-aged grandchildren walk, Rey drives the kids’ heavy backpacks home, making the walk easier to manage.

Walking home, Lorelei says, gives her a chance to connect with her grandchildren and them a chance to connect with her and with each other. “After a day of being apart, it’s a time to stretch their legs and mentally transition from school to home,” she says. “A time to literally smell the flowers and appreciate the growth of the figs and peaches on the trees along our way. We’ll talk about what we’re seeing, the trees blooming and forming fruit. I even think we saw a pomegranate. It’s slowing down enough to look and see and appreciate.” 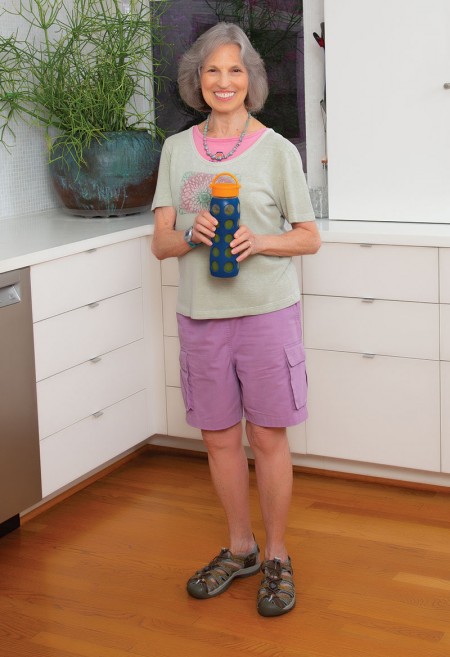 Also, the walks serve a purpose in teaching the children to pay attention to what’s going on around them. “In this electronic age, we’re going back to stop, look, and listen, what I call street smarts,” Lorelei says. “I know what direction I’m going by looking at the sun. Kids nowadays say, ‘Huh, what are you talking about?’ Or they’ll say, “How’d you know it was going to rain?’ Well, you look at the sky! That’s the danger when you just pop in a car. It’s a necessary life skill to be able to interact with your surroundings and not just keep your head down.”

Often, she and the kids will stop at a park. “They relax on the swings before we walk home,” she says. Rey is quick to add, referring to days off of school: “We also take them on one-on-one adventures, like climbing the ‘mountains’ in the Museum District,” meaning the hills at Centennial Gardens and Miller Outdoor Theatre.

Rainbow Smoothies are an after-school treat to be enjoyed either at the park or at home. “The children love all the flavors,” Lorelei, a “compassionate vegan” of 33 years, says of her beloved concoctions. “I’ve always enjoyed the beauty of the rainbow. As long as you put in things you like [in the smoothies], you’ll like it. Proportions are not critical.”

But color is. “Aesthetics are a big part of my life,” Rey says. “Lorelei prepares food in a very aesthetic way. I call it Lorelei’s edible art. It’s nothing special, but she arranges it so beautifully. How could I not eat this stuff?”

The de la Rezas add more color to their lives by walking, which has become a lifestyle. “We’ve gone from going places by car to getting there on foot,” Rey says.

Lorelei adds, “We have time now, so we walk to accomplish errands like the post office, various grocery stores – picture Rey carrying home a watermelon doing bicep curls! – dentist appointments, restaurants. We walk about a marathon a week. Walking the kids home is another activity we can do on foot.”

“Whatever we can walk to, we do it,” Rey says. “It’s five miles roundtrip to the nearby gym, where we work out and shoot hoops.” That’s a quiet reference to Lorelei’s days as a basketball player in the Senior Olympics. “Basically, my kids left home, and I cried, and they said, ‘Get a life!’ So I started playing basketball,” Lorelei explains, referring to her three grown children. “I never expected to start playing basketball as a grandmother.” 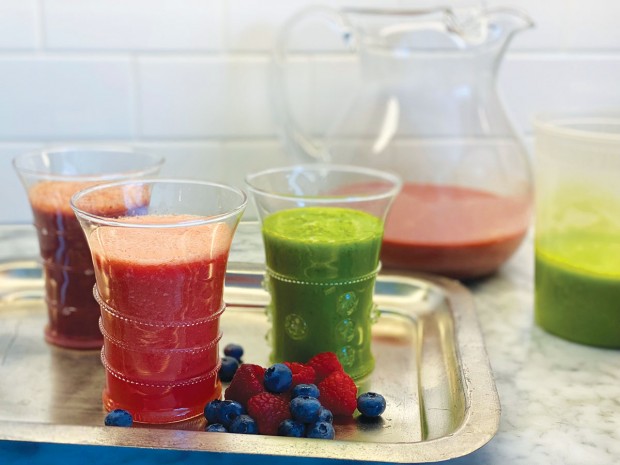 At home, Lorelei and Rey’s grandchildren have almost as much to notice as they do on their walks. An animal lover, Lorelei has populated her home with tiny plastic and rubber toy creatures. There’s a “grasshopper” perching in a plant on the kitchen counter, magnetic “ants” crawling up the walls of an elevator shaft, a “frog” peeking over the edge of a planter.

“I get bitten, but Lorelei talks to [insects] and they never bite her,” Rey says. “If there’s a caterpillar on the wall, she’ll say, ‘Come on, come down a little farther so I can take you outside.’ And she does.”

• Use organic ingredients when available.

• Blend all the ingredients together on high speed in a 6-cup blender.

• Exact proportions are not critical. If you like the ingredients you are putting into the smoothie, you will like the smoothie.

• Bananas can be frozen when ripe. Cut them and put them into ice cube tray compartments for freezing, then store the frozen chunks in a freezer bag.

If the smoothie is too thick, add orange juice to thin it.

Carrot Cake Smoothie
It tastes like carrot cake, but you don’t have to turn on the oven.

Brown Smoothie
"When you mix colors, you get mud!" Lorelei says.