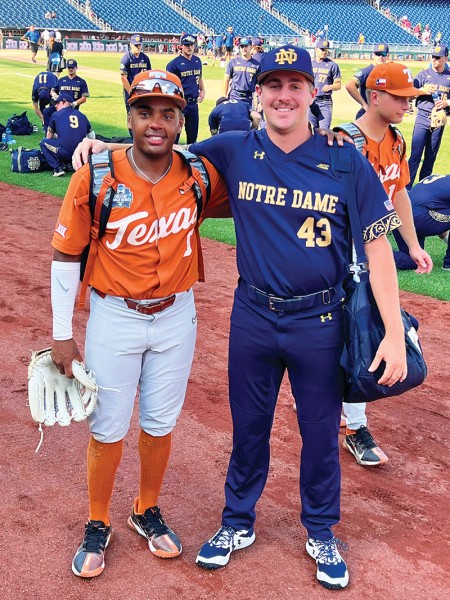 COLLEGIATE CRUSADERS It was a special reunion for former Strake Jesuit Crusaders Dylan Campbell (left) and Will Mercer (right) when the Texas Longhorns faced Notre Dame at the College Baseball World Series. Campbell graduated in 2020 and Mercer graduated in 2018.

It was a one-of-a-kind reunion for a pair of former Strake Jesuit baseball players when the Texas Longhorns faced Notre Dame in the opening game of the College Baseball World Series. On the Texas side, the Longhorns lineup included starting shortstop and Class of 2020 Strake Jesuit graduate Dylan Campbell, while Notre Dame pitcher Will Mercer graduated from Strake Jesuit in 2018.

“It was really great to see two of our former players at that level especially in the College World Series,” said Strake Jesuit baseball coach Raul Garcia-Rameau. “It also says a lot of good things about our baseball program here at Strake Jesuit. Both those guys were tremendous high school players and they have continued that type of success in college.”

The Crusaders duo played together at Strake Jesuit for one season when Campbell was a sophomore and Mercer a senior. “I remember Will as one of our top guys on the mound who was a great competitor with a real mindset to win,” said Campbell. “Our paths separated for three or four years and now to be playing each other in the College World Series is pretty special.”

“Even though we only played together for one year at Strake Jesuit, I’ve known Dylan a long time,” said Mercer. “He played on my friend’s little brother’s traveling team and it’s awesome to now see him playing on the biggest stage in college baseball. For us to be there at the same time representing Strake Jesuit was especially cool.”

“When I look back on it, I remember all the great times I had at Strake Jesuit,” added Mercer. “I’m still friends with most of the guys I played with back then and I’ll never forget our playoff run my sophomore season. Coach Garcia- Rameau continues to do an excellent job with the program.”

As for the reunion in Omaha against his former high school teammate, Mercer’s Fighting Irish got the better of Texas with Notre Dame defeating the Longhorns 7-3. While Mercer didn’t pitch in that game, he did have an outstanding outing later in the World Series with three and two-thirds innings of scoreless relief in an elimination game against Texas A&M. The game turned out to be Mercer’s final pitching outing as a senior; however, he will be back on the mound for Notre Dame next season while pursuing his Master’s in Business Analytics with a concentration in Sports Analytics.

Campbell will return to Texas for his junior season as one of the heroes who helped the Longhorns get to the College World Series. Against East Carolina in a super-regional elimination game, Campbell connected on an eighth-inning game-tying home run, and then in the ninth inning he had a walk-off run-scoring single to give the Longhorns a dramatic 9-8 victory. “It was a hard-fought game with a lot of emotions,” said Campbell. “We knew we were never out of it even when trailing 7-2 in the seventh inning. We kept fighting and were able to pull it off.” Texas would then beat East Carolina again a night later to earn its College World Series berth.

Next season, Campbell and Mercer both expect big things for their respective teams, although the odds of them meeting up again in the College World Series seems somewhat remote. Regardless, it’s a sure bet that the players are an immense source of pride back home for the entire Strake Jesuit community. 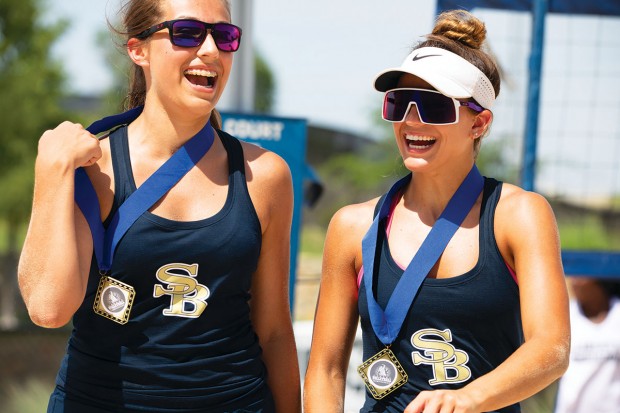 The high school volleyball season doesn’t tip off until later this month, but that didn’t keep the Second Baptist duo of sophomore Madi Hobbs and junior Riley Tackett from already winning a state title in volleyball. Hobbs and Tackett went undefeated while finishing first in this summer’s TAPPS Sand Volleyball State Tournament at the Game On Sports Complex in Fort Worth.

“It was so exciting,” said Tackett. “Many of the other schools sent several teams to the state tournament, but Madi and I were the only team representing Second Baptist. I’ve come close to winning state in other sports, but this was my first state championship.”

While winning the state tournament, the Second Baptist duo beat out a field of 32 teams, while going a perfect 6-0 in their matches to capture the state title. “The great thing about sand volleyball is the relationship with your partner. There’s excellent communication in a two-on-two game and you’re involved in every rally,” added Tackett.