And moments between the lines 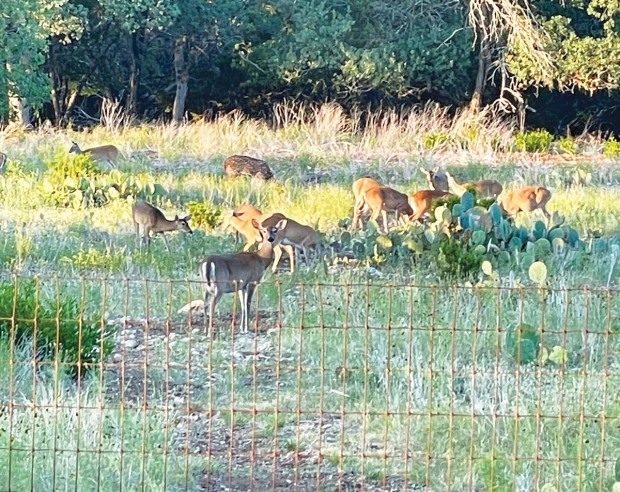 CONTEMPLATIONS FROM A QUIET DECK Cindy Gabriel feeds the deer in Hunt, Texas, and reflects on reality.

It’s my last morning on this deck in Hunt, Texas, a home away from home, left by my father. A herd of deer look at me with hungry eyes. They’ve stopped hiding when they see me coming with the biggest bucket of pellets I can muscle.

For the last 10 days I have had no job but to feed the deer, birds, and squirrels. The locals say the drought is bringing them out in full force. In between I write, then meet via Zoom with other writers from around the country, sharing life in line and verse, back and forth through smiles and tears. It’s becoming an annual event.

For me, the writing for the day happens the first three hours of the morning. It will be 100 degrees by noon, and yet, this porch feels like a breezy 65 at 8 a.m. It’s my one last time to sit in this symphony of birds, this sanctuary of breeze and trees for a while.

There was a one-day break in the middle of the course. Time to drive an hour down the road to Leakey, where my daughter Julia and husband Morgan live with their two boys, too young to watch the news. They don’t know what happened down the road in Uvalde, 36 minutes away. It was time for a big group hug.

Uvalde is where they buy their groceries, get Covid tested and antibiotics for the boys’ sniffles. Julia, who doesn’t usually prioritize the news, was the first to report. “Pray for Uvalde” she texted, with a link to the horror.

The drive between Hunt and Leakey is one of the most beautiful in Texas, mostly out of cellphone range. Getting lost is not an option. I’m always relieved when I see signs that point ahead to Leakey. In the past, I was oblivious to the fact that the word Uvalde sat under Leakey on the same sign. The sign that once relieved me, now wrenches my gut.

And yet, life somehow insists on showing its other side in the preschooler giggles and tumbles of two brothers in pajamas, before good-night kisses. Two boys less than two years apart, already deeply inseparable. No talk of Uvalde. The words, for now, were spent.

But the drought, that’s another thing. Julia, my millennial daughter, watches the sky like a farm woman from the ’50s, when a series of drought years combined for the worst in Texas history. “The real old timers of the town are talking about it,” she said. In other words, people my age, I thought.

She tried to show me how low the water level was at the usual drop-off spot for tubers. As we were driving past it, all we saw was rock. “Wait, where is it?” The trickle that was there yesterday had disappeared overnight. “Well, at least I’m not worried about nuclear war, at the moment,” she shrugged. The invasion of Ukraine seems long ago. Julia now worries about her own family running out of tap water.

As I think of this now, back on the deck, in Hunt, it’s about 9:30 a.m. The birds have stopped chirping and one small deer gathers the last breakfast pellets. The sun beaming on the other half of the porch is signaling that it’s time to face the world. Back to Houston, with Annie-the-dog, and my laptop.

Inside my laptop is another world, my early childhood in Rosenberg, Texas. For years, I have Googled and wondered if there was any evidence that our family’s weekly newspaper, the Ft. Bend Reporter, even existed. The George Memorial Library in Richmond didn’t have it, but helpful staff found it, not digitized, but actual copies, at the Dolph Briscoe Center for American History on the UT campus in Austin.

The Holy Grail of my earliest days had been there, all of these years, meticulously stacked, waiting for me to find them. For two days, I turned pages and took pictures. Some pages were still joined at the top corner. They had not been turned before. I’ve started with the years between 1956 and ’58. The stories invoke the feeling that life is swirling in variations of the same theme.

The polio vaccine was front-page news week after week, with pictures of children, lining up for their arm pricks. The March of Dimes volunteer who collected the most for the cause got her picture in the newspaper.

The Russians took the lead in the space race, by launching Sputnik, the first artificial satellite to circle earth, while leader Nikita Khrushchev scoffed at democracy.

The Civil Rights Movement was coming. The Ft. Bend Reporter editorialized about the need for a local “Negro” pool. Later a group of “Latin” residents approached City Hall, demanding that the Rosenberg public pool be integrated. The Reporter wrote: Integrate the pool or close it.

On July 6, 1956, this was the front-page headline: “Texans More Concerned About Water, than about Politicians and Cohorts.” The article was all about the worst drought in Texas history.

Despite familiar themes, things somehow felt more hopeful, as if we could all pull together for better days to come. It didn’t hurt that they only read about the problems once a week in the local paper.

I hope the deer in Hunt can find food while I’m gone.