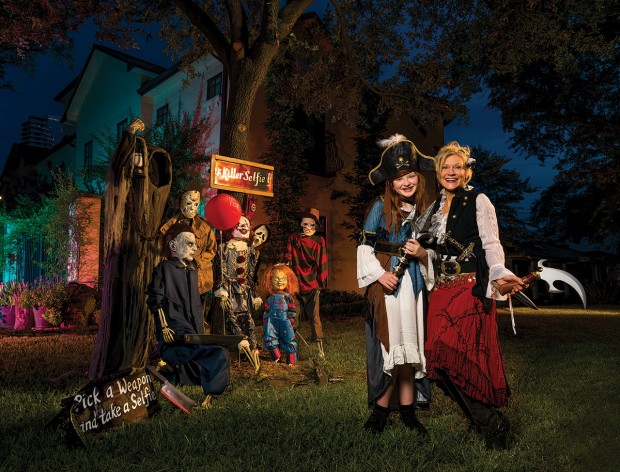 CREATURE FEATURE Emerson Beck and Mia Parker in front of a popular scene, where passersby can take “killer selfies” with their favorite horror-movie characters. (Photo: hartphoto.com)

There is a house in the Highland Village neighborhood that, eleven months out of the year, is much like its neighbors: a pretty and well-kept house surrounded by flower beds and shaded by live oaks.

But on October 1st, a pirate skeleton, mouth agape in a skeleton grin, appears somewhere in the yard, sometimes on the roof of the house’s entry.  He stands behind an ornate wooden ship wheel. A sign over his head reads, “Arrgh You Ready for Halloween?”

Halloween season at the Parkers’ house has begun. 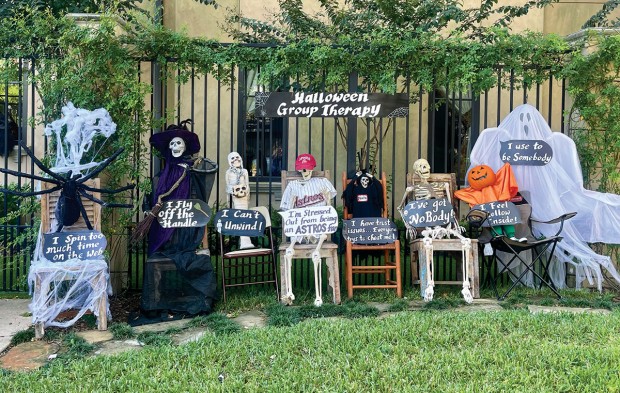 FUNNY BONES Mia’s scenes often include funny signs, like the group therapy session. She makes her decorations herself, largely out of “junk” she finds around the neighborhood or at Goodwill Outlet stores.

Almost every day through the month of October, something new will appear in the yard. Although these scenes change every year, they have in the past included Pennywise, the clown from the movie It, complete with his signature red balloon, peeking out from the storm drain on the corner; a skeleton scarecrow standing on his head; a row of skeletons in yoga clothes on yoga mats, all in warrior 2 pose; a life-sized mermaid, a skeleton with a glittery tail and matching bathing suit, a crown atop her blonde wig, false eyelashes and lipstick, lounging in a planter; Gollum, from Lord of the Rings, hoarding his “precious,” which was a roll of toilet paper during the height of the Covid shutdown.

Freddy Krueger, the monster from the Nightmare on Elm Street movies, appeared one October day, on one knee, proposing to one of the mermaid skeletons. A nearby sign read, “The Girl of My Dreams.”

Not everyone did, but that’s okay with Mia Parker, who makes all the scenes herself. 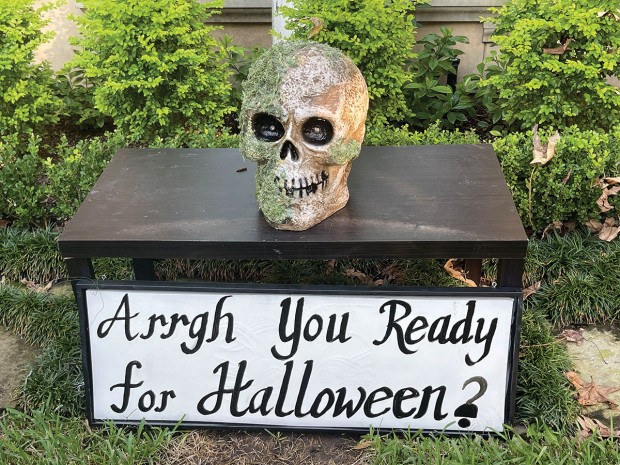 The pirate skeleton asks “Arrgh You Ready for Halloween?” each October.

One of her favorite installations last year was a skeleton wearing an undershirt, boxers, slippers, and reading glasses standing at an open refrigerator – a real refrigerator, by the way – full of nothing but bright yellow bottles of mustard. According to a sign at his feet, he’s saying, “Honey, where’s the mustard?” Inside the refrigerator door is written, “Male Blindness …”

The individual scenes themselves also change over the days. Last year, a skeleton appeared walking his six skeleton dachshunds. The first day, the dachshunds were well-behaved, all in an orderly line. Then, they chased a skeleton cat up a tree. Eventually, one of them lifted his leg on the Parkers’ neighbor’s “curb your dog” sign.

One of the most popular from last year was several characters sitting in a group-therapy session. Each held a sign. The witch’s said, “I fly off the handle,” a ghost’s “I used to be somebody,” a Jack O’ Lantern complained, “I feel hollow inside,” and, perhaps the crowd favorite, a skeleton wearing an Astros cap and shirt had a sign that read, “I’m stressed out from being an Astros fan.” 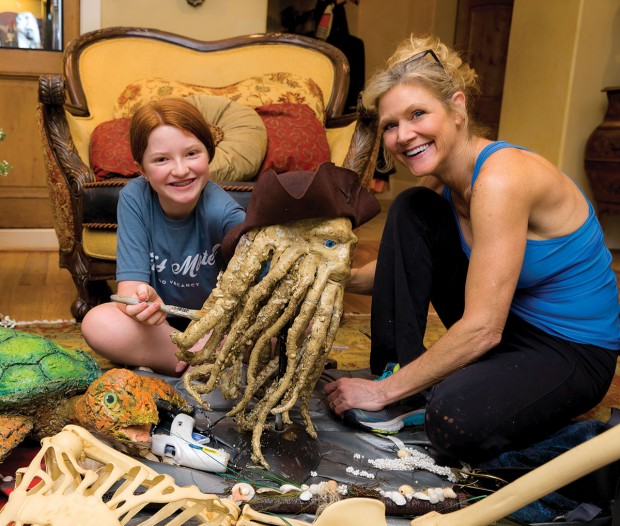 SHIVER ME TIMBERS Mia Parker’s creative Halloween scenes always make a splash. She has made new connections because of her Halloween decorations, such as with neighbor Emerson Beck. Emerson, now 12, left a handwritten note in Mia’s mailbox last year, asking if she could help with the decorations. Here, Emerson and Mia are working on a new character for this Halloween, the pirate Davy Jones. (Photo: hartphoto.com)

One thing that might not be apparent, because the scenes are so well-done and detailed, is that they are not store-bought. By and large, Mia makes them herself. And to challenge herself further, she makes them largely out of, well, junk. She looks for “curb alerts,” when people post on Facebook Marketplace or Nextdoor that they are putting stuff out for bulk pick-up in case anyone wants any of it.

Mia also goes to Goodwill Outlet stores. “Not regular Goodwill stores,” she clarifies. “These are the Goodwill outlets, the things that didn’t sell at their regular stores.” She’s also been known to poke around in dumpsters at construction sites. “I use things like bits of PVC pipe that no one else has any use for,” she says.

In fact, if something she gets seems too nice, like someone might be able to use that piece of furniture or wear those clothes, she will often give them away again rather than use them for her Halloween decorations.

But glittery prom dresses from the ’80s – “No one should wear those,” says Mia – become the tails of her mermaid skeletons. Those skeletons started as regular plastic skeletons, by the way, but Mia converted their legs into fishtails. A jacket with a double row of metal buttons has its sleeves cut off and becomes a pirate’s vest. Clear glass Christmas tree balls become the bubbles in a tub where a mother skeleton bathes her baby. Plastic toy chains are coated in glue and tossed in plastic bags filled with coffee grounds, “like Shake ’n Bake,” says Mia, so that they look like real rusted metal chains. 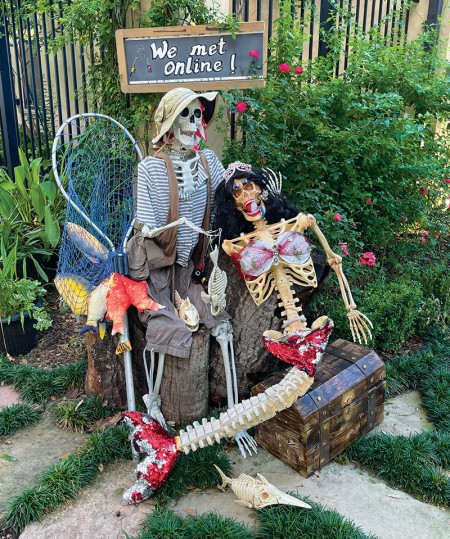 The skeleton couple who “met online”.

That ship wheel? It had been the top of a glass table that was missing its glass. Its handles are pieces from an old poster bed. (Mia owns power tools.)

Some of the things she makes look like they are made out of wood, but they are really made out of insulation board. Built, carved, sanded, painted, and weathered, they look like wood or metal or, really, anything Mia wants them to look like.This year, she is using another type of insulation, a kind of foam spray meant for gaps and cracks called Great Stuff, to make very realistic-looking coral. She also used it to make the tentacle beard of a new character, the pirate Davy Jones. Like the character from the Pirates of the Caribbean movies, this one has octopus tentacles as his beard, the suckers of which are Cheerios in Mia’s version. Where other people might take a book or a laptop, maybe a needlework or knitting project in their carry-ons, Mia took this somewhat realistic and definitely disturbing life-sized head through airport security when she flew to Colorado recently. (TSA didn’t bat an eye, she reports.)

To challenge herself even further, Mia doesn’t usually start working on her Halloween scenes in earnest until October – and then she tries to put a new one out every day. Long-time friend of the Parkers, Mike Leach, the head football coach for Mississippi State, says he thinks Mia should put out her scenes year-round, with a different theme every month. Mike has a well-known interest in pirates himself (his memoir is called Swing Your Sword), and this year, Mia is creating a Mike Leach pirate character to join her crew.

Mia has digital photo albums and Pinterest boards (“I shouldn’t be allowed on Pinterest,” she jokes), full of reference images and inspiration. She says she never runs out of ideas and, indeed, has several years’ worth. She recently found a child’s violin in a curb alert and is thinking about some day putting a Fiddler on the Roof skeleton on her roof. 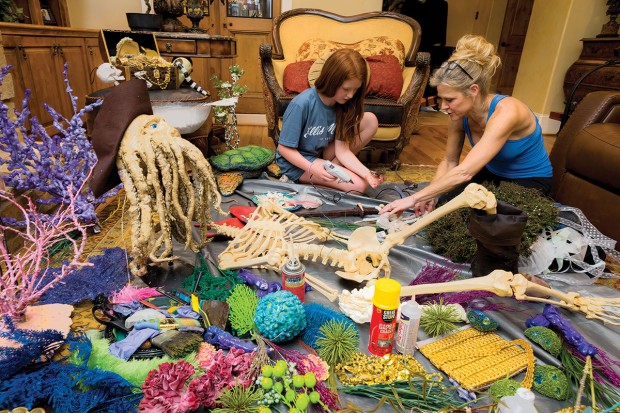 FANGS FOR THE MEMORIES “Our house has a heartbeat of its own,” Mia says. The Parkers’ home bustles with activity, humor, creativity, love, and friendship all year long. In October, Mia’s Halloween decorations bring entertainment to the neighborhood. Mia and neighbor Emerson work together to craft colorful items for detailed scenes. (Photo: hartphoto.com)

Sometimes Mia works on her Halloween things in her garage, but often she throws a tarp down in her den and “tootles on my junk” while watching TV. When someone, like her young grandchildren, come over, she can bundle up the tarp “like The Cat in the Hat,” she says.

She resists turning one of her bedrooms into a workspace because she wants to leave it available if friends and family want or need to stay. “I don’t need to know the why,” she says of her frequent guests. Mia has four grown children, her husband Gardner has three, and the Parkers have five grandchildren between them. They also have what Mia calls their three “bonus children,” kids now grown, who, for various reasons, came to live with the Parkers when they were teenagers and remain part of the family.

One young friend, who tragically died recently, lived with the Parkers while she received treatment from MD Anderson. Another, along with her little dog, came to live with the Parkers during Covid rather than live alone and isolated. Her shih tzu, named Dolly, still comes over two or three times a week for playdates with the Parkers’ dogs, Teddy, a charming Pomeranian (“He’s such a player,” says Mia), Bitsy, a Maltese, and Mia’s daughter Emily’s pit bull, Hazel. Little Bitsy is the pack leader, and Dolly and Hazel are best friends.

“Our house has a heartbeat of its own,” says Mia. 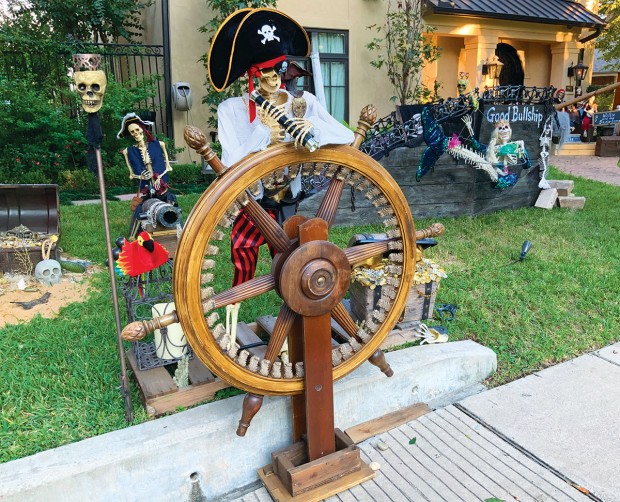 The pirate wheel Mia made out of pieces of an old table and an old bed.

And she has met people because of her Halloween decorations as well. Last year, she met her neighbors, the Becks, when their daughter Emerson, now 12, slipped a handwritten note in Mia’s mailbox, asking if she could help with the decorations. She could. Emerson especially likes manning the glue gun, to encrust, for example, Davy Jones’s clothes with seashells and barnacles. This year, her younger sister Lily may join her.

For the grand finale on Halloween itself, Mia puts out her large pirate ship and a pirate bar, both of which she, of course, made herself. Gardner hands out candy, lots of candy.

“Everyone should have a hobby like Mia’s, one that makes them happy and lets them use all their God-given talents,” says Gardner. “Mia’s so good at it and so creative, and she enjoys making other people happy.”