Coming back from surgery in a big way 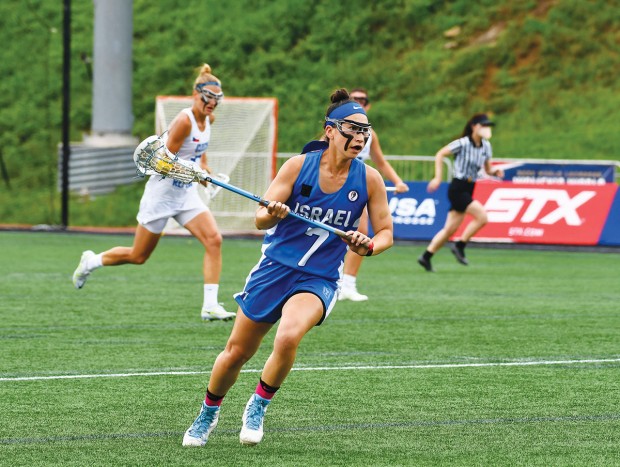 There was a one-in-a-million chance that Eden Epner would play lacrosse at the world level.

That’s what her ophthalmologist mom Linda Epner said, citing not only the sheer odds of her daughter reaching such heights in her favorite sport, but also some special challenges that made the task seem impossible.

Eden is a busy fourth-year medical student at McGovern Medical School at UT Health Houston. She’s prepping for a wedding this winter, when she’ll marry fellow med student John Bruhn. Together they are applying for a couple’s match – she for a residency in orthopedic surgery, he for one in emergency medicine – and they’ll find out in March where their next chapter will take them. Eden also recently underwent major ankle surgery from an injury she sustained over four years of playing lacrosse at Johns Hopkins University. The doctors said she probably wouldn’t play lacrosse again.

But Eden Epner was one-in-a-million. 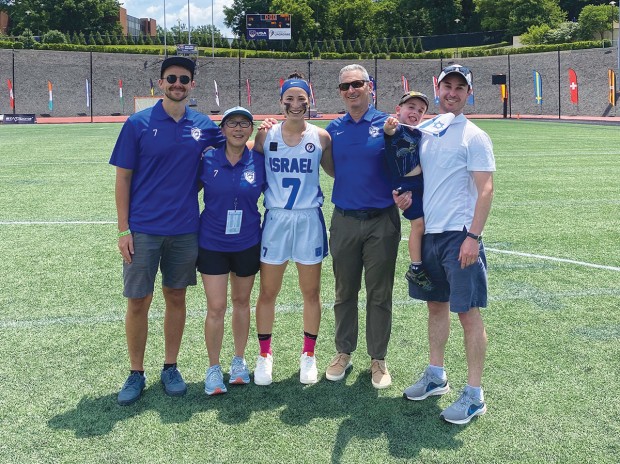 “I didn’t even know what lacrosse was until I got to St. John’s [School] in seventh grade,” Eden says. “I had never seen a stick or even heard of the sport.” Still, she started playing. And she got hooked.

“I credit the initial spark, and actually a lot of how my life has turned out, with Angie Kensinger,” Eden says of the beloved SJS varsity women’s lacrosse coach who passed away in 2019. “She recognized in middle school that I was sort of an athlete, and she let me play whatever sports I wanted to and also recognized, ‘Hey, this kid might be good at lacrosse.’” 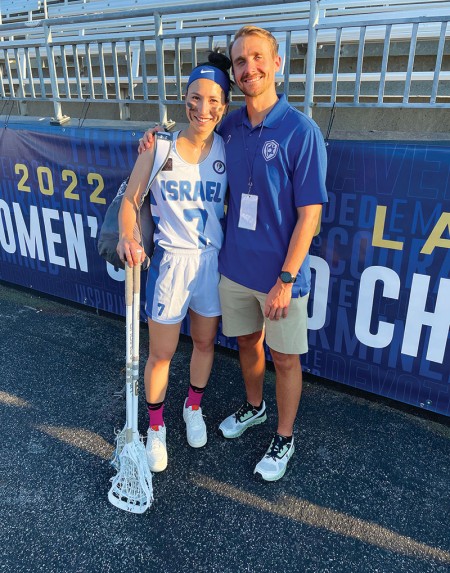 Eden fell in love with the sport and went on to play in college. “Back in 2016, when I was still at Hopkins playing, I got an email from these national coaches in Israel saying, ‘Hey, we noticed you.’ Basically, they had stalked the college lacrosse rosters and figured out I was Jewish playing Division 1 lacrosse, and they asked me to come try out.” Eden not only tried out, she spent an entire summer training and playing in Israel and also coaching younger players.

“Fast-forward to last year,” Eden says. “They reached back out and asked me to try out for the World Championship.” Because lacrosse is a relatively new sport in Israel, the team is comprised mostly of young, Jewish American players. Eventually, the team will be comprised of all Israeli players.

Eden says she told the coaches, “No way. I would love to, but this is crazy. I’m in med school, I have this big ankle surgery.” This was two years ago, when Eden was a second-year medical student suffering from serious ankle pain. She was about to undergo major surgery that many doctors say “almost never works,” according to Linda. They were warned that Eden might never run or walk without a limp. 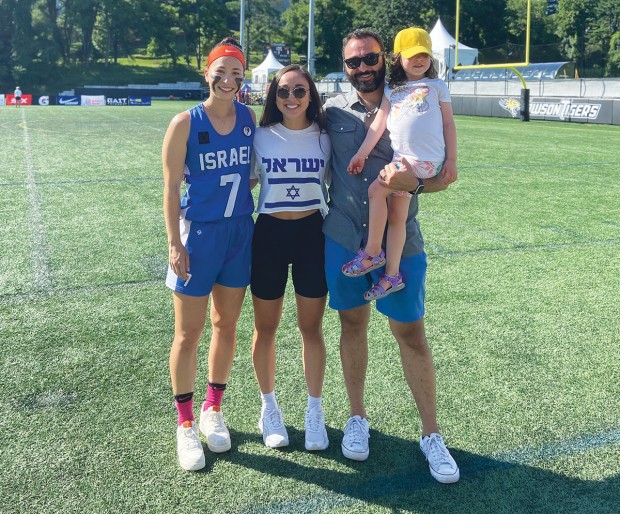 “I had sworn up and down I would never play lacrosse again after my surgery. It was such a big surgery, I’m actually glad I didn’t know how big before I had it,” Eden says of the osteochondral allograft transplantation she underwent just as hospitals began allowing elective surgeries again after Covid. The goal was to replace damaged parts of her ankle with bone and cartilage from a donor. “I was not destined for great things after that.”

But the coaches kept calling, checking in, and saying they’d make it work for Eden to play. In the meantime, she was recovering, doing physical therapy, and beating the odds. In September of 2021, Eden tried out for the Israeli team and made it. She would be playing the coming June (2022) in the Women’s World Championship in Maryland.

Even though she says her daughter had dreamed of playing at such a high level since she was in middle school, Linda says she told Eden, “I do not see how you’re going to be able to train and do everything you need to do [in school].”

For Eden, though, playing in the Women’s World Championship was too big an opportunity to pass up, and she started training. She moved her schedule around so that the time she would have had off during her fourth and final year of med school was pushed forward to be used for lacrosse. (Next semester, she will be working hard while her classmates’ schedules ease up as they prepare to graduate.) 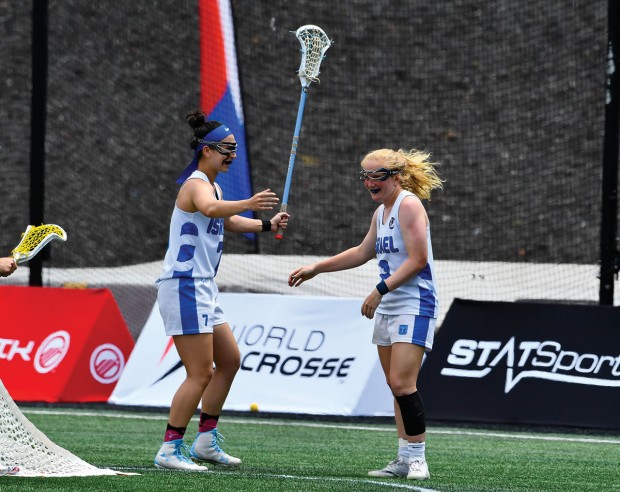 Eden and her teammates trained where they were, whether that was Israel, Houston, New Orleans, or other spots around the country. “We didn’t train for months on end like [the] USA [team], which is a powerhouse team,” she says. “Whenever I had a chance, I would squeeze a workout in. St. John’s let me use the facilities when they weren’t practicing. I made up the workout based on what I’d done in college – a hard bike workout one day, weights others, sprints another, and rest days to preserve what cartilage I have left in my ankle and knee.” Because all the women had played collegiately, they had a good idea of how to train on their own depending on their position. “Israel tapped into the best talent they could find,” Linda says.

“It was never the full team together until the week prior,” Eden says. “It’s a little bit crazy when you think about it.”

In June, Eden and her teammates gathered in Baltimore from all over the world to compete in the World Championship. She was joined by another Houston player and St. John’s graduate Lindsey McKone, who played for Northwestern University and is now playing at the professional level. 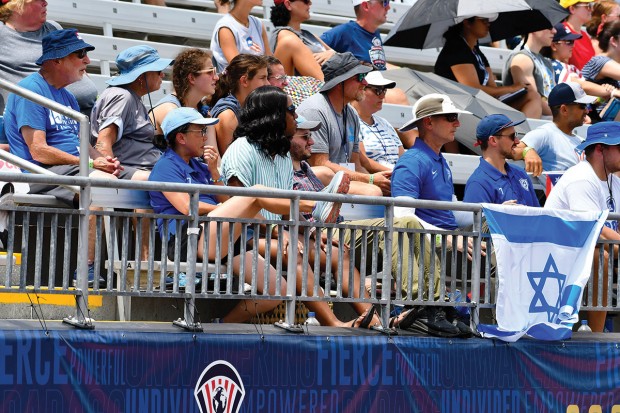 “It’s so special when you step on the main field in the stadium and you’re lined up with your teammates. It’s giving me chills right now. Everyone worked so hard to get there, and you’re finally there, and you get to just play,” Eden says.

In the end, Eden’s team ranked sixth out of 30 teams. “It was really cool to have all those people from all over the world come together and just click. It’s such a specific community – all women, all Jewish, all fighting for the same goal. It’s not a very common combination, so it bonds you for life.”

Eden also had her own community in attendance. Her Houston family and fiancé stayed the full 10 days, and lots of family from the Potomac and D.C. area joined them. Additionally, many of Eden’s former Hopkins teammates came to cheer her on, as did the Harlem Lacrosse team, who she had coached as a volunteer while in college.

The next Championship games will happen in three years. “God willing, I’ll be an orthopedics resident, which is basically no days off,” Eden says. Still, she says she’ll be ready. “One of my PTs told me way after the tournament that he’d never seen anyone do so well after the surgery. If my body allows me to, I will be playing again if I’m called upon.”