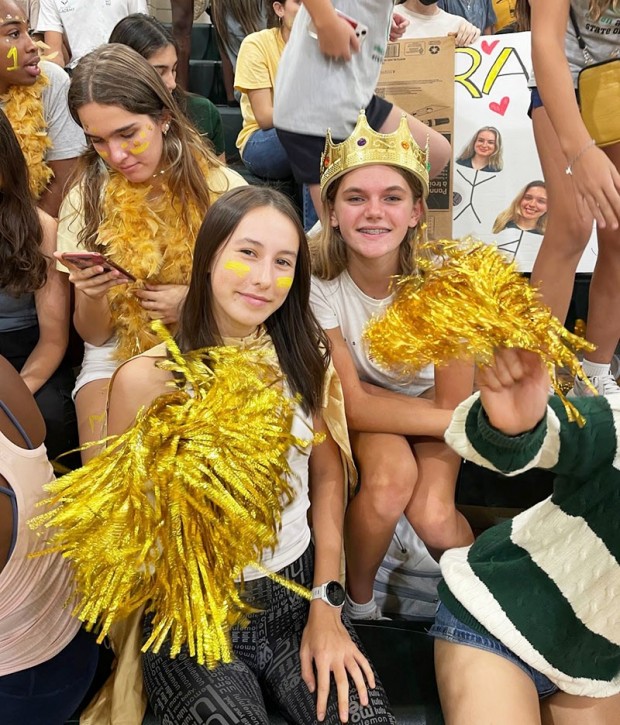 To kick off the start of the 2022-23 school year, Awty participated in the long-standing tradition of Fall Spirit Night. The Covid-19 pandemic prevented this event from happening for the past two years, but this September it was back and more successful than ever!

Fall Spirit Night has always highlighted two of Awty’s fall sports: field hockey and volleyball. Early in the evening, the girls’ and boys’ volleyball teams competed against Houston Christian and Episcopal High School, where the girls’ team won, and the boys’ team came just short of a win. Later that night, the girls’ field hockey team competed against Houston Christian where they emerged victorious with an impressive score of 8 to 0.

“I was so proud of our team,” said Feline Reutier, one of the star players on the girls’ varsity field hockey team. “We put in maximum effort from the second the clock started, and our hard work definitely paid off!”

In addition to sports, Fall Spirit Night also offers the opportunity for students to socialize with their peers. This year, Awty welcomed several new students into both its international and French programs, so this night was the perfect mixer. With taco and ice cream food trucks, a concession stand, a loud (very loud) student section, and plenty of music, the night was a massive hit!

While the night was a combination of athletics and fun, Awty also incorporated awareness. Each year in the United States, almost 16,000 children are diagnosed with cancer from ages 0 to 19. While Awty’s school colors are green and gold, in honor of national childhood cancer month, the theme of the night highlighted “Gold” to bring awareness and support to those suffering from the disease. Awty’s Spirit Club made certain that everyone was dressed in theme, and students showed support through signs, gold ribbons, gold clothing, and even gold hair!

After a three-year break from schoolwide gatherings, Fall Spirit Night was the perfect step towards normalcy.

“The event, featuring volleyball and field hockey, was an absolute success thanks to the efforts of the Awty Rams Booster Club and the student-led Spirit Club,” expressed Lindsay Youngdahl, Awty’s Athletic Director. “It was thrilling to see so many students, faculty, and fans out to support the Rams!”

Fall Spirit Night '22 was just the first of many athletic events, but so far Awty seems to be the epitome of school spirit. Go Rams!