Life: Mine for Instance 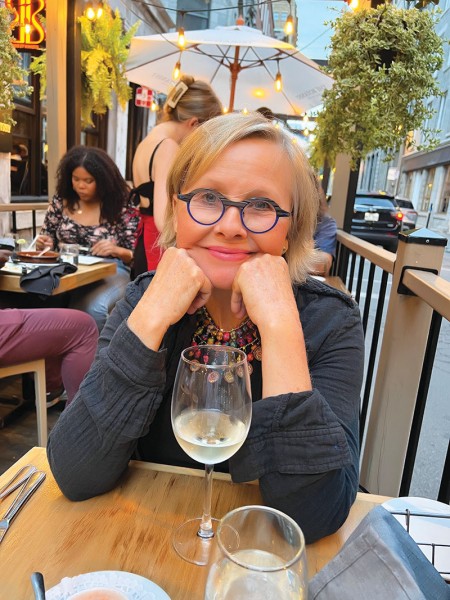 PONDERING OR PROCRASTINATING? Cindy Gabriel tries to trick herself into starting a memoir.

Here I was this summer, at a sidewalk cafe in Montreal. What was I doing?

Not writing my memoir. I’ve been not writing a memoir since the end of 2019 when I retired to write a memoir. Then came the Covid lockdown, a perfect time to write a memoir. Didn’t happen. Do I have to stop living in order to write about living? I don’t even like the word memoir anyway. It sounds too self-important. So let’s not call it a memoir.

Let’s just start here. Let’s call this a series of columns in The Buzz Magazines as always, just more memoir-ish starting with my youngest conscious years, in the late 1950s. It helps that my family published a newspaper at the time, The Fort Bend Reporter, which I recently found archived on the University of Texas campus at the Dolph Briscoe Center for American History. After two days of pouring through pages published between 1956-1960, I now have times and dates that coincide with my memory.

A main advertiser for the paper was the iconic Art Deco styled Cole Theatre, a major community hub in downtown Rosenberg. TV was just catching on. My great-grandmother planned her day around As the World Turns, a soap opera that debuted in 1956.

This made the movie industry nervous. So much so that big-time stars like John Wayne, Shirley Temple, and Roy Rogers popped in to promote their movies. Yep, Rosenberg was that big of a deal.

One example from the paper: On June 13, 1957, actress Ava Gardner appeared in person to promote her movie The Little Hut, including the chance to win a trip to the Fiji Islands, along with free Samsonite luggage. Movies shown at the Cole Theatre would change  every two days or so. Other movies showing that week included James Dean’s East of Eden and Rebel Without a Cause.

The Cole Theatre was also the town’s Saturday matinee babysitter. Kids of all ages poured in without parents, for a day-long double feature. I vividly recall my first time unsupervised. I was no more than 6; it was around 1960. As my nervous mom dropped me off, she looked me in the eye and said “Cindy, listen to your conscience.” She didn’t want me to be tempted to leave the theater to get a coke float at Gordon’s Pharmacy.

I was to go inside the lobby and wait for my more sophisticated friend, Ginger (who would unsuccessfully tempt me to go to Gordon’s Pharmacy). The theater was more exciting anyway, watching kids, some I knew, plopping down their quarters for a ticket into the tall, majestic lobby, then picking out a 5-10 cent item from the snack bar.

While picking out my own candy, through a window beyond the snack bar, my eye caught a line of “colored” children also getting tickets. They were ushered into a side entrance straight up to the balcony, bypassing the fancy lobby. I was stunned. The conscience my mother told me to listen to was working overtime. It was the first time I felt uncomfortably white.

Now I realize my father, Clymer Wright, did not shy away from the “prejudice issue” in newspaper editorials. A 1957 editorial headline in The Fort Bend Reporter said: “We Should Build a Pool for Negros.” This followed: “Under the system of segregation as practiced in the South, Negros cannot swim in the public pool. And they have no pool of their own. In addition Latin Americans shy away from the pool because of the great amount of prejudice from the whites.” My father attempted to point out the cruelty of leaving a sizable population of Rosenberg residents without a summer swimming pool because of our own white prejudice.

It was a bold statement for the times. When that editorial was written in 1957, African Americans had only been allowed to vote in Ft. Bend County for four years, a right they won in 1953.

Wait. This is supposed to be my story. I learned to swim in the Rosenberg public pool. I didn’t even notice that it was all white. What does any of this have to do with me? That conscience my mother told me to listen to is working again. There is no such thing as Black history without white history.

Now, I’m looking back at the balcony of the Cole Theatre. I wonder how many of those kids are still around. I wonder how their lives turned out. I wonder if any of them have ever spent a summer evening at a sidewalk cafe in Montreal.

Next month: “Forks on the Left. Knives on the Right.”