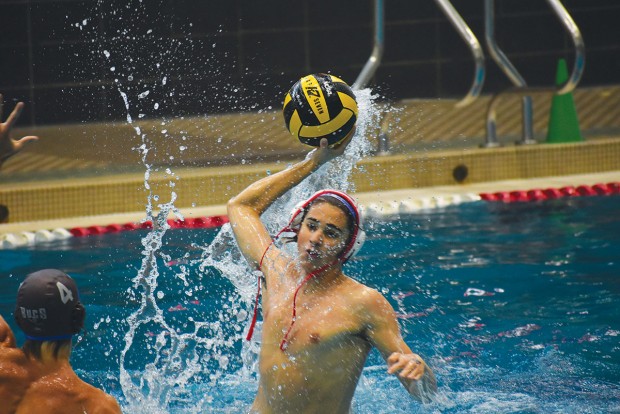 MAKING A SPLASH Memorial’s Sebastian Warren gets set to take a shot for the Mustangs in the inaugural season of UIL water polo. Entering the post-season playoffs, the Mustangs owned a number 10 state ranking.

With a 22-8 regular season record and a number nine state ranking, the Memorial Mustangs were off to a successful start in the first ever season of UIL boys water polo. Up until this season, high school water polo had only been played on the club level as part of the Texas Interscholastic Swimming Coaches Association (TISCA). “It’s definitely been a transition from TISCA to the UIL,” said Mustangs water polo and swim coach Jason Mauss.

“We’re actually playing less games than previous years in TISCA, but the one really good thing is that being part of the UIL is providing a lot of new schools and kids the opportunity to participate in the sport. Water polo is also receiving a lot more media exposure this year. So, that’s also a definite positive.”

There’s been plenty of positives all season for the Mustangs water polo program. “We won our first tournament of the season over in Cy Fair and our boys finished second in district to a really good team from Stake Jesuit. Seniors Sebastian Warren, Romain Joubert, and Cameron Brenton have all done really well for us. Also, our goalie Richard Ye suffered a freak type of injury and sophomore Sam Frank has stepped up and played great in his place.”

As for the Memorial girls water polo team, the Mustangs advanced to the UIL playoffs after winning the district 15-5A championship. The Mustangs defeated Stratford by a single goal and then a second time in overtime to secure the district title. “Those were great wins for us,” said Mauss. “Juniors Olivia Wilkinson and Paige Koehn have played really well all season. Also, our entire team has continued to improve and the girls have jelled together when it matters most.”

GREAT GOALIE Strake Jesuit goalie Chris Poisler has made it tough on opponents to score against the Crusaders this season. Strake Jesuit entered the first season of the UIL water polo playoffs owning a number nine state ranking.

After finishing third in the state while competing in TISCA last season, the Strake Jesuit boys water polo had their sights set on winning a UIL state championship. The Crusaders entered the playoffs as district champions while owning a number eight statewide ranking. “It’s definitely a different sort of challenge in the UIL playoffs,” said Strake Jesuit swimming and water polo coach Tim Keogh. “It’s single elimination with several rounds of the post-season playoffs. So, it is a tougher and more challenging road to win it all.”

The Crusaders have done plenty of winning all season while rising up in the rankings. “The thing about our team is that the guys play really well together and we have different guys step up every game,” said Keogh. “Our goalie Chris Poisler has been exceptional. He might be our best player. Also, players like Wyatt Hansen, Charlie Alley, Matthew Trail, and Zach Jones are among those who’ve shined on both sides of the ball. We’re just an overall hard-working team.”

BELLAIRE BLAST Bellaire outside hitter Auma Mbeche-Odhiambo packed a powerful punch for the Cardinals. The Cardinals junior led the team with an average of four kills per set this season.

With a 6-0 start in district 18-6A, the Bellaire Cardinals volleyball team had won 34 consecutive matches in district play dating back to the early part of the 2020 season. “The girls are doing great,” said Cardinals first-year head coach Melissa Martin. “From the first day of practice they came in ready to work hard and win games.”

Martin herself came into the season following in the footsteps of a pair of legendary volleyball coaches in Ap Clarke and then Nicole Blakeman. “I’m loving it here,” said Martin. “I was the junior varsity coach for 10 years and it’s just exciting to take over the varsity program.”

As for this year’s team, Martin says there’s been several major contributors including senior middle blocker Paris Gilmore. “Paris is my top middle blocker. She’s been on varsity for almost three seasons and leads the team in hitting percentage and blocks.”

In addition, junior outside hitter Auma Mbeche-Odhiambo is the Cardinals kills leader with nearly four kills per set. “Auma is just a fantastic outside hitter,” said Martin. “She also covers the court extremely well on defense.” Other top players for the Cardinals, according to Martin, include outside hitters Camille Lasics and Lucy Bannerman.

“Camille leads the team in aces and assists, while Lucy is a freshman who’s kind of our secret weapon on the court. She can put the ball away and has a great serve.  I just think we have a strong team across the board,” added Martin.