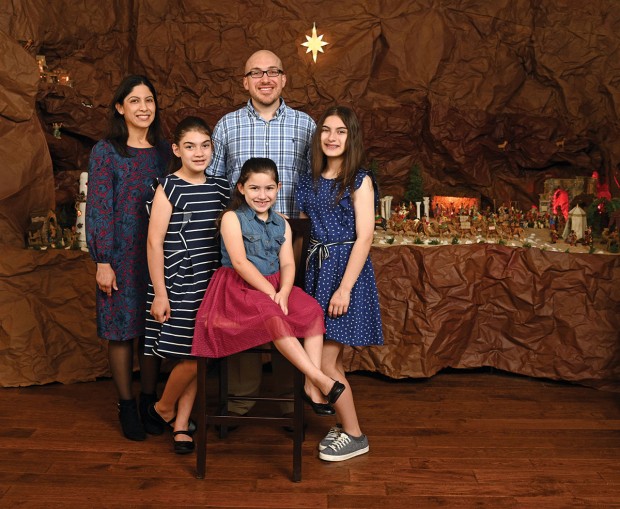 There is a rare, unique quality inherent in the holiday decorating at the Bellaire home of the Zarzour family. Beyond the sparkling lights adorning the outside of the home, the 12-foot trimmed tree on the inside, and the garland festooning the staircase, visitors discover the family crèche.

Crèche is a French word for cradle or nursery; in America it has come to be known as the representation of the Nativity scene. But there’s nothing ordinary about this Nativity scene. It starts with five bags of sand and two bags of dirt poured out onto tables in David and Alejandra Zarzour’s formal dining room. It’s the foundation for the miniature holy city meticulously detailed with 300 plus pieces made up of villagers, stucco homes, farms, livestock, lakes, and fishermen. Even crinkled, spray-painted builders paper lines the walls to resemble rock…it’s literally a whole village welcoming the wise men drawn by the bright star to a holy manger.

David, an anesthesiologist with U.S. Anesthesia Partners, can’t remember a time in his life when the family crèche was not on display in all of its diminutive glory. While some seasons demanded smaller productions than others, like the first years of marriage to Alejandra, an oncologist at MD Anderson, nevertheless, the deep meaning remained constant – a tradition that for this family can be traced back three centuries. 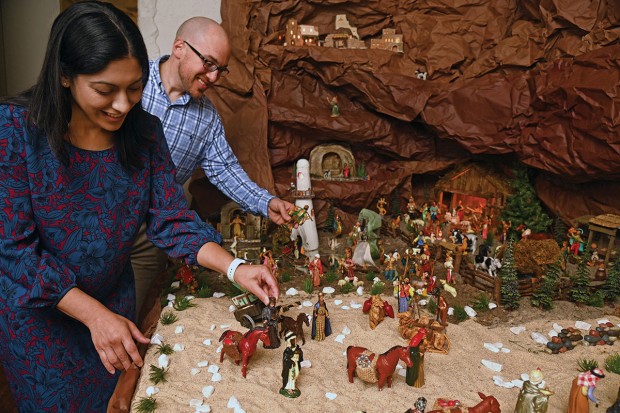 BUILDING A HOLY CITY Alejandra and David Zarzour spend weeks carefully designing and setting the scene for the family crèche. The family says this labor of love helps them celebrate and keep the focus on the reason for the season. The white tower depicts a lighthouse structure; it was made from a cast that David’s father, a doctor, brought home from the hospital. (Photo: jackophoto.com)

“It’s something my dad did, because his dad did and his dad and so on,” said David. “It’s one of those traditions that really means a lot to my family, and I take great pride in it. I’m teaching it to my three girls. Hopefully they carry the tradition on also.”

When it comes to the joyful task of picking out a new piece for the crèche, 11-year-old Sophia, 9-year-old Elena, and 6-year-old Christina are all part of the process

“I like looking at the individual characters and when they all come together it makes a really cool scene,” said Sophia, a sixth grader at the St. Thomas More Parish School.

“Building the crèche is such a unique family tradition,” said Alejandra Zarzour, David’s wife. “It is a labor of love. The kids enjoy putting it together as much as they enjoy decorating the tree. More importantly it symbolizes the true meaning of Christmas.”

The family crèche in David’s childhood home was four times as large as the crèche being displayed in the Zarzour home this Christmas. David’s dad, Steven Zarzour, passed away almost 20 years ago and the crèche was divided among David and his brother who lives in San Antonio. While David has curated his own large collection of pieces, with only half making it out into the scene, it’s the pieces from his father’s crèche that retain deep sentimental value.

“My dad hand-painted many of the figures himself. He would add embellishments,” recalled David. “I can remember him sitting for hours and hours painting, and he would use these baby paintbrushes.”

Even to the first-time observer, those pieces are obvious because his dad used a shinier, metallic paint, which makes them glisten in the light. To the delight of their mother, Beverley, it’s a special childhood memory still reenacted in the homes of both Zarzour brothers every Christmas.

“My dad would drag us to every mom-and-pop Christmas store around to buy new pieces,” said Steven Zarzour, David’s brother, an attorney for Whataburger. “We made a whole adventure of it. One time we drove all the way from Houston to Frankenmuth, Michigan to get one piece.” 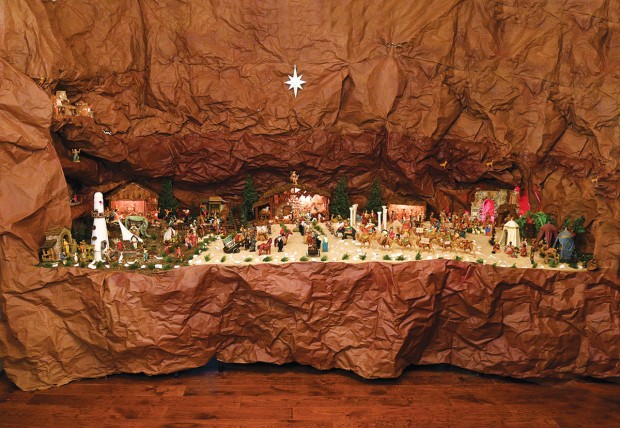 AN EXPRESSION OF REVERENCE The crèche is made up of small 6-inch statues, mostly from the Italian brand Fontanini. Many of the pieces are special as they belonged to David's father, Steven Zarzour. (Photo: jackophoto.com)

Catholic scholars believe the nativity tradition started in the year 1223, when St. Francis of Assisi had live animals and hay at the Midnight Mass in the small Italian village of Greccio, about an hour and half from Rome. According to writings about him at the time, Francis was becoming concerned about the cavalier attitude that many had toward Christmas and the increased focus on gift-giving.

“The spiritual side of the reenactment and why St. Francis did it, was to help him see with his own eyes what this must have been like; to help people see how Jesus entered the world,” said Father Clark Sample, Pastor of St. Thomas More Catholic Church who attended seminary at The Vatican and actually spent a week in Greccio for a silent retreat. “It affirms the imagination and how art really helps us go deeper into the mysteries of the faith to help you envision what Christmas was all about.”

Most of the pieces in the Zarzour family crèche are from the Fontanini brand, made in Italy. However, many pieces are so old they are no longer in circulation. The brothers estimate their cumulative collection has a value of about $20,000 and yet for the Zarzour family, this sacred act of faith defies any worldly appraisal as a source of inspiration. This ritual honors both Christ Jesus and the generations of their family from Egypt that carefully preserved this expression of reverence.

“We don’t hold any kind of open house or anything. We just like to put on some Christmas music, turn down the lights, and just be present,” said David. “If we never put a Christmas tree up again that’s okay. This is holy to me. This is the real deal.”

The whole process of building the crèche takes about two weeks; David tweaks scenes all the way up to Christmas Day with plenty of contemplative moments. He has a favorite piece, a commoner at the water well.

“This is my G.I. Joe from when I was a boy that my dad painted and dressed up. So this one is probably the most valuable to me.” 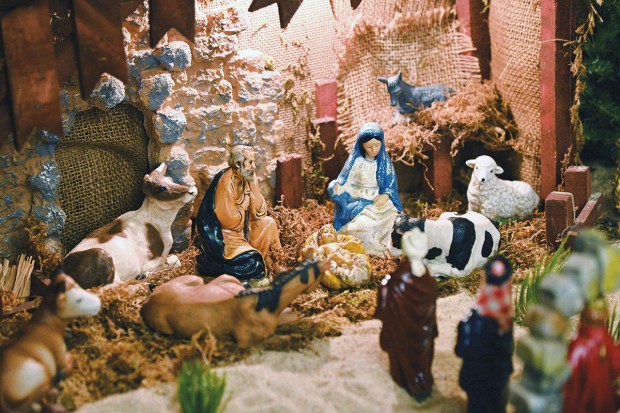 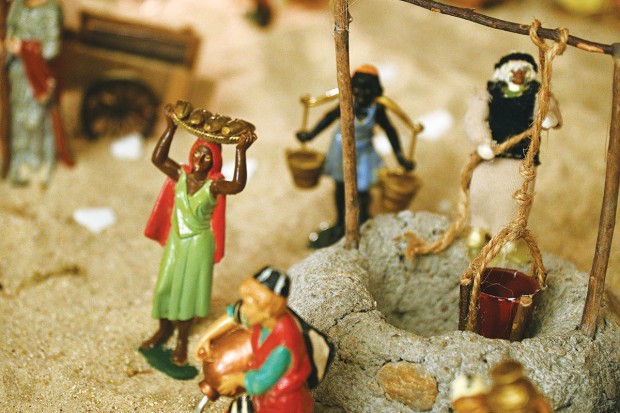 David’s favorite piece, a commoner at the water well, is his G.I. Joe from when he was a child (bottom right photo), which his dad painted and dressed up. (Photo: jackophoto.com) 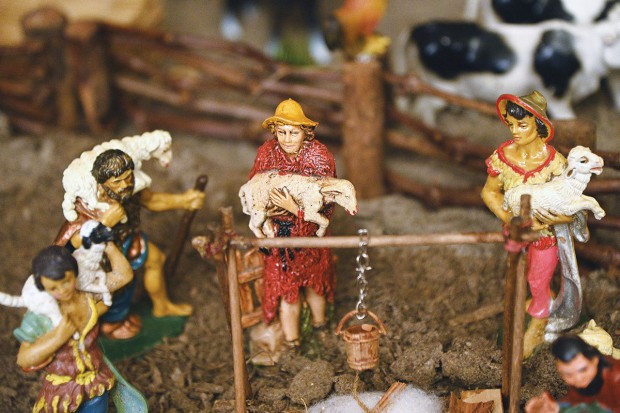 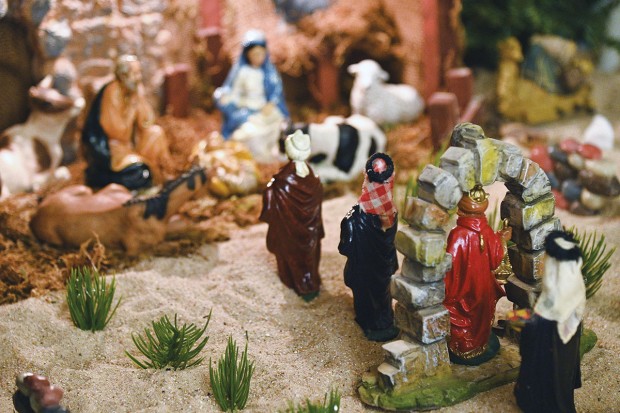 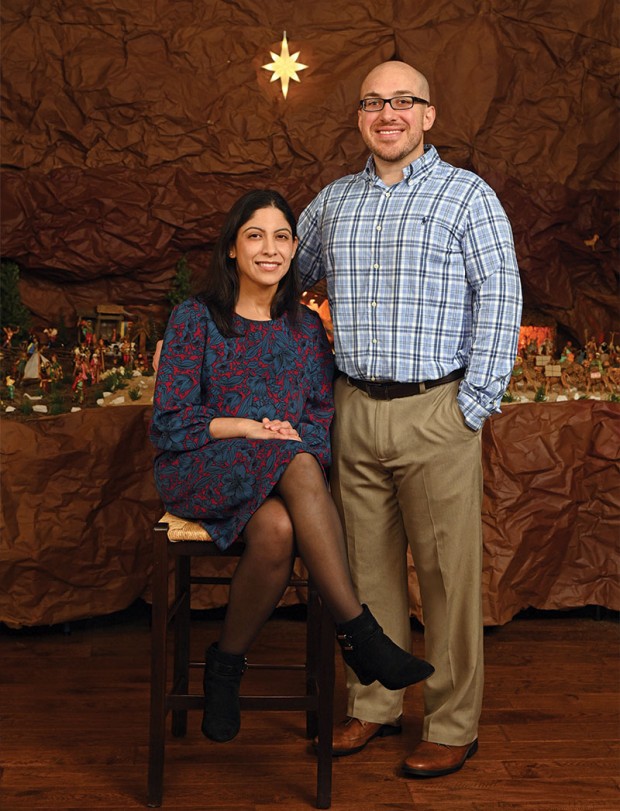 David Zarzour (with wife Alejandra) finds spiritual and sentimental meaning in creating a Christmas crèche and has shared the tradition with his family. (Photo: jackophoto.com)