Creating Christmas Love Stitch by Stitch: Stockings through the Generations 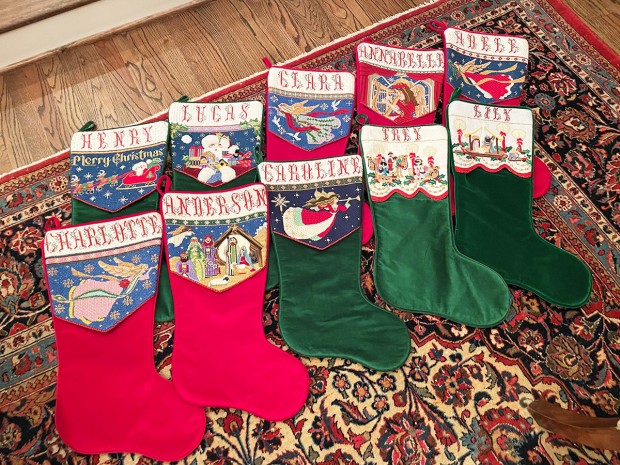 This series of stockings were created by Donna Moncrief for her 10 grandchildren.

The Stockings were hung by the chimney with care, in hopes that St. Nicholas soon would be there. -Clement Clarke Moore (The Night Before Christmas)

For these Buzz neighbors, their love of needlepointing stockings has brought years of Christmas magic to their homes and their hearts.

Elizabeth Groff loves Christmas. She said needlepointing a stocking brings her fond Christmas memories and makes it feel like Christmas all year long. Elizabeth shared, “Over the years, I have completed stockings for my sons, Christian and John Groff, my nephews, Henry and Gus Groff, as well as my husband Christian, Sr. This year I finally found the perfect stocking design for me. It is so cute, with two boys that remind me of our sons and represent our family. The boy in back will have light blond hair and will be playing with Thomas the Tank Engine, while the dark headed boy in back will be holding a black dog that looks like our dog, Emma.”

John Groff is thankful that his mom made his stocking so big!

When Courtenay Butler was newly married, her sister suggested they learn how to needlepoint stockings. “My sister realized she did not enjoy needlepointing and decided she was absolutely never making another stocking. I realized I loved it, and it was the beginning of my needlepointing obsession!” Since then, Courtenay has needlepointed 26 more stockings.

Growing up, stockings were a big part of Courtenay’s Christmas mornings. The tradition has continued. “Each stocking had a tangerine in the bottom and chocolate coins sprinkled throughout. Everyone sat together to discover the treasures in their stockings. Having homemade stockings has been meaningful to our family. My husband and I enjoy using our childhood stockings and decorating with both of our mothers’ stockings.” 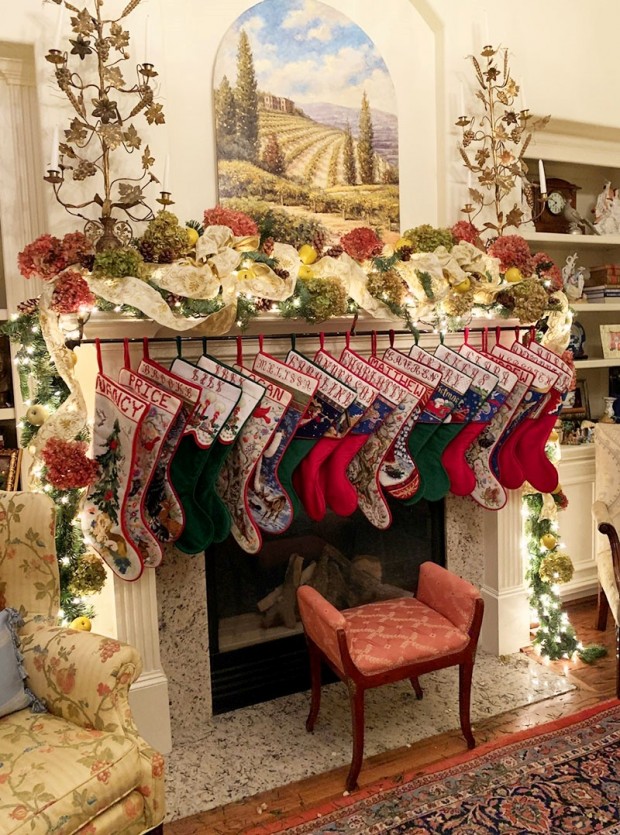 Nancy Moncrief needlepointed so many family stockings that they had to hang them on a curtain rod.

“Hanging all 19 stockings from the mantel was a challenge,” Nancy said. “Then I decided to try looping all the stockings onto a curtain rod and using several stocking holders to hold the curtain rod. It works beautifully.”

Nancy continued, “I like the joy each person gets from having their own special stocking, each a work of art, that I feel adds so much to the Christmas decorations and moments of a wonderful season.” 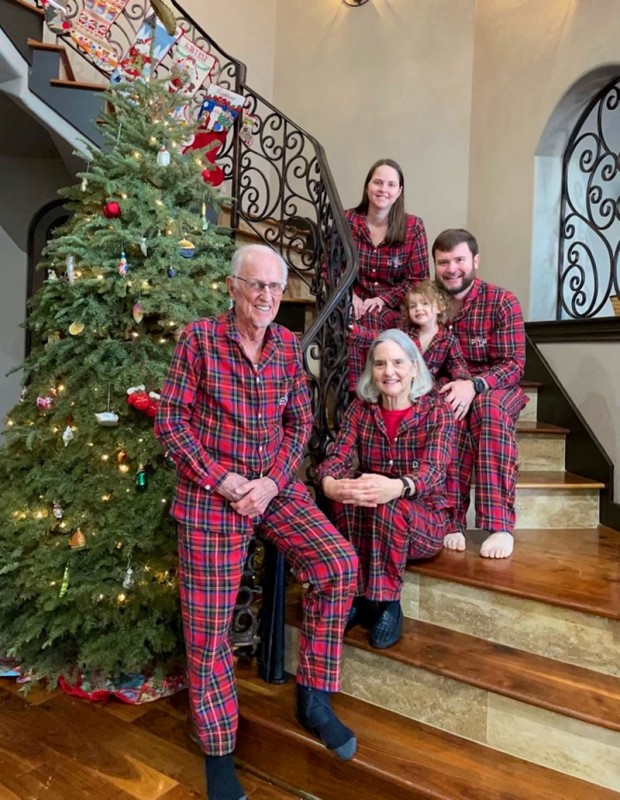 Diane Burnett's family, comfy in their pajamas, getting in the holiday spirit and standing by their stockings. Pictured: Diane and Ed Burnett, daughter Emily Blessinger, son-in-law, Philip, and grandchildren, Josephine and Atticus.

Diane Burnett started needlepointing after her daughter Emily Blessinger was born. A stocking for their new baby, one for her husband, Ed, and a third for herself. For many years she did not do any needlepointing but upon retirement started it back up. “When Emily got married, I wanted to make a Christmas stocking for her husband, Philip. I discovered amazing intricate hand painted canvases at The Needle House. So the journey began. This stocking was much more intricate than those I had done before so I decided to track my time. It took me around 400 hours to complete the stocking!”

She continued. “Next our granddaughter, Josephine, came along so I made a stocking for her, but this time a stocking with a needlepointed ‘cuff’ (top of the stocking) with velvet bottom. Then most recently, a needlepoint stocking for our grandson, Atticus, as well. For me, homemade stockings represent a lot of love. Items lovingly made by hand are priceless.” 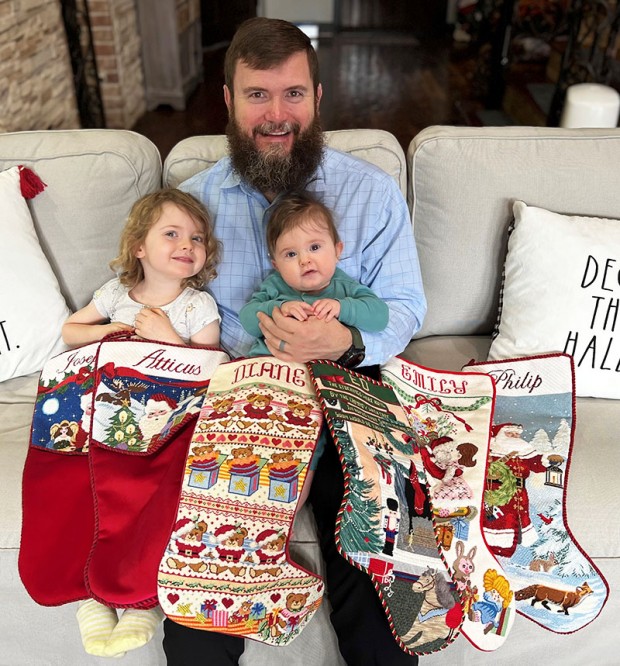 Philip Blessinger and children Atticus and Josephine hanging out on the couch with the special Christmas stockings made by their grandmother, Diane Burnett.

Emily shared, “The stockings have always been something that my mother cherished greatly. I think I took it for granted as a child. Just recently, she was helping me with a needlepoint project, and I have a newfound appreciation for the time and effort required to needlepoint.”

Emily continued, “My mother has always been very dedicated to making stockings for everyone in the family. She would probably say that the stockings are her most valued physical possession. We even keep them in a fireproof safe when it’s not Christmas time.” 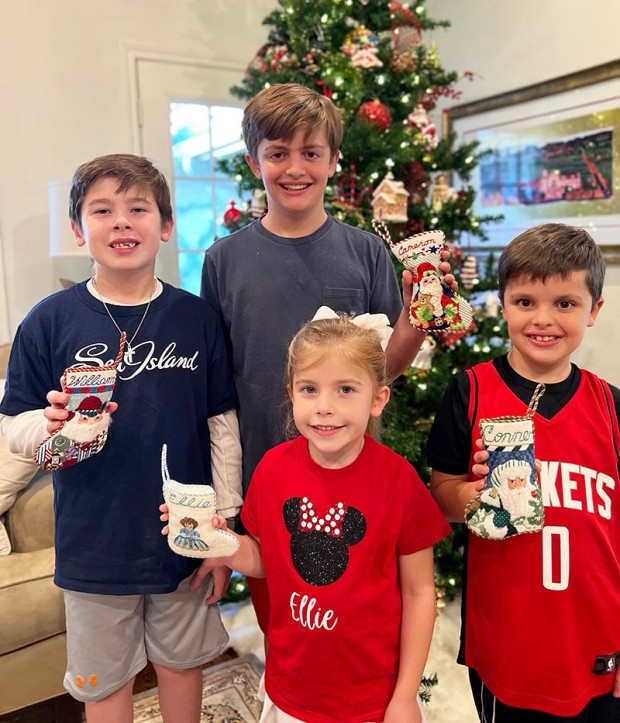 William, Cameron, Conner, and Ellie with their unique mini needle pointed stockings that were lovingly made by their grandmother, Sally Nelson. The stockings hold the silverware on the table set for Christmas dinner.

Early in their marriage, Sally and Dennis Nelson moved to Borger, Texas, outside of Amarillo. “Dennis was working 12 hours a day during the middle of winter in West Texas. I needed something to do, so I started needlepointing.” Over the years Sally has stitched a dozen large stockings for the family and another 15 personalized mini stockings. Sally shared, “We use the mini stockings on our dinner table every Christmas Eve to hold each person’s silverware and napkin.”

Sally shared, “I love stitching because I feel it is a legacy I can leave to my children and grandchildren and maybe even my great-grandchildren. It is something I can share with them forever. It takes patience and a great deal of time but is so rewarding when you receive the finished piece.”

Editor’s note: For more on holiday needlepointing, read Thanksgiving in Stitches by Andria Frankfort and Handmade Decorations by Jennifer Oakley. 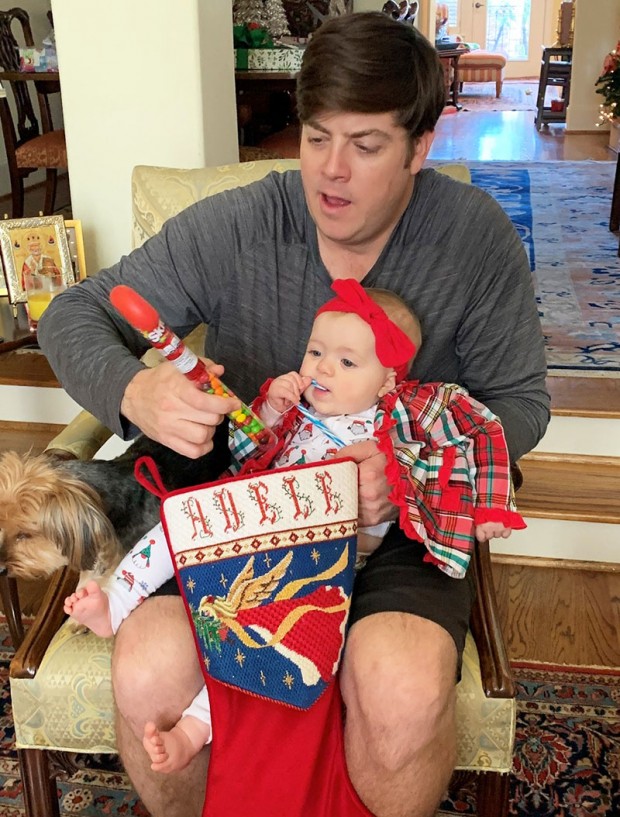 Baby Adele enjoys opening her stocking, which is almost as big as she is! 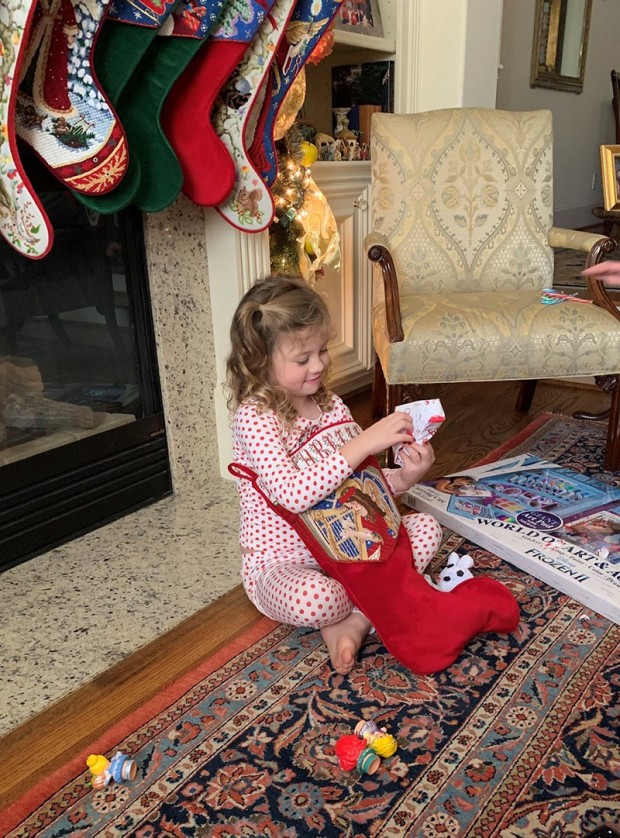 Annabelle having fun finding the treasure in her stocking. 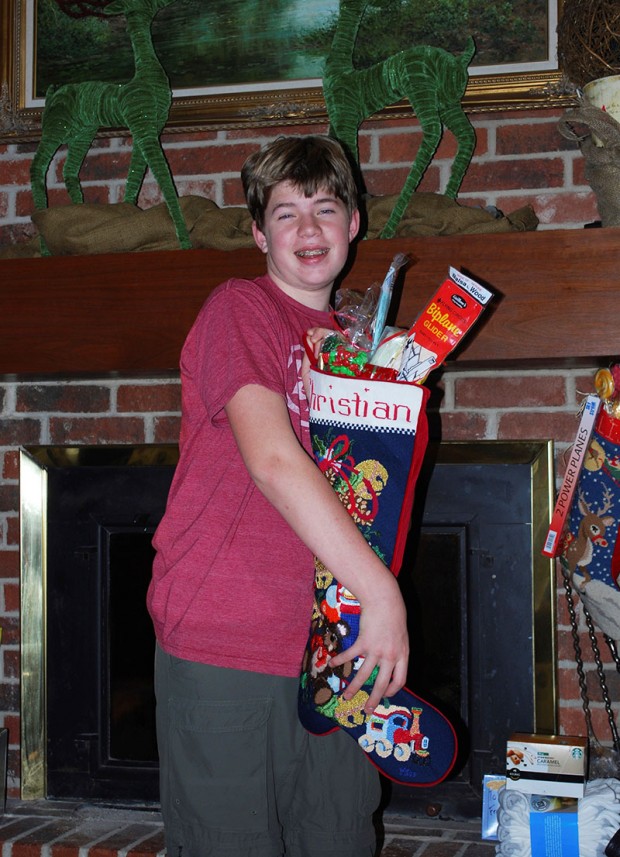 Christian Groff needs both hands to hold up his stocking. 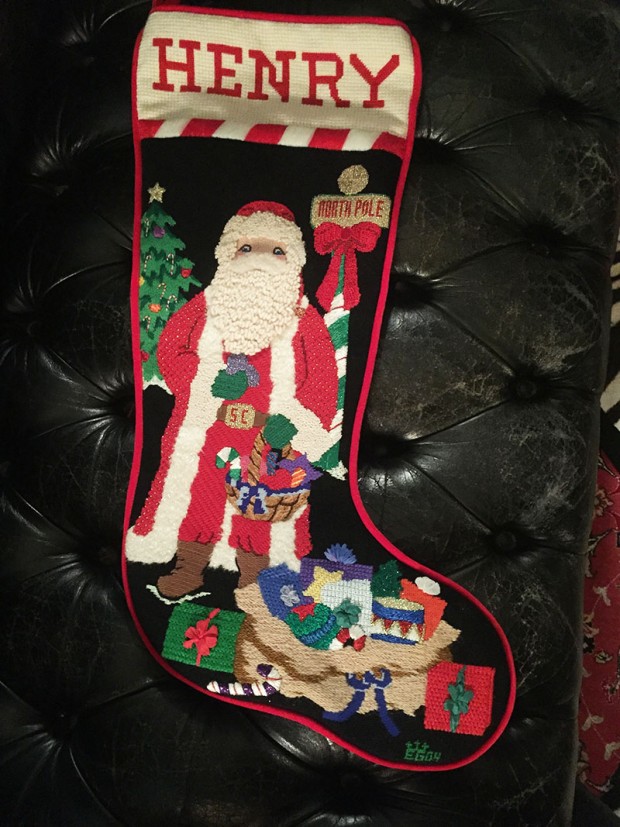 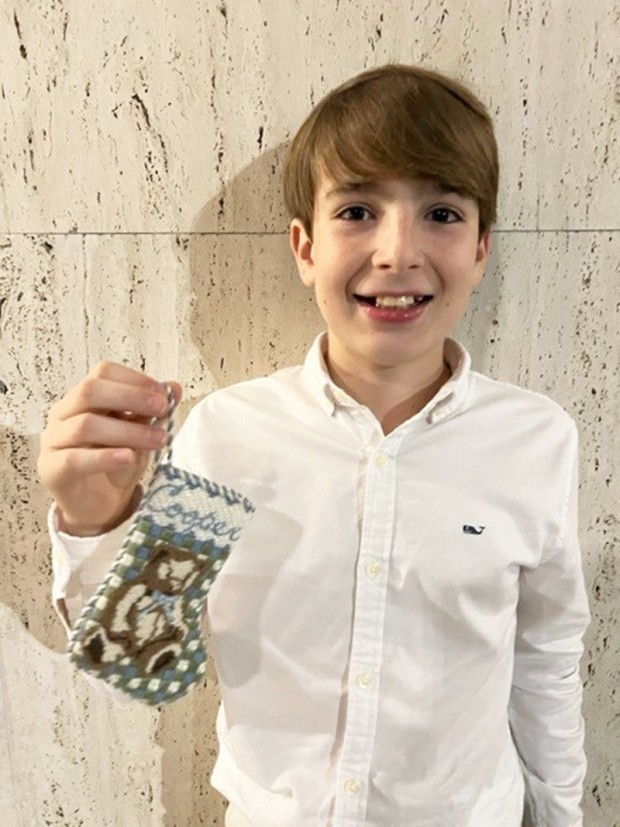 Cooper Nelson with his mini stocking. 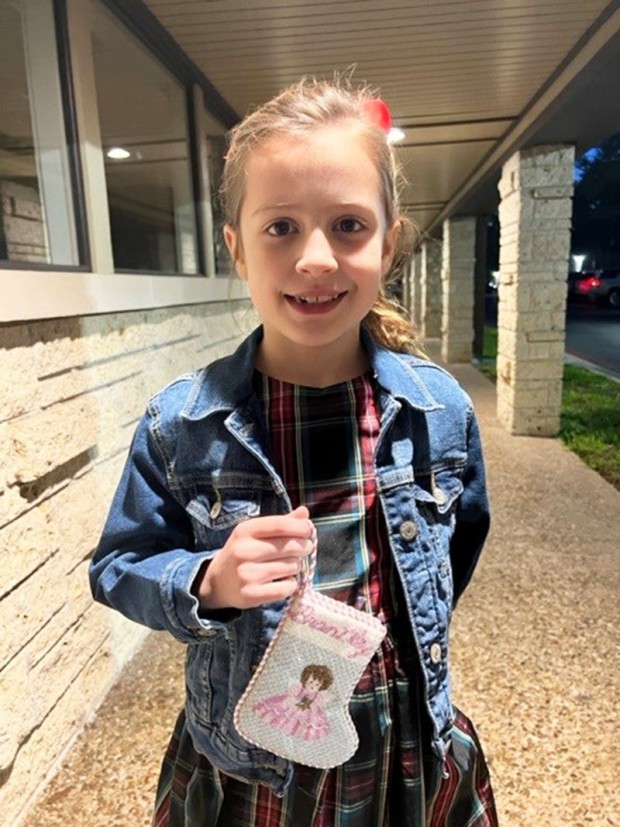 Ellie Butrum holding up her stocking. 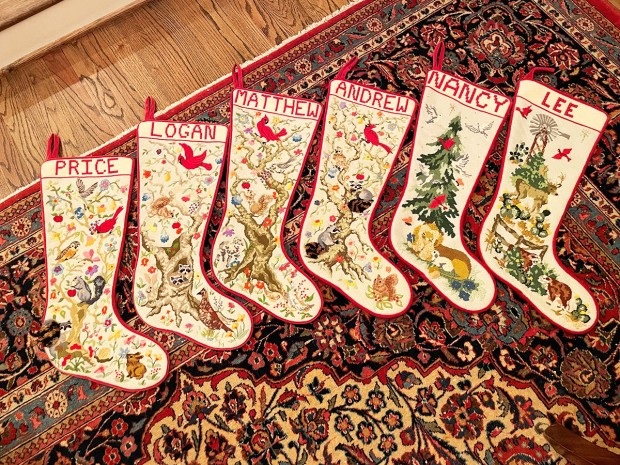 Nancy Moncrief's stockings for herself, her husband, and her four sons. 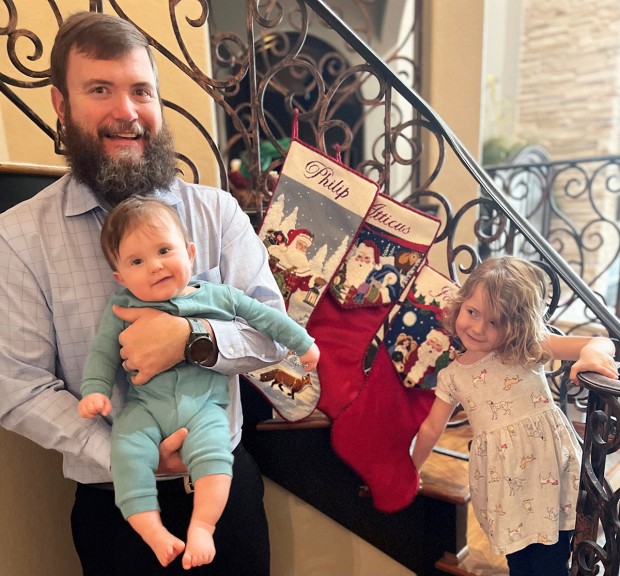 Philip Blessinger and children Atticus and Josephine are all smiles hanging out by the stair railing where the Christmas stockings made by their grandmother, Diane Burnett.