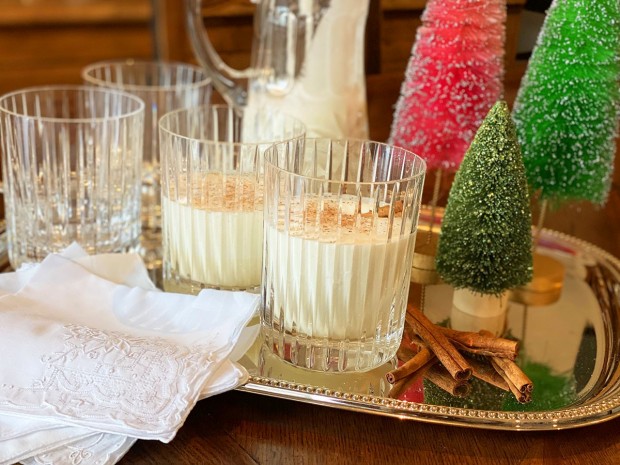 Homemade Eggnog might sound daunting but it's simple to put together. This version, based on Martha Stewart's recipe, is well worth it.

Christmas will be transformed when you stop buying cartons of eggnog and make your own. Last week, we spotted Martha Stewart making her Martha Stewart’s Famous Eggnog on Today, and we decided to give it a whirl. How happy we were that we did!

Who knew you could even make homemade eggnog? It sounds vastly more daunting than Milk Punch. (We’ve talked about that in depth here, and again for a quicker recipe-only here.) But is it? No. We were delighted to find that homemade eggnog requires only some really fresh eggs and a few minutes of whisking. Which I chose to do in the stand mixer, making eggnog the simplest of super simple Christmas Eve or Christmas morning treats.

This is frothy, gluggy, whipped-up, dangerously boozy yumminess that should definitely be enjoyed after church. Merry Christmas!

Martha Stewart’s Famous Eggnog
The original recipe makes eggnog for a big crowd. We halved the recipe here. Also, if you prefer a little less kick, you can scale down the alcohol by a quarter to a half.

In a stand mixer with the whisk attachment, beat the egg yolks until thick and pale yellow. Gradually add the sugar to the yolks. Beat in the milk and 2 ½ cups of the cream. Add the bourbon, rum, and cognac, stirring constantly. Refrigerate until ready to serve.

Just before serving, beat the egg whites until they are stiff, then fold them into the eggnog. Whip the remaining heavy cream until stiff peaks form, and it fold in. Sprinkle with nutmeg.

PS: Prefer eggnog flavors in a cookie version? Check out these Eggnog Snickerdoodles.

Geeks Who Drink Trivia Night at The Maple Leaf Pub