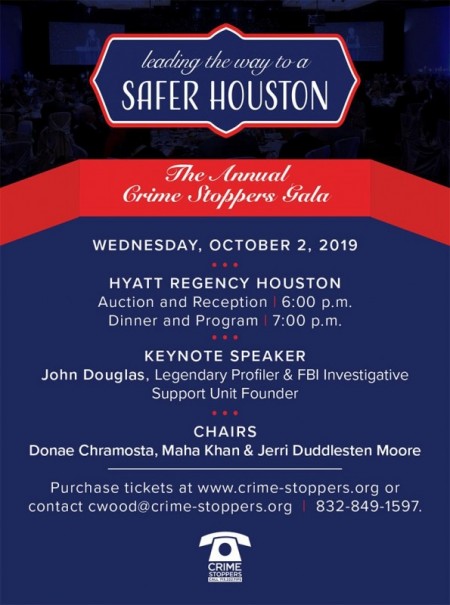 Crime Stoppers of Houston will host its 27th Annual Crime Stoppers Gala on Wednesday, Oct. 2, 2019 at 6 p.m. at the Hyatt Regency Hotel Downtown. Chaired byDonae Chramosta, Maha Khan and Jerri Duddlesten Moore, and joined by Honorary Chairs Brigitte Kalai and Sippi Khurana, the event will celebrate the non-profit’s ongoing crime solving and prevention efforts to make Houston and Texas a safer place for all, and offer an opportunity for the community to get involved in the fight against crime.

As an innovator at the FBI in the late 1970s, Douglas developed new investigative techniques for hunting serial killers, sex offenders, and other violent offenders. Advancing the use in investigations of the procedure known as criminal profiling, Douglas became widely recognized as its top authority. A mix of psychology, pattern recognition, and inductive/deductive reasoning, criminal profiling allows investigators to make educated guesses about suspects - sometimes accurately predicting their age, background, personality, and other identifying characteristics from the barest of clues. While leading the FBI’s Investigate Support Unit, Douglas used profiling in numerous prominent cases. Season 2 of Netflix’s series Mindhunter drops on Aug. 16; the series first premiered on Netflix in 2017 and featured an FBI unit tasked with profiling serial killers, based on Douglas’ book of the same name.

Proceeds from the annual gala will benefit Crime Stoppers of Houston’s mission to solve and prevent serious crime. The nonprofit’s crime prevention programs continue to serve the local Houston area and continue to empower, educate and engage adults and youth from across the State of Texas.

For information on how to purchase tickets or become a sponsor, please contact Cabell Wood at 832-849-1587 or [email protected].