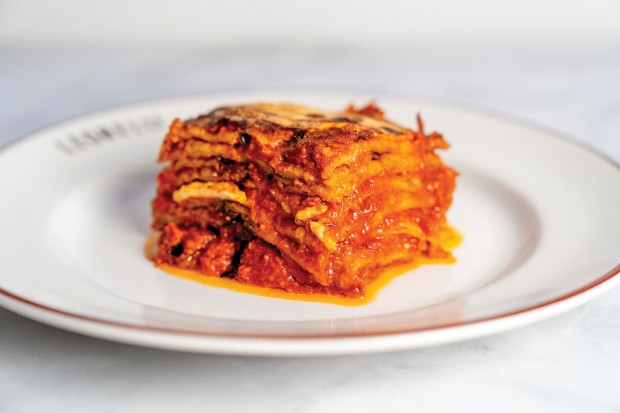 This family recipe hearkens back to the warmth of Michelin-starred chef Jonathan Benno’s grandmother’s kitchen. In the summer, she used fresh tomatoes and eggplant plucked from the garden.  It remains his favorite dish.

The marinara sauce is always good to have on hand for a quick, easy weekday meal. It is the foundation for not only eggplant parmigiana but countless other Italian dishes.

Add olive oil to a heavy-bottom pot or pan – heat oil to temperature over medium heat. Add onion and garlic and cook until soft, constantly stirring to prevent browning. Add tomatoes and bay leaf. Cook on low flame for about 2 hours, stirring occasionally. Turn off heat, and season with salt and pepper to taste.

Stir in red wine vinegar and basil and allow to cool. You’ll end up with about 2 cups of marinara. You can store the sauce in the refrigerator until you’re ready to make the eggplant parmigiana. It will keep for about five days.

While eggplant is “sweating,” add canola oil in a deep sauté pan. Heat the oil to 350° F.

While the oil is heating, dab paper towels on the eggplant to remove the remaining bitter water. Dip the eggplant slices into the AP flour; make sure the slice is coated. Once coated, give it a tap to release the excess flour.

Fry the eggplant slices in the oil until golden brown on each side. Once golden brown, pull them out and place on paper towels. Repeat this process in batches to prevent overcrowding and until all the eggplant is fried.

Assemble the eggplant parmigiana in a small baking dish. Start with a layer of marinara on the bottom of the dish, then eggplant, then Parmigiano Reggiano cheese, followed by mozzarella. Season with salt and pepper.

Repeat this process until you get to the top of the baking dish. The last ingredient on top should be mozzarella.

Place the eggplant parmigiana in the oven and cook for 45 minutes or until it is golden brown on top and the sauce is bubbling. Let it rest for 5 minutes before serving. Makes 3-4 servings.