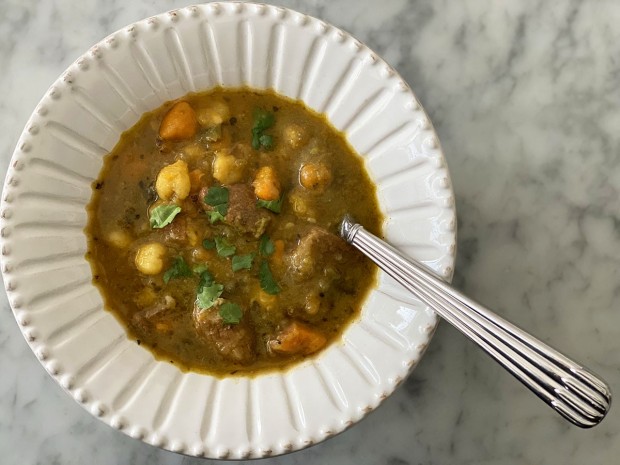 Pork Chili Verde is a hybrid between chili verde and posole, and it's a happy surprise.

Pork Chili Verde is a hybrid between chili verde and posole, and it's a happy surprise.

Heat the olive oil in a large, heavy pot over medium-high heat. Pat the pork dry with paper towels and season generously with salt and pepper. Add the pork cubes to the pot and cook, turning occasionally until browned on all sides. Use a slotted spoon to remove the pork to a bowl. Drain all but 1 tablespoon of the fat in the pot.

To the same pot, add the onion and sauté over medium heat until it is translucent. Stir in the cumin and oregano, then the chiles. Put the pork back in the pot. Stir in the tomatillo sauce, then the sweet potato, then add 4 cups of the chicken broth. Season with 1 teaspoon salt and ¾ teaspoon pepper. Bring to a boil, then lower the heat to medium-low, cover, and simmer for 2 hours, stirring occasionally.

After 2 hours, add another cup of chicken broth. Cook uncovered on medium-low for another hour. Let the chili cool, and refrigerate overnight.

Skim the top layer of fat off the cold chili. Stir in 3 cups chicken broth and hominy. Bring to a boil, then simmer on low for 30 minutes. Season to taste with salt and pepper.