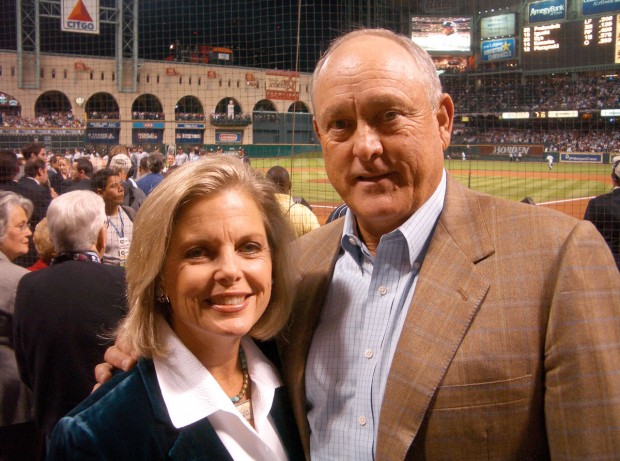 If your job were to create a fictional person to throw out the first pitch for the first World Series game ever played in Texas, you’d want to make it mythic.

As the scriptwriter, you’d want to create a character who was born in Texas, who played Little League in some small town and who dreamed of a big-league career while witnessing the world’s first domed stadium emerge from a giant construction pit in the ground.

Because the big game would be held in Houston, you’d want him to grow up and play for the Astros, maybe make him a flame-throwing pitcher on some of the best Houston teams ever—teams that come as close to going to the World Series as you can possibly get without breaking through. After that, you’d pencil in a trip to Cooperstown, where your leading man would be enshrined in the Hall of Fame on the first ballot.

You wouldn’t want him to stray too far from baseball. So you make him an executive with the club. Keep him in the family, so to speak. If you didn’t mind risking all plausibility, also make him an owner of a couple of minor-league teams. Of course they’d have to be Astros farm teams, and many current Astros would have come of age while playing for him.

The day after making that first World Series pitch, Nolan and his wife, Ruth, sat down with The Buzz to reflect on a full life in baseball— as a sandlot player, professional pitcher, Hall of Famer, front-office executive, minor-league team owner and fan.

“Baseball has always been a huge part of our life. Growing up together in Alvin, I used to watch him play Little League, and my dad was an umpire,” Ruth said.

“What got me watching the Series last night was that it brought back all those feelings of anxiety and stress and hopefulness I used to feel when Nolan was pitching 10 years ago. You are so into every pitch. The exuberance and the exhaustion.”

So what was the pitch Nolan threw from the mound on that warm October night? Was it the famous heater? Or did he snap off a curve just for show?

“At this point in my life, I was just trying to get it there,” Nolan joked.

It wasn’t his first trip to a World Series mound. Nolan was a member of the 1969 Miracle Mets and made a relief pitching appearance in Game 3, pitching 2 1/3 scoreless innings while facing great Oriole players like Frank Robinson, Boog Powell and Brooks Robinson. The Mets won that game, and improbably, the Series.

“Like this current Astros team, we had mainly young players with a few veterans. We played hard and things worked out for us. People considered us underdogs, but we never let that be a deterrent,”

Like many observers, Nolan figured his Mets would make it to the Series again. But he never again reached that big stage as a player. “When you play the game long enough, you realize how special the World Series is. You understand how hard it is to win it all.”

Despite the disappointment of falling to the White Sox, Nolan believes this Astros club has given Houston a lasting gift.

“When you think of the evolution of baseball in Houston—from Buff Stadium to Colt Stadium to the 8th Wonder of the World to Minute Maid Park— it’s been a long trip. I’ve seen it happen, and I think baseball is stronger in Houston than it’s ever been. This team now has an identity and a tradition. It has its own dedicated park. It has players like Biggio and Bagwell, stars who are fan favorites and who have stayed with the organization. And then winning in the style they did this year–never giving up and showing the heart of a champion. As a fan, it’s very gratifying to see baseball take center stage in your city.”

That doesn’t mean that Nolan and Ruth don’t have some concerns about the state of baseball here. They worry that some coaches of young players are obsessed with winning instead of focusing on healthy development and having fun. Kids who play one sport all year long are more prone to repetitive-stress injuries than those who enjoy some seasonal variety.

“Some folks look at sports for the wrong reasons: financial rewards or being the next star,” Nolan said. “What’s really important is the love of the game.”

Editor’s Note: Ruth Ryan was a contributing writer for The Buzz from Jan.-Oct. 2006. See her articles here.