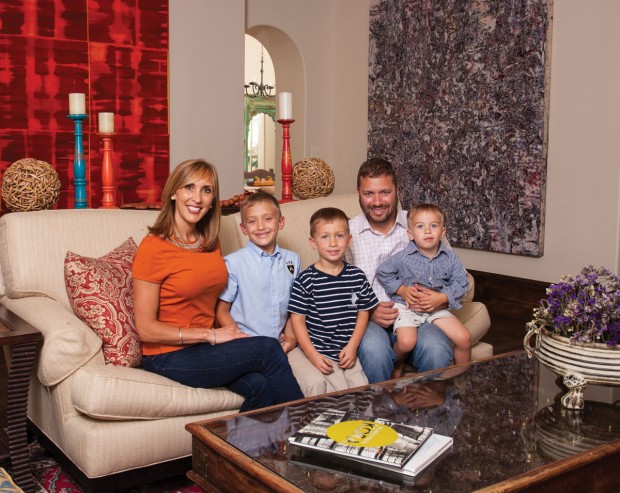 Art and family mix in the Neumann house. Cassie and Spencer, with sons (from left) Noah, Nelson and Niles, are surrounded by work from artists Oliver Arms (right) and Ricardo Mazal. (Photo: bookwalterphotography.com)

Cassie Neumann loves to flex her design muscle. The self-confessed Pinterest addict was stashing away style ideas in her head long before the popular website tool became the go-to place for home inspiration.

“My mind’s always thinking about that stuff. I’m kind of crazy that way,” she says of her Spanish Revival home in Bellaire, shared with husband Spencer and their trio of blond, blue-eyed, always-in-perpetual motion boys, Noah, 7, Nelson, 5, and Niles, 2.

The testosterone factor lends itself well to Cassie’s design philosophy. “The more dings, the better. I want our place to look weathered and lived in,” she says.

As if on cue, toddler Niles catapults onto a 17-foot-long cantina that was pulled from a bar in Mexico and repurposed as a buffet in their foyer. Then he’s off, catching up to their dog, Tessa, a moppy mini goldendoodle. “Can’t hurt a thing around here,” quips Cassie. “The furniture is indestructible.”

This day, sunlight streams through arched windows, and an infectious Latino beat pulsates through the house. You half expect the homeowners to break out in dance. The place is a delightful freestyle mambo of kids, music, fine art and original south-of-the-border details with most of the furniture designed by Cassie and built by craftsmen in Mexico.

It’s a merry mix of everything they love, inspired by their travels to Mexico, Spain, California and a second home in Florida that soaks up Cuban influences. Think lots of curves and arches, vibrant hand-painted Talavera tiles, courtyards, patios and ornamental ironwork.

“There is just such a rich cultural look to it all,” Cassie says of the abode, designed by architect Todd Blitzer of Mirador Group.

“There’s a charm to it, a relaxed elegance,” interjects Spencer, a political consultant who this day is chatting it up with clients on the phone. He does a fair bit of traveling, handling national campaigns from all points domestic. So he appreciates coming home to his comfortable casa.

“A good place to put your feet up,” he says. 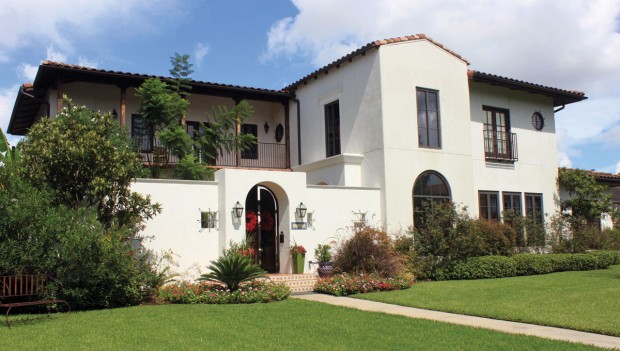 The architecture was influenced by travels to Mexico, Spain and California. (Photo: patrickbertolino.com)

His passion for art rivals that for politics. The avid collector planned the house to accommodate large abstract pieces. Their color pops against soft, off-white walls. A large, sinuous, organic sculpture with the feel of lava rock takes up residence in the den. “I’ve always been involved in the arts, all kinds, the whole culture of the arts,” says Spencer, who inherited his bent from a Julliard-trained pianist mother. He served on the board of the Cynthia Woods Mitchell Pavilion in The Woodlands for six years.

The couple doesn’t subscribe to conventional wisdom that art and children don’t mix. In fact, they co-exist quite peacefully in the Neumann house. “We’ve taught our kids a healthy respect for it,” says Cassie. “When people first walk in they don’t want their kids to touch anything, but I assure them we aren’t fussy. The art is the only thing off limits.

“If anything, we blur the lines a lot between our things and our kids’ things,” she continues. “We don’t want any spaces to be off limits to them. It’s pretty normal around here to see an amazing piece of art from a New York gallery next to our kids’ art or a great authentic Mexican table topped with a Lego creation. We use every room in this house, and everything has its importance.”

The couple generously host annual charitable events, most recently to assist Patrons for Bellaire Parks in its mission to raise funds to develop the 5-acre, historic, former Teas Nursery site into the community’s Evelyn Park. “Such a good cause,” says Cassie.

And due to its distinctive look, the home, listed on the Houston Film Commission’s website, is occasionally used as backdrop for commercials and movies for a $500-per-day fee or, sometimes, for free.

Olympic figure skater Peggy Fleming shot a commercial for the anti-aging supplement CoQ10 at the Neumanns’ place. And famed baseball pitcher Nolan Ryan stood in their shower for hours on end warning of cracks and the merits of foundation repair.

“I got to sit down with Nolan Ryan for two hours at my table while he was getting his makeup done. We talked about the ’86 Houston Astros and where everybody is these days, his career, everything. He’s awesome. You can’t find a more down-to-earth guy,” says Spencer.

The experience is fun, agree Cassie and Spencer, though the family usually shoots off to their ranch in Chappell Hill while filming is being done.

And they aren’t receptive to all offers. They turned down Playboy’s request.

“Just didn’t see the need,” quips Cassie, “to have it on the house resume.” 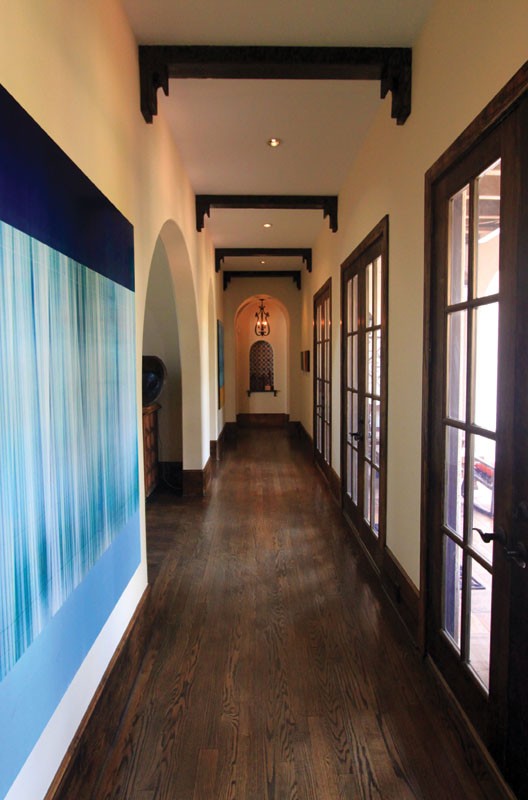 French doors let in the sunshine and highlight this painting by artist Thomas Zitzwitz. (Photo: patrickbertolino.com) 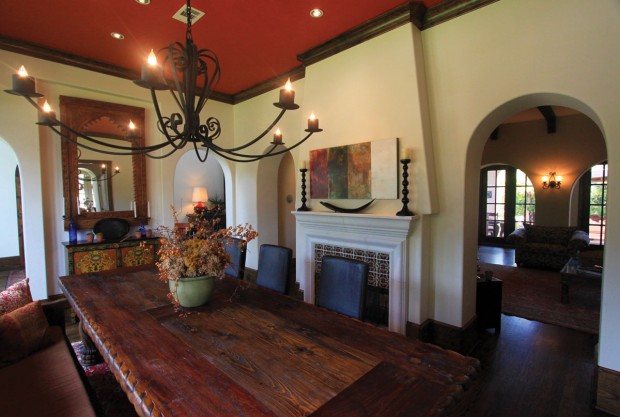 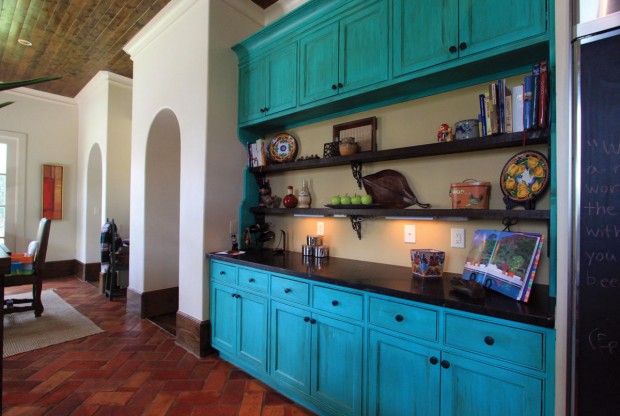 A faux-washed turquoise cabinet in the kitchen provides a pop of color. (Photo: patrickbertolino.com) 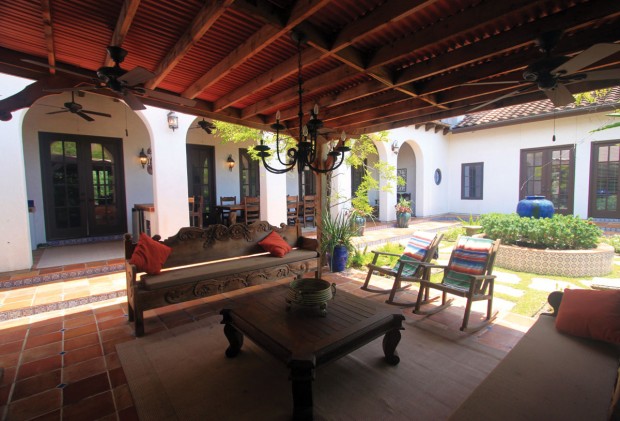 The open-air casita has furniture designed by Cassie and built by an artisan in Mexico. (Photo: patrickbertolino.com) 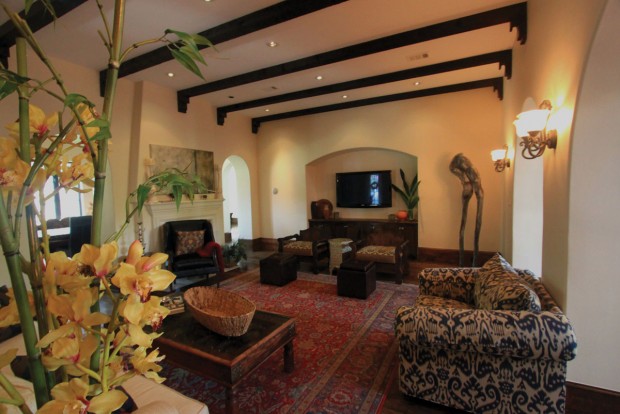 The den has Spencer’s favorite antique rug, from Istanbul, plus the family-favorite Man and Woman sculpture. (Photo: patrickbertolino.com) 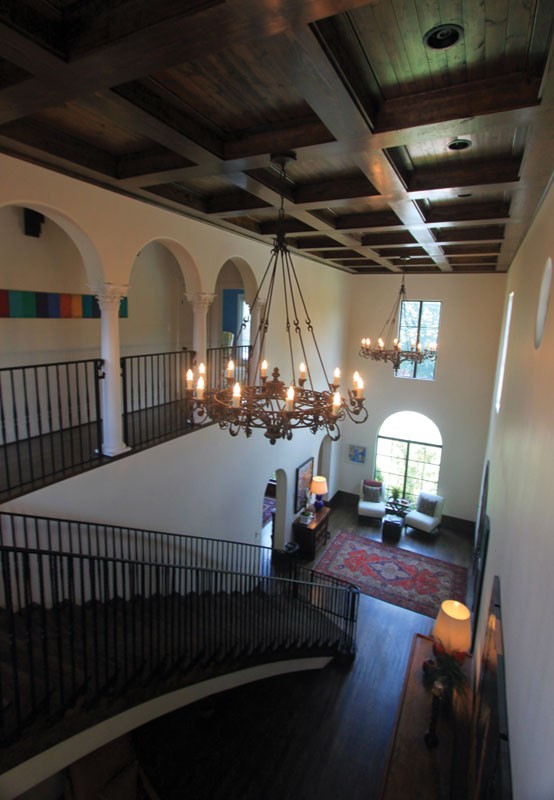 The home has an authentic Mexican vibe with wrought iron accents and a coffered ceiling. The upstairs painting is by artist Steven Alexander. (Photo: patrickbertolino.com)