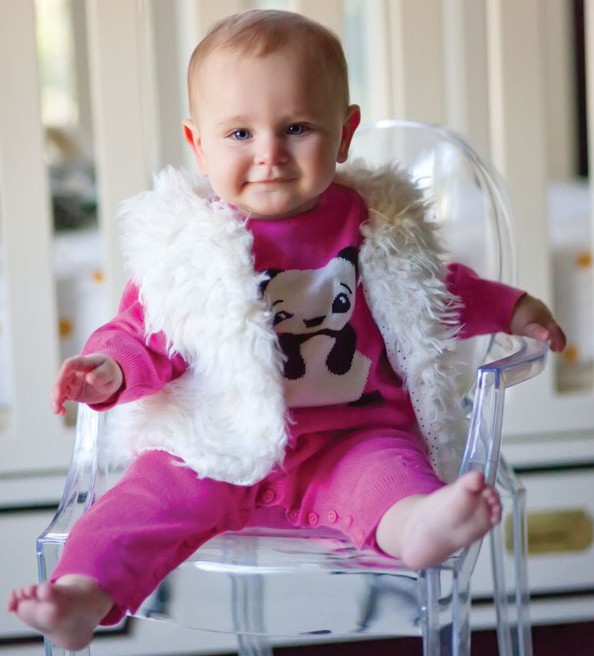 Frani and David Denenburg have a discerning eye for design. The vintage pommel horse repurposed as a bench in the couple’s 1930s River Oaks house serves as a clue.

So it follows that 11-month-old daughter Giorgiana’s nursery benefits from some spirited creativity. There’s no explosion of baby-girl pink here, no Mother Goose mural sweeping the room. This baby’s pad has the look and feel of their eclectic home. Except their little one gets to gleefully scribble on chalkboard-paint walls.

“She’s going to have so much fun doodling on them. But she has to get past wanting to eat the chalk,” deadpans Frani. “Then it’s free rein.”

Parents have creative license when it comes to today’s nursery design. Gone are the days of strict, gender-specific hues and nursery-rhyme murals. The cow has jumped over the moon too many times.

A fresh approach? Create a room with the personality of your home and add child-appropriate details and fun pops of color as accents.

“It was so much fun seeing it all come together,” says Frani, an attorney who describes her nursery as “Hollywood Regency style.”

She tackled the room with gusto once learning she was pregnant. It was ready for baby months early. “We wanted it to be gender-neutral because we didn’t know ahead of time if we were having a boy or girl,” she explained. “And more than anything, it had to fit us and be cohesive to the rest of the house.”

Husband David knew better than anyone what that meant. He carries a dominant, design-savvy gene. The professional renovator managed the remodel of their house and its addition. And the couple, with her parents, co-owns Station 3, a 1905 Houston fire station near downtown that David thoughtfully restored and converted into a venue for weddings, parties and other events.

“The man has vision,” Frani says.

Frani does too. She knew just the furniture to make the dream nursery materialize. “I had seen this particular dresser-changing table and crib set and knew immediately that it would go with our aesthetic. The minute I found out I was pregnant, I ordered the changing table, but we couldn’t find the matching crib. They had discontinued it.”

David came to the rescue. “He found it randomly in another color scheme while searching online, and, as luck would have it, it was at a store in Houston. He had the paint matched so it would go with the other piece. I was beyond-the-moon excited! I had my heart set on it.”

The couple chose furniture to grow with their baby. The crib converts into a toddler bed and then to a twin.

“Just seemed like the smart thing to do,” says Frani, whose once catch-all room with treadmill and desk morphed into snuggle central. A black, modern glider-rocker from Monte Design adds to the Hollywood glam look. And a gold pouf from Kuhl-Linscomb provides a shiny accent and pull-up spot for Giorgiana. “It was one of her favorite spots for testing her legs.”

A child’s transparent Lou Lou ghost chair by designer Philippe Starck was the perfect baby-shower gift for a touch of mod. “I love the way it’s so unobtrusive and light,” says Frani.

The self-confessed “bookaholic,” Frani is hoping Giorgiana will inherit her love of reading. “Books hold a very special place in my heart. I read to her all the time. This is our special place,” she says, pointing to the glider. Baby books are within easy reach, cleverly displayed on translucent, acrylic shelves mounted on the wall. A fun grouping of Giorgiana’s hats doubles as art on another wall.

A vintage sputnik chandelier adds a fun touch of drama while a fluffy, lattice-style rug from the online shopping venue, One Kings Lane, keeps things comfy underfoot. “But Giorgiana has learned that she can grab some fistfuls from the rug, so it might be replaced sometime soon,” says Frani.

For now, the wall’s chalk renderings come compliments of David, Frani’s cousin and their nanny. But they all eagerly await Giorgiana’s doodles. In the not-too-distant future, mom and dad might have to explain that the walls outside of the nursery are off-limits to baby graffiti.

“Yes, I can see it now,” says Frani. “No, honey. You can only draw on these walls. I’m sure that conversation will have to happen someday.” 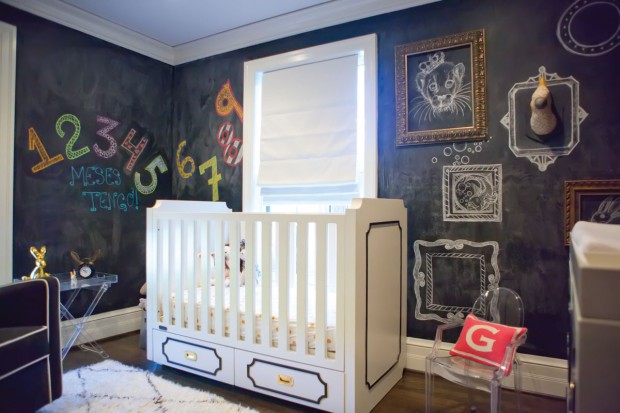 Giorgiana’s walls are her canvas, but for now, Frani’s design-student cousin, Rachel Coco, and the nanny, Alejandra Garcia, do the doodling. (Photo: stpimages.com) 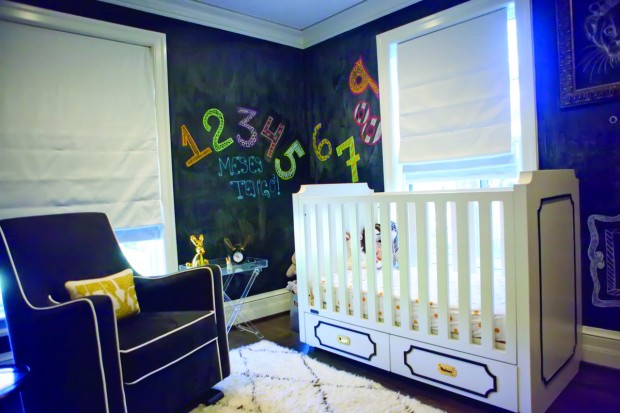 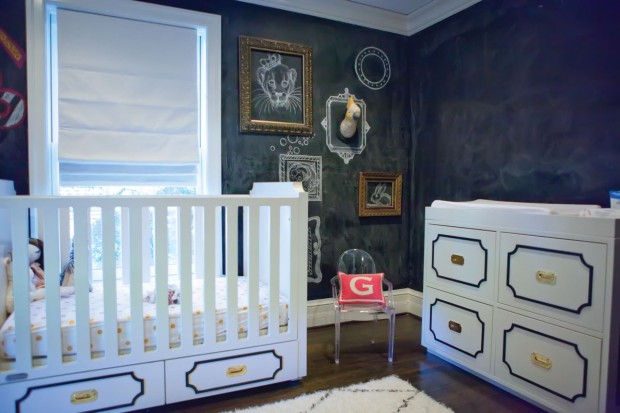 A modern dresser-changing table and crib were starting points for the dream nursery. (Photo: stpimages.com) 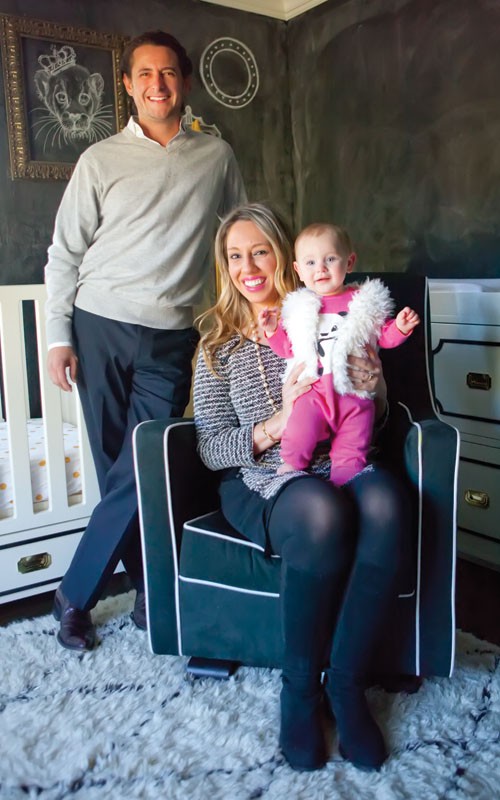