No fuss, no muss at impromptu gatherings 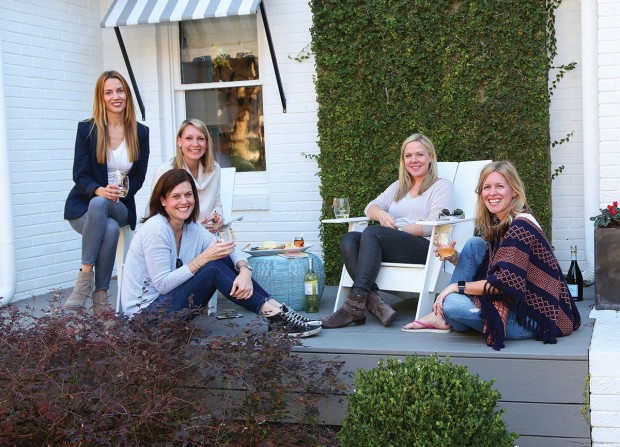 Sometimes a party just happens. No plans, last-minute, friends with free time getting together.

Kim Etheridge has got this model down. The mom of two girls and owner of the party store Emerson Sloan is forever ready for a crew to drop by.

“We used to always sit out in our front yard with the girls and blankets,” Kim says. “Then we built a deck, and people would see us sitting outside with wine and music. It kind of forces anybody walking by to stop and talk.”

But wine and music – “mostly rap, that’s the truth, unless the kids are making us listen to the Frozen soundtrack or something” – are just the start. “We have these two huge Adirondack chairs on the deck and a small, short table. Low and modern. So everybody just sits on the deck, and kids run in the yard.”

As an aside, Kim says, “I do love my chairs. They’re made out of recycled milk cartons and have beer openers on the sides (lolldesigns.com).”

She keeps her house stocked with drinks and snacks for drop-ins. “Alcohol is numero uno,” she says, “and then it’s nice to have a good cheese – brie or Manchego. My favorite appetizer is Manchego with this honey that has truffles in it. Buy it at Central Market or Whole Foods. It’s delicious.” She keeps juice boxes and Goldfish on hand for the kids.

“After that, you’ve got to have music and a couple of picnic blankets, and you’re good.”

The crowd usually gathers spontaneously – neighbors walking by stop and stay, others notice the activity and gravitate outside. “Or,” Kim says, “I’ll text friends and say we’ll be in the front yard after school. But it’s never a planned thing.”

Kim suggests a few things to make pop-ups easier. “There’s a thing called a Corksicle (corksicle.com) like a long icicle with a cork at the top that you leave in the freezer. It keeps open white wine chilled.

“I also love Govino plastic wine glasses (govinowine.com, or at Emerson Sloan),” she says. “They’re real thin so it doesn’t feel like you’re drinking out of plastic, but they’re shatterproof and dishwasher-safe.”

Ellen Elam, president of Office Effects, says, “I love when friends just stop by and drop in. It happens frequently with my neighbors Kristi Cooper and Robine Hendricks.”

A couple of years ago, Ellen and Kristi had lost family members and found “pop-ups” to be “an easy way to take a break and connect with someone who could relate but also not be in the middle of it, because we weren’t family.” Robine joined the group as a mini-escape after putting her three children to bed.

“We share a little concrete brick path between our houses,” Ellen says. “My husband made a little pop button light so they didn’t have to stumble – I mean walk – home after a glass or two of wine.

“Anyone can come. Sometimes there are just three of us, sometimes more. It is good for the soul to laugh, talk and solve some world problems in your PJs.”

Like Kim, Ellen likes to keep Manchego on hand, along with Marcona almonds, grapes, peppered salami and crackers. “Oh – and the wine balls!” she says. “They’re frozen plastic balls that chill our wine while not diluting it. (Find them at Bering’s.) Possibly one of the best inventions ever.

“Then we have a great chat session. I love, love, love having pop-ups.”

Pediatrician and mother of two Lindy McGee suggests the likely suspects for drop-ins: cheese, crackers and olives. And, “at Christmas time,” she says, “Annunciation Orthodox church sells spanakopita that you can stick in your freezer. It’s easy to pop out and heat up a few whenever you need them. Homemade by someone’s yia-yia!”

Another reader swears by Chick-fil-A tenders, piled onto a silver platter. Drive through, pick them up and “just add parsley!” she says.

Then there’s the pop-up that has nothing to do with wine or apps. “A few years ago, the Chronicle had an article featuring Blue Bell holiday flavors,” says nurse Lisa Blume. “I hopped in the car, ran to Randalls and bought them all. Emailed my ice cream-indulging buddies and invited them to come to an ice cream happy hour that afternoon. Guests were served a salad bowl with one scoop of each flavor. Opinions were shared, favorites declared. Mine was Pumpkin Spiced Pecan.

“It was a fun, totally spontaneous, delicious and fattening afternoon. Life is short. Eat ice cream!”

See our shopping list of what to keep on hand for pop-up parties.